Hollyn: A new name with a Christian pop hit 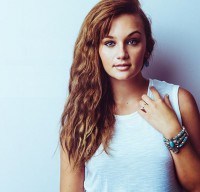 A couple of myths currently doing the rounds on the pop scene is that it needs a TV talent search to push an artist to music buyers' attention and that in the Christian music world the days of pop princesses of the calibre of Amy Grant are now over. The recent emergence of Lauren Daigle shows that a new wave of female talent is now coming onto America's Christian radio scene and now Lauren is joined by an Ohio-born singer who despite being pretty unsuccessful on American Idol has gone on to have a major Christian radio hit.

Holly Miller was born on 3rd January 1997 born in Waverly, Ohio. Hollyn grew up singing in church and like thousands of others entered Season 12 of American Idol. Although she made it to the Hollywood week rounds she was soon eliminated. As it turned out though she was spotted by Toby McKeehan, otherwise known as TobyMac, who as well as being the long established CCM star is the CEO of Christian music's Gotee Records. McKeehan was very impressed by Hollyn's R&B-tinged voice and her songwriting ability. Signed to Gotee, Hollyn was introduced to the Christian music public with the songs "Lights Shine Bright" and "Backseat Driver", both of which she co-wrote, on TobyMac's bestselling 'This Is Not A Test' album. Hollyn's debut single "Alone" was written by Hollyn, McKeehan, producer Bryan Fowler and Toby's son, rapper TRU who guests on the track and was soon playing on most US Christian radio stations. Hollyn's self-titled EP showed she was a talented songwriter, the lady co-writing five of the six tracks on her debut. Two tracks, "Hey Mama" and "Nothin' On You", were produced by the Grammy-winning production team COBRA (Dirty Rice and Joseph Prielzony) who also recently worked on the Lecrae hit album 'Anomaly'. In fact 'Hollyn' features a cover of Lecrae's Dove Award-winning "All I Need Is You".

Hollyn is about to go on tour across the US with TobyMac. She said, "It's a privilege for me to go up on stage and sing. God has given me this gift [so] that I can share my faith. The thing that makes me the happiest is meeting people after the shows. I love that time! Right now my life has never been so out of control, but it's a beautiful thing. The Lord is taking me somewhere. I don't know where he is taking me, but I'm excited about it."

I love Hollyn and all of her music. She inspires me. I've loved singing my whole life, she's inspired me by not being afraid to show her christianity and creating christian music (letting her light shine).

Hi Hollyn, I am just kind of looking for a pastor to speak at our church! I was looking o the internet at your site and came across that your father used to be a pastor. and I thought that maybe you could relay the message to your father that he could come here to our church and speak at it.
I think I read that he is retired from pastoring I guess. "But how do you ever retire from God am I right?" I am just wondering if you would write back?

God be with you forever.

Hey. I am Hollyns BIGGEST FAN EVER. I am a great singer and I hope that one day I can sing with her or either send her one of my songs. So yeah.

For more on Hollyn visit the Hollyn artist profile