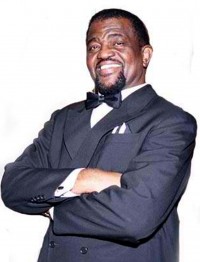 Jamaican music, at least as far as the critics go, has seemed inseparably linked to the intake of marijuana and the cult of Rastafarianism. So it's ironic that reggae music's greatest star, Bob Marley, was shortly before his death to embrace Christianity. And it's equally ironic that one of the founding fathers of rocksteady, the rhythmically hypnotic music which was the forerunner of reggae, Hopeton Lewis, should, after huge popularity in Jamaica, return to the Church of his youth and record numerous gospel albums.

Hopeton was born in Kingston, Jamaica on 3rd October 1947. Lewis's mother died when he was two and he grew up being looked after by various aunts, uncles and grandparents. By the age of six he was singing in church and by the time he was 15 his voice had developed into a rich baritone. He formed a singing group called The Regals. After some sessions at the legendary Studio One Lewis moved over to Ken Khouri's Federal Studios. There he recorded what is arguably the first rocksteady track, "Take It Easy" backed by Lynn Taitt & The Jets. When released on Winston Blake's Merritone label in 1966 it was a huge success dominating Jamaican radio for months, indeed years, to come. Hopeton recorded several more Jamaican hits in the '60s and early '70s including the first "herb" song ever recorded Jamaica, "Cool Collie". He worked for producer Duke Reid as an arranger and backing vocalist and in 1971 won the Festival Song Competition with his "Boom Shacka Lacka", released on Reid's Treasure Isle Records. By 1973 he was recording albums for bandleader Byron Lee's Dynamic Sound imprint before starting his own label Bay City Music in the late '80s. Despite his success though Hopeton was becoming disillusioned with the Jamaican music scene and after a Christian conversion recorded a reggae gospel album 'This Is Gospel'. A stream of gospel releases followed: 2008's 'Worship', 'Lay Your Hands On Me Jesus', 'Praise And Worship' and 'Country Gospel'.

Relocating to Brooklyn, New York, Hopeton presented a three times a week radio show on the community station for Grace Deliverance Radio and continued to release records on his Songs 4 Life label such as 'Voice Of Thanksgiving' (2012), 'Songs Of Faith (2013) and 'De Word Through Music' (2014). By the time of the latter's release Lewis was seriously ill and died at his home in Brooklyn on 4th September, aged 66, from kidney failure.

None of Hopeton's numerous gospel recordings achieved anything like the popularity of "Take It Easy" and "Cool Collie". But this most gifted of singers did get more than rocksteady hits or intake of herb could give him. As the title of his 2001 album proclaimed, Hopeton Lewis got 'Inner Peace'.

Was "Take It Easy" recorded in 1964 or 1966? I heard Gladston Wilson (on Jamaican radio) say that Lynn Taitt told them that he had to slow the Ska beat so the song could be properly sung for recording. So, was RockSteady born in 1964 or 66?