I Am They: New lineup for the folk rock worshippers from Nevada 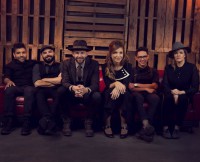 The folk rock worship band from Carson City, Nevada, I Am They are currently on the Cross Rhythms playlist with their engaging track "From The Day". After the release of their self-titled debut album in 2015 the six piece received a Dove Award nomination for New Artist Of the Year and with US radio now beginning to play the new single "Make A Way" clearly the band will be around for the long haul.

The group have just announced a change in their lineup. Read a band statement, " If you have been to any of our shows since last July, you may have noticed a new voice in the band. We are proud, honoured and pleased to announce that Abbie Parker has officially joined I Am They. She has a heart of gold and a voice to match! Abbie can be heard on our new radio single, 'Make A Way', and over the next few months you'll be able to get to know her through some videos we'll be posting online including a new music video for "Make A Way". Stephanie Kulla has chosen to pursue other interests and we wish her the best in her new endeavours."

The new lineup is Abbie Parker (vocals, harmonium), Adam Palmer (vocals, guitar, banjo, dobro), Matthew Hein (vocals, guitar, banjo, dobro, mandolin), Justin Shinn (keys, organ) and Sara Palmer (drums, percussion). The band was initially formed as a worship ministry called Solomon's Porch for what was intended to be a single night worship gathering on 31st October 2008, hosted at Calvary Chapel Carson City. After a positive reception from the local church community, the band continued holding bi-monthly worship gatherings. After receiving an offer from a local Christian concert promoter to open for CCM star Matthew West in January 2009, the band began to write original material and formally changed their name to I Am They. The name is inspired by John 17 - created with the intent to adopt on a personal and individual level. As Jesus prays in this chapter, he consistently refers to his disciples as "they". It is important to each band member to be the "they" that Jesus referred to.

The band signed to Provident Label Group in the summer of 2013 and went in to the studio in January 2014 to record their self-titled debut at Yackland Studios in Nashville with producer Jonathan Smith. In winter and spring of 2015, the band were a part of the national touring Rock & Worship Roadshow alongside MercyMe, Crowder and Group 1 Crew, followed by a tour with Matt Maher on the spring leg of the Saints & Sinners tour.

Said vocalist/guitarist Adam Palmer, "We were made to do this. Music ministry is our heartbeat and pulse. God has been growing dreams in us we didn't even realize we had. We are just trusting God and following where he leads." Speaking about I Am They's current Cross Rhythms radio hit Matthew Hein said, "'From The Day' is a salvation celebration song. There's great testimony of salvation in one form or another in all of our lives so we are lifting up those celebrations. We had to have a song that was getting excited about what God has done in our souls everlasting, the eternal part of us. Some of the lyrics came out of Revelation 21 speaking of Heaven where brilliant light is all around and it says there's no need for a sun because Jesus himself takes the place of that shining light."