In December, UK Christendom's favorite band IONA recorded three of their gigs for a double live album. Mike Rimmer watched them do it and spoke to the band members. 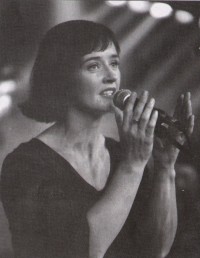 The Que Club is one of Birmingham's trendiest nightspots. On a Thursday night in December, the former Methodist Central Hall is one of the coldest venues I have ever visited. Cold, stark and empty as Iona gather for tonight's gig, they have already struggled to move their gear up three flights of stairs into the hall. Nerves are a little rawer than usual as this is the second of three occasions when the band are recording for the double live album 'Heaven's Bright Sun'.

The club is situated in the city's legal quarter and many of the furnishings remain from when the club was a church. Behind the stage a black curtain hides the huge organ that once dominated the worship here. Upstairs the balcony seating remains the same as when the faithful positioned themselves in the pews. As an aid to atmosphere, a giant parachute has been stretched across the balcony to make the area in front of the stage seem more intimate. An unusual venue. Later when I meet Chris Eaton he reminisces that he had played the venue when it was a church.

The downside of the club is that there is a sound curfew. No noise may be made before 5pm or after 10.30pm. To make matters more complicated, the fire regulations mean that the mobile recording unit cannot be sited outside the hall. The pressure is on. A few days later the band will face similar difficulties in Shepton Mallet because the council have organised a craft fair for the afternoon. Iona will be able to get their gear into the venue but their sound-check will be cut short.

Back stage in a freezing dressing room in Birmingham, I talk to Dave Bainbridge to find out why the band is recording a live album. He explains, "We felt a lot of the material from the first two albums has progressed quite a bit since we originally recorded the songs, particularly 'Iona'. When we did that album we'd only done a handful of gigs. But now the band has become a six piece it just felt right to put down the new versions of the old stuff as well as some of the best things we've been developing recently in concerts, such as some Irish reels."

Iona have developed a reputation as a live act with their stunning musicianship. I wonder whether the live recordings were nostalgia or a time for redefinition. "There are certain tracks like 'The Island' and 'Flight Of The Wild Goose' that sound better now live," Dave enthuses. "They've got very much more energy than the studio versions. When we recorded them originally we didn't have a band as such. We got Terl to play drums but we also did our parts separately so we weren't actually playing as a band. The fact that we did that means that there is so much more energy when we play live. Also we want to capture some of the energy of being at an Iona gig. I think there's a big difference between hearing songs from the studio versions and hearing the rawness of the live album. We aim not to do any studio overdubs so that people get the idea of actually being at the concert."

The fact that the band aren't adding studio overdubs gives the album an honest feel. It also gives the band a dose of red light fever, knowing that any mistake can spoil an otherwise perfect live recording. As I talk with Dave I can hear down the corridor Terl Bryant and Troy Donockley playing some simple Irish folk instruments. Later they will open the Birmingham gig with a simple low key performance of these pieces.

So does Terl ever find it a strain playing live? "Sometimes I get a bit concerned," he confesses. "If I've got four real belters in a row, because I feel I want to put everything into those pieces, I might need to drink a bucket of water and hope that the drum sticks don't fly out of my hands!" Thankfully, Terl holds onto his sticks at the Birmingham gig but as we will discover later, he doesn't manage to completely avoid disaster.

The idea of making a live album began in the summer of 1996 as Dave Bainbridge explains to me, "We got talking about it back in July when we were in America and from there we decided we'd get a few gigs together in December and record."

As simple as that! However, since the original decision to make a live album, Iona have received very positive feedback for 'Journey Into The Morn', particularly since Q magazine made it one of their Top 50 releases for the year. So is a live album the best move commercially? Wouldn't it be better to make another studio album to build on the success of the last album?

Dave Bainbridge is convinced. "Possibly in business terms," he asserts. "But we've never been particularly motivated by the ideas that the record industry usually has. That's not the way we operate. We've tried to follow God's leading for the band and often that's slightly different from the perspective of a record company. It just seemed the right time to do the live album."

Around five o'clock singer Joanne Hogg arrives with Alliance Music executive Dave Bruce. Pre-gig sound-checking in a freezing, empty hall is not a glamorous business. Dave Bainbridge plays a synthesised flourish and Joanne teases that it reminds her of Star Trek. Recording engineer Nigel Palmer's voice emerges from the gloom at the back of the hall and announces that they can start playing in 20 seconds. Joanne slowly starts to count to 20. Everybody is cold! Joanne hops around trying to keep warm, singing with her coat on. The band are apprehensive that later the heat of the concert will cause their instruments to go out of tune. Such are the challenges of making a live album.

While the band sound-check, Dave Bruce and I catch up with the latest news from Alliance. Always a firm fan of Iona's music since their formative demos, he originally signed the band when he worked for Word Records and is a fervent supporter of their work. But how does the company feel about the live album? "We've been encouraging them to go down that road because the format of the band has been pretty steady for a couple of years. They're playing like I've never heard them play before. They're just astounding live and we felt it was the right time for an Iona live album."

Again I wonder whether he had any thoughts about whether the band should be building on the success of the last studio album with another studio work. Dave responds, "Alliance look after the Christian market rights for the band and they are very established there. I think it's key from a Christian market point of view than it is from a mainstream market point of view. The two audiences are a little out of tilt with each other because the secular activity is growing fairly rapidly. From a Christian market's point of view it is perfect timing because they are Europe's best selling Christian band and because of what they do live, people love to hear live renditions of their material."

The sound-check is over and it's time for dinner. Terl Bryant invites me to sample Iona's backstage catering which offers a choice of meaty or vegetarian dishes. My wife Pip and I get into a huge theological debate with Troy and the concert promoter and we end up batting ideas around while eating dinner before Troy is whisked away to discuss business, presumably plans for his forthcoming solo project.