Iona: The Celtic fusion band celebrate where the wild things are 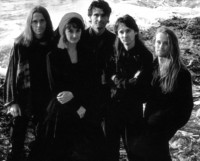 In the eerie luminescence of the early morning mist the wild goose sees the Isle and swoops downwards. After the blue-grey of the ocean, the red-browns and deep, deep greens of the Isle seem almost luxuriant - gorse and heather earth and peat spread in graceful undulating lines. Sheep graze between jutting crevices of sun-glittered granite while high on a hillock a lone grey cross casts a shadow across the blueish ground. All is peace. The wild goose swoops slowly, lovingly across the Isle.

Splashes of wild flowers nestle between the terrible beauty of the lichen-covered rocks. The hills lie in a flawless stillness unshattered for a millennium. There on the ridge of a hill a solitary figure stands listening...or praying. He gazes at the soaring wild goose. A haunting song drifts on the faint breeze. "Safe within these shores/I feel no conflict here/I feel my spirit soar within this sanctuary/Iona, Iona."

The Wild goose flies, up and past the rock-strewn beach where waves ebb and flow against the jagged majesty of rock, out across the turbulent ocean. Soon there is land again but now electric pylons and cars; shopping centres and motorways converge in a tangled rush of self-absorption. It's dark now. Still the wild goose flies on into the city. Over the twinkling lights and concrete and down, down to find the street.

In a house, lit by a single bedroom light, a lone figure sits hunched by the stereo. The song sweeps in haunting beauty around the mean bedsit. Suddenly the hunched figure stands, either listening or praying. He sees the wild goose...

Iona the band began with a severe bout of spiritual burnout. Dave Fitzgerald had given his all too Christian music. With have-sax-will-travel zealousness he'd piled up the album credits and the gigs. Adrian Snell, Phil and John, Martyn Joseph, The Fat Band, John Pantry, Graham Kendrick, Nannette Welmans, Bryn Haworth - the list was endless - and so were the miles on the motorway. Dave was very very tired. And not just physically.

The years of grassroots ministry had taken their toll. Physically Dave might have had a full tank as he sped up to Glasgow to attend the World Baptist Conference, but spiritually Dave was running on fumes...and he knew it. He decided to take the coastal route via Edinburgh. Suddenly, he saw a name on a signpost which sparked off something in his memory banks - Lindisfarne. Place of hippy pilgrimage and new age affectation But something else. What was it? Didn't Lindisfarne have something to do with the birth of Christianity in Britain? On sheer impulse Dave made a 100-mile diversion to go to the place whose very name stirred such indescribable emotions in his tired spirit. "It's impossible to articulate fully what happened to me at Lindisfarne," remarks Dave. Suffice to say that in the solitude, and the terrible rugged beauty of the place God met with me, touched me, refreshed me, lifted me up. And He put within me a hunger to learn more about the spiritual roots of our nation. Over the next few months I began to trace the origins of Christianity in Britain and went to visit Iona where it all began. Again I had a real sense of God's presence in that place."

Far from being some unfocussed mystical experience, or some academic dredge into early church history the spiritual and aesthetic experiences gained at Lindisfarne and Iona became the catalyst for Dave to propose to fellow musician Dave Bainbridge that they form a band.

Bainbridge, a brilliant keyboard player and guitarist, was like Fitzgerald, a music veteran. He'd toured with Sheila Walsh, Phil Keaggy, Graham Kendrick, Dave Markee and a dozen more and had co-produced Adrian Snell's best selling 'Alpha and Omega' album. It was while touring with Snell's 'Song Of The Exile' that the two Dave's began to compose Dave Bainbridge numbers.

"When we first had the idea we were both getting a bit frustrated that we were playing other peoples music all the time. We both felt that we could be doing something of our own that was separate from all this. The original idea was to get something of an instrumental nature together.

"When Dave went to Lindisfarne it was a bit weird really. Like, Dave is quite an outgoing person and for him to go somewhere and be quiet for a while is unusual. But when he went into the history of Christianity in England, and the history of Iona, I saw that there was something there that could inspire us musically.

The instrumentals that began to emerge as the two Dave's toiled over the Portastudio were nothing short of awesome. Eerily beautiful Celtic airs fused with pumping jazz fusion rhythms, dizzying layers of synths set off by Dave Fitz's declamatory soul sax or Irish whistles. The invasion of Tiananmen Square by the Chinese Government troops, brought fresh inspiration with tinkling oriental rhythms and Chinese flutes. But it was the eerily plaintive Celtic-tinged mood pieces, stemming directly from the sights and sounds of Lindisfarne and Iona, which gave the two Dave's new compositions cohesive-ness. And the final piece of the eclectic musical jigsaw fell into place when they asked Joanne Hogg to join Iona. Joanne, like the two Daves, moved within the Adrian Snell axis and had contributed the exquisite lead vocal on "Child Of Darkness" on Adrian's 'Alpha And Omega' rock opera. Ballymena born Joanne has trained as a doctor and vividly recalls that earnest request to leave the security of a career in medicine for the uncertainty of a rock band.

"There was this long period after we'd worked with Adrian when we didn't know what each other was doing and then out of the blue Dave rang up and mentioned this concept...all inspired by the island Iona."

Columba, the first Christian saint of Iona set foot on the rugged island of Iona in AD561. The monastery he established there was to become the base from which missionaries set out to bring the gospel of Jesus Christ to England and Scotland.