Iona: The return of the Celtic group

The Sabbatical's over, they're readying themselves for the Cross Rhythms festival and Mike Rimmer even got them to interrupt their rehearsal. IONA are back! 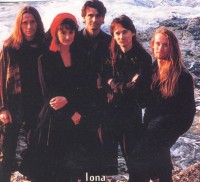 On a drizzly day in late April, lona have set up camp in an old Victorian school, now a community centre in the Yorkshire village of Waiter. The mission? They have four days to prepare for their May tour to launch their new album 'Open Sky'. The band have ended their sabbatical and are clearly excited to be playing together again.
The hall has musical equipment spread across the floor and Dave Bainbridge's area appears to be a mass of effects pedals and technical gubbings that allow him to do some amazing things. He strums some chords on an acoustic guitar and creates a looped chord pattern before strapping on his electric guitar and adding atmospheric guitar over the top of his acoustic chords which continue to loop out of the speakers. He jokes about advances in technology, "All the instruments we used to use were steam powered! There's now virtual technology where a box I have can replicate different amplifiers and acoustic guitars so I can get all those sounds from my one Ibanez electric guitar so the amount of sounds I can reproduce live is phenomenal!"

Rehearsals are finished for the day and the band microwave some food, leaving Dave to sort out some technical challenges he's been wrestling with, and head off to a pub for a chat. Joanne Hogg has already set off to cycle the four miles to the Wolds Inn. The rest of us hop into bassist Phil Barker's car, eventually catching up with Joanne just as it's started to pour down. She's feeling the damp and explains that most of her ride was uphill!

The band debate the temperature of Old Speckled Hen and tease Dutchman Frank Van Essen who confesses he doesn't like warm British beer. The merits of Seabrooke's crisps are expounded and Troy Donockley, unlikely though it seems, has a relative who is a potato inspector! Troy offers us expert advice about the quality of different brands of crisps! Despite lona's rather earnest image, collectively the band are fun to hang around and our conversation is peppered with humorous asides, laughter and some ribbing for me missing the 'Woven Chord1 live recording.

With a round of drinks on the table, it's time to get down to business, I suggest that 'Woven Chord' was simply a stop gap to end their sabbatical because they hadn't completed work on 'Open Sky'. Joanne laughs and agrees, "Absolutely!" So was it her fault for not writing enough songs? "I don't think you can entirely blame me. I still haven't written enough songs for it but there you go. Creativity is not one of those things you can just switch on when you need it and sometimes the more pressure there is on you to produce it, the less able you actually are."

Just as we chat, Acker Bilk's "Stranger On The Shore" comes over the pub PA. Troy fantasises about having Bilk join lona before I point out that the trad jazz clarinettist is actually dead! But it brings us to the line up changes that occurred in the band during the sabbatical. Phil Barker with shades of 'Spinal Tap' jokes that Mike Haughton was lost "in a bizarre gardening accident." Jo chips in, "It's not true that we lost him, we know exactly where he is! He left the band to work more with Cliff Richard. And guess what - Cliff has taken a sabbatical this year too!"

The curse of Haughton? I suggest that every band he joins takes a sabbatical! "That'll teach him!" Troy laughs! "He was touring a lot and he kind of drifted away." Phil elaborates, "We'd done a lot of touring without Mike so as a consequence his parts had been taken by other people. So for writing this album we didn't see a place for another instrument anyway so Mike's leaving didn't have a negative effect." Troy takes up the theme, "It's definitely changed the complexion of the music not having the saxophone in there. I do like the saxophone but I always felt that it was an element of the band that was a bit incongruous. Saxophones are a pretty jazzy instrument and what we're doing isn't jazz." Joanne adds, "Mind, some of what Dave does on the guitar from time to time does have some jazzy influences." Troy retorts, "But when Dave does that he has to have a big creamy flan in his face and then he stops and doesn't do it anymore!" So what does Troy make of violins since the band's new drummer also plays violin? "Oh, they're perfect!" he responds with a cheeky grin.

Troy also gives an update on the whereabouts of former drummer Terl Bryant. "With Nick Beggs, he's rocking all over the world with John Paul Jones who was in Led Zeppelin." Jo elaborates, "He'd been in the band 10 years, he has a family to support and I think he felt pressured to make a commitment to lona. At times when there was other good work coming along that he couldn't turn down, he ended up in a conflict. He loved the music and band but he always had a desire to try and be a Christian musician in the secular workplace."

For its members, lona is clearly a labour of love but financially it isn't easy. Troy admits, "It's difficult to juggle the love of the music and the stark reality of having to pay bills." Joanne adds, "Everybody who's been in the band and left has told me that they do miss it." Long time fans of lona will know that new boy Frank Van Essen isn't new at all! He explains, "I first joined the band in 1991 but being in Holland was a bit of a problem. Now I am a full time musician but then I was working in a conference centre four days a week so I had to turn down too many gigs. l met with Dave and Phil at a conference a while ago and Terl had just announced that he was leaving the band and it was a natural process for me to rejoin."

After more than 10 years together, the time off has allowed the band to deeply consider what they are trying to do. Joanne explains, "All we've ever tried to do is make good albums and write beautiful music. We've tried to be creative and original and not be repetitive. I think there's something distinctly lona about the new album but there are new things in it for us and new approaches and sounds."

Troy adds, "As a band it's effortless when we get together to make music. It's a natural thing for us. But it's hard to get support! We get brilliant support from the fans but because what we do isn't distinctly mainstream and we don't have two and a half minute pop songs and dance about in little pink shorts, it's difficult to keep it on the rails." Joanne continues the thought, "I see us as misfits because we don't fit nicely into the contemporary Christian music scene, especially in America and yet because we originated in Christian music and have that label, we're misfits in mainstream as well."

Troy is warming up to the discussion and clearly it's a bit of a hobbyhorse for him. "The problem with us is that with the secular music scene we can fit in there! But in the background, we have this baggage which we don't subscribe to because we're free to make the music we like." He adds darkly, "It feels like we have certain elements holding us back when we'd like our music to be more widespread so as many people as possible can hear us. This music isn't designed to be restricted and to constantly be labelled a Christian band and then not be fully understood in the Christian market is a bit frustrating. We believe we can go right across the board but we find others telling us we can't. But we can!"

The band have been encouraged in the past by positive reviews from Q magazine and have been invited to play at a Prog Rock festival in Mexico next summer. Even Polish Metal Hammer magazine liked 'Woven Chord', giving the band a rating of 4.5 out of 5. The same issue of the mag only gave Marilyn Manson a 3.5 rating!

Listening to the new album on the car stereo as I drove through the Yorkshire countryside only made it come alive and one particular song, the mysterious "Castlerigg" seemed particularly evocative. Troy wrote the piece and explains, "It came out of a journey north - it's a Neolithic stone circle in Cumbria. We stopped off there on a particularly dramatic day and there were a lot of intense feelings going on that day. A lot of the inspiration was the pleasure of friendship and the joy of being alive and with friends that day."

Troy's role within the band is increasing and some fans might be surprised to find that he is not a Christian. "That's right," he agrees. "It's probably quite a shock to some people but it's no problem for me personally. Music transcends all labels and I'm in a band with fantastic musicians and friends which is why I am there and that's more important than any individual's thoughts on anything. It affects different people in different ways. I get mixed responses when I tell people because lona is seen as a strictly Christian band but I love the effect that the music has on non-Christians and as a non-Christian I get a really good first hand experience of that."