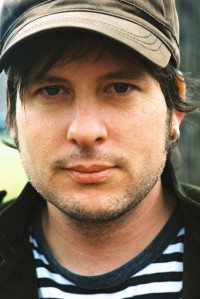 One of the surprise turntable hits for Cross Rhythms radio this summer is the lilting, mandolin-driven songs "Spring" by J D Roth. Jean-Daniel Roth is hardly a newcomer to music though it's doubtful whether too many Brits will have heard of him until the delightful retro acoustic pop album 'Invitation: The Final One' arrived at Cross Rhythms Villas as J D lives and works in Switzerland. I asked J D to give me some info about himself. "I was born in Geneva in the French part of Switzerland. I grew up near Basle in the German part of Switzerland. My father is a Jehovah's Witness and my mom is a Christian. I don't know exactly when I became a Christian. But I knew very early that I didn't want to become a Jehovah's Witness. Like always, it's grace that I found Jesus. I started to go to church at 15. God needed a lot of patience to convince me that he's a good father. The song 'Easily' on 'Invitation: The Final One' speaks about that. I was never a big listener of music, I didn't have the money to buy records, but I was always interested in composing music, which I started at the age of 15. I also played classic guitar and composed some arty modern stuff. But everybody was running away when I was playing it. . .so I started to write songs."

In 1998 the singer/songwriter released a solo album but then formed a band, Eleven 25. Said J D, "We recorded two albums. Eleven 25's debut album came out in Germany, Austria and Switzerland. We did some touring in Italy, Germany and Switzerland. Then I started to go solo again. It was just time for something new. Struggles with the management and the record company took a lot of energy and we were all happy to start something new."

The resulting album 'Invitation: The Final One' has almost a Crosby, Stills & Nash west coast rock sound about it though J D denies that the sounds of '70s California were ever an intentional influence. He said, "I don't listen to a lot of music. I don't have time. I'm busy enough to get my stuff done. I don't listen to music when I have a bit of free time - it's too dangerous for me, because my head starts to work when I'm listening and at the end I'm sitting there and writing new songs. I need a break sometimes. The last song I wrote is called 'A Truck Full Of Diamonds' - this little 'gangster' stole my sleep for three nights and continued to play in my head for 14 days. It was a really painful experience. I don't know who influences me; honestly. I have developed a certain strategy not to be influenced by other artists. If I like a band I listen to the record just one time and then give the CD away or never open it again :-). I did this with Coldplay. Everybody sounded a little bit like Coldplay. . .but not me."

J D is pleased that a track from his album has been selected for radio play from the hundreds of independents and imports received by Cross Rhythms. "The fact that an English radio station plays 'Spring' gives me a good feeling. It doesn't happen every day. That you chose 'Spring' doesn't surprise me. It's also played a lot in Switzerland."

The songsmith talked about three songs on his album. "They are all my babies, I like them all. I particularly like the song 'Mind The Gap'. I travelled to London at the beginning of the recordings, to meet a DJ from New York called Cosmic Rocker. He played at the Cargo Club in London and I was just on my way to Bristol to visit a friend. I stayed in London a few days and wrote a lot of lyrics, recorded some sounds in the Tube which I used in the production later. Another one I like is 'Easily', it's very personal and really it's my story. I also like to listen to 'Until That Day' - I became the father of a wonderful daughter four and a half years ago."

J D has been busy in his homeland plugging 'Invitation: The Final One'. "I have played around 30 gigs in Switzerland in the last six months. Also, I've travelled twice to Italy, where I played in the area of Lake Guarda, and a few times to Germany. Currently I'm working on a single for the organisation Weihnachten im Schuhkarton. In England and USA it's called Samaritan's Purse. The song is called 'A Truck Full Of Diamonds' and will come out in Switzerland in October."

one would think if you call yourself a christian you would know the definition, which is to be a foot step follower of Christ, so what would he be doing if he came back to earth today, exactly what he did before he left because that was what he commanded the christians to do, if you cant do that then you cant very well call yourself a "christian" he would'nt

Like JD my dad remained a Christian when my mother became a Watchtower Witness. It was tough go grow up with Mom waging World War III in our household but through God's grace and His grace alone I am a born again Christian.

I look forward to hearing your music, JD.

I have had experience with Jehovah's Witness relatives. They kind of live double lives. Being afraid of the other members of the congregation and elders while living it up with so called 'worldly friends' when away from the Witness influence.

I found it interesting that the singer talked about his faith. The article mentioned that he came from a âmixedâ family where one parent is a Jehovah Witness and one is a Christian. I have found this is rare because usually the Jehovah Witness parent breaks up the family if everyone does not become a Jehovah Witness.

I am personally glad the singer made the right choice and avoided the Jehovah Witness organization.

I can't help but wonder if JD's father shuns him since he won't become a Jehovah's Witness. I lost my family 25 years ago. They are never allowed to speak to me again, per the Jehovah Witness organization rules. It has been heart-breaking. Why are they allowed to choose their own spiritual path, but I'm not? The Watchtower organization, parent to Jehovah's Witnesses, dictates and ruins family's lives. I am one of literally millions worldwide being shunned.

I would be interested in learning how the religious divide in JD's family has impacted his life or the lives of anyone else reading this.

Brenda Lee, author "Out of the Cocoon: A Young Woman's Courageous Flight from the Grip of a Religious Cult" www.outofthecocoon.net

Your choice to become a Christian saved you a lifetime of grief. I was a Watchtower slave for 43 years before I found Jesus and became a Christian.
Where can I buy a recoding of Spring and also Invitation, the Final One.
I am happy for you

The following website summarizes over 250 lawsuits filed by Jehovah's Witnesses against their Employers, and/or incidents involving problem JW Employees:

The following website summarizes 300 U.S. court cases and lawsuits affecting children of Jehovah's Witness Parents, including 100+ cases where the JW Parents refused to consent to life-saving blood transfusions for their children:

Good to go bravo to you J D

I was born into the Jehovah's Witnesses and got out too.