One of the most popular female vocalists on America's CCM scene JACI VELASQUEZ is still seeking to grow in Christ. Tony Cummings reports. 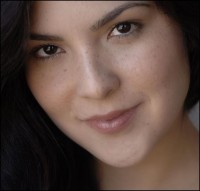 When Cross Rhythms last featured Spanish American singing sensation Jaci Velasquez her self-titled album had just been released. Now her venture into Spanish language Latin pop 'Llegar A Ti' has won all manner of awards and established her in that marketplace while her new set of classily produced Christian pop 'Crystal Clear' is currently a huge American hit. Behind the surface though, the 21 year old singer has experienced some personal difficulties. Family issues she declines to discuss have taken their toll. She spoke recently to CCM Magazine, "2000 has been a growing up year. Painful, but healthy as well. Had this happened to me two years ago, I would have quit everything I was doing just for the responsibility I feel. I couldn't have handled it. I know God lets things happen for a reason, I just cannot figure out what he was thinking!" she laughs, hiding the seriousness of her confusion.

Jaci's move into the Spanish language arena was fraught with difficulties. Three songs into the recording she unexpectedly stopped the work. "I didn't like who I was becoming and I could not figure out why I was doing the record. I was getting my eyes off who I was and who I was for Christ. I was, in my mind, becoming my own little star. I was given a big career so young. I'd do it all over again, but I can understand those child stars who become drug addicts in their mid-20s, like after a successful sitcom that failed." Jaci says it didn't make a difference that she made her teen success in Christian music. "You're given so much so young. You think you're invincible and you go, 'Wow, I really think I'm something.' I tend to be a little self-destructive when it comes to certain things in my life. For me, it means not caring what people think about me. Like, I'll start to walk on stage in a tight pair of pants and my mom will go, 'Don't shake your hips,' and I'll do it 10 times worse just because I know people are going to get upset with me!" she says firmly and defiantly. "Later I think, 'What a dummy! What was I thinking?"

Velasquez decided to make a change this past year. "I had to suddenly decide, why do I believe what I believe? No one's going to watch over me, no one's going to make sure that I go to church right now. No one's going to make sure I pray. No one's going to make sure I do my devotions. I have to do it. I can't let my relationship with God rely on what my parents tell me anymore. Our relationship with God just has to become our own. It's such a great thing, such a great place to be. It's that pruning stage." Liking herself again meant centering herself. There was more devotional time, more reading time. But it was the relationships around Jaci that helped the most. "I just really focused in on the people that really care about me, my mom, my brother, my family. I just didn't share my time. People probably think I'm a snob because I don't spend time with people anymore. I'm more private now." Centering also meant avoiding those rebellious moments. "I really just had to quit being an idiot! Quit being self-destructive. I still tend to be at certain points and I really have to be careful."

Rediscovered, Velasquez knew why she needed to record a Latin album. "It's like when you fall in love. You just know. It's not like I heard the voice of God one day while walking through Kmart. It's just that I've always prayed, 'Open the door you want me to go through and close the ones you don't want me to go through.'" Hand of God or not, doors blew open. Velasquez was signed by Sony Discos, the leading Latin record company - boasting names like Ricky Martin and Jennifer Lopez - and released in 1999 'Llegar A Ti'. The record was certified platinum (250,000 copies sold, Latin market) in short order and nominated for a Grammy for Best Latin Pop Performance. In its Latin Music Award categories, Billboard nominated her for Female Vocalist Of The Year and tapped Velasquez for New Artist Of The Year. A number one single on Billboard's Hot Latin Tracks and Latin Pop charts for "Llegar A Ti" (the first Christian artist to do so) made it official: Jaci Velasquez had exploded into a certified Latin pop artist.

Jaci has received a considerable amount of criticism from the more conservative elements in the Church, claiming that her recent photo shoots have been inappropriately sexy. Was she bothered by the criticisms? "No, I'm not because I am not trying to be (sexy). There's a difference when you try to be and when you just go with your natural female, feminine persona. The difference is when you don't have to show everything in order to be considered sexy. It's OK. God made us (feminine)." And this time she's not trying to be rebellious. "I'm trying to still be 21 years old and not be a complete bore! I know I was given a platform to inspire people to do great things, to live out their dreams... and I am going to try to do that to the best of my knowledge. If I offend people along the way, Lord have mercy because I'm not trying to."

When it comes to her English records Jaci Velasquez was a teen pop tour de force before it was vogue to be one. But don't fold her into that camp today. "I'm not a teen! I'm 21. I'm too cool!" she says with a sarcastic hair flip. "She would be if she could dance!" jabs her brother Dion, with whom she shares a house. Even with a few salsa lessons, it's doubtful Velasquez would be content doling out bubble gum pop. "Jaci is older. She has something to say now," says 'Crystal Clear' co-producer and long-time Velasquez collaborator, Mark Heimermann. "She doesn't have to express herself. She has life experiences to draw from."

While 'Crystal Clear' is the most current sounding Velasquez record to date, it is also the most mature and personal. The Latin pop "Escuchame" finds Jaci speaking to listeners words her mother said to her: "Listen to me. Don't make the mistakes I made." The vibey mid-tempo ballad "You're Not There," a song asserting God is eminent but also intimate, is one of two Velasquez wrote with Heimermann. For the first time, throughout recording, Velasquez influenced nearly every part of the process - from production to song selection. "For example," says Heimermann, "the song, 'Crystal Clear'. That song pushed her buttons. It's a song that says something she's passionate about. We all liked it, but she loved it and we were drawn to love it because of her passion in her heart and eyes for that." "I had a lot of ideas when it came to backgrounds, weird stuff to do," says Velasquez, "whereas I never actually had ideas before. I was never truly interested."

A by-product of her investment may be Jaci's noticeably stronger vocals on this record, a quality for which she credits Heimermann and co-producer Rudy Perez, currently the hottest Latin pop producer in music. "Rudy and Mark stretched me a lot on this record," which Velasquez says had not happened on her previous Christian records. "I think everyone thought I was 16, 18 years old: What could I do? They always went, 'Come on! You can do it! Drop your little pain-in-the-butt pride and just sing!' I was being cautious," she admits. But on this record, "I competed with myself, with being the best singer I could possibly be." Heimermann adds, "I think she is settling into a place where she is feeling comfortable and confident being the same person onstage and off." "I think it's simple," says Jaci. "I just grew up. I actually appreciate what I do."