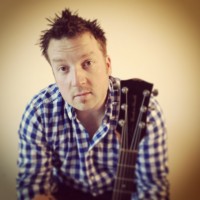 Even hardcore devotees of Britain's Christian music scene would be hard put to recognize the name James 'Jimmy' Adams. Yet this fine guitarist and pretty good singer was once an omnipresent on the Christian festival scene when as a member of thebandwithnoname he toured all over the UK and around the world. James has now forged out a new music ministry for himself following his relocation to the USA and at the end of last year released his debut EP 'Waiting Here'. Cross Rhythms caught up with James in his Columbia, Missouri, home to get his story. The interview began with the singer/songwriter filling in some biographical detail.

"I was born in Brazil. My father is an engineer and was working on building oil rigs back in the '80s. We moved all over the world (Scotland, England, Belgium, Brazil) and I was born in the great city of Rio. I was one when we moved back though. so I can't dance, or play football. at all. I was a bit of a no-one in school. Wasn't bullied, wasn't the bully. Wasn't really popular, but had friends. I spent most of my time in the music room or hiding out in the lighting galley with a couple of other music/tech nerd friends. I come from a musical family. My dad is actually called Brian Adams and my uncle is called Phil Collins - so I had no choice. I was about 11 when I started to take the guitar a little more seriously. Then I discovered Metallica. and have been addicted to music ever since!"

Despite growing up in a Christian household and attending church every week, spiritual reality didn't get hold of the would-be rock giant until he was 14. He remembered, "I was at a conference (Easter People) in Bournemouth in 1997. A very early line up of Yfriday were the worship band. I just remember hearing the talk that night - about God's love - and how it made sense. It was the first time it appeared both logical and spiritual. I guess I decided to 'give God a go.'"

From 2002 to 2010 the rap/dance evangelists thebandwithnoname, formed by Mark Pennells' and Zarc Porter's Manchester-based Innervation Trust, had become one of the most popular acts in UK Christian music history. Their groundbreaking albums 'The Blitz' (2002), 'Schizophrenix' (2003) and 'Dying To Be There' (2007) were enthusiastically received. As well as thebandwithnoname, Innervation also had worship leader Andy Smith under its wing. James, who was working as a mortgage broker in Manchester, began gigging with Andy.

Explained James, "We were doing a lot of stuff for Hope '08, Spring Harvest, New Wine and The Message Trust, etc. That was a lot of fun! Andy taught me a lot. It was a break away (musically speaking) for me too - I'd either been playing indie music or heavy rock. The worship style needed something different. I still got to wail every now and then, but it was a nice change to my normal stuff. I got the gig with thebandwithnoname by chance. Andy was due to play some guitar for them but had double booked himself I think. He asked me to step in and I met the team then. I guess it went from there. I met up with Mark Pennells a couple of times and he asked me to play guitar for thebandwithnoname's new live show. I said yes! One of the best decisions I've made in life yet!"

Although Jimmy (as he was known as then) did many, many gigs with thebandwithnoname, he never got to record with Chip Kendall and co. But despite rumours to the contrary, Jimmy never mimed with the band though there was an element of subterfuge in his tbwnn gigs. He said, "I admit my amp stack was fake. We built some empty boxes to the same spec as a Marshall Rig. It looked cool. But in reality, I had a much smaller Fender Hot Rodd Deluxe behind it. That was always on, turned up loud and coming through the front of house. I always played live." 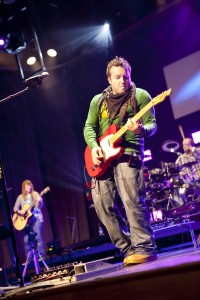 The guitarist has the fondest memories of his time with thebandwithnoname. The group's visit to Norway was a particular high spot. "I'm still friends with some of the guys we met out there. Such a beautiful country and the Seaside Festival was epic. I think just seeing some of the kids respond to our music in the way they did will always make me smile though. It was a blessing and an honour to go on that journey."

When asked about his reasons for relocating to the USA, he explained, "I've been leading worship in churches since I was 18 and it was a growing desire to learn more and do more. My church in the UK was connected with the church I'm at here in the US. I spent quite a few months talking all things worship with the worship pastor here, Chris Mitchell. Eventually he invited me out to visit and spend a few months seeing how they did it. In that time there just seemed to be some synergy about vision and heart - so they asked me to stay. I've been on staff as a worship leader for four years now."

James continued, "My wife Emily and I call Columbia, Missouri home now. It's a great town. Not too big, not too small. It's a university town too - so lots of life. We've been living here since 2010 and our first child was born here. She's called Esme Lilian and she's brilliant. Totally hilarious and painfully cute. I'm the president of the local rugby club - The Outlaws - and I enjoy watching and following The Sale Sharks when I can. Emily has started her own theatre company which is doing really well. She's an actress and used to tour with Riding Lights and Lacey Theatre Company. And our church, we think, is amazing. It's a large (around 2000 weekly attendees) Baptist Church and the size took some getting used to. But, we've found community here. It matches well with a lot of what we want to do in ministry - a strong emphasis towards reaching the unchurched and a high regard for emotional health and leadership. But for us, it was a respect for the leaders that made us feel like this is where we want to serve. The pastors here are brave enough to be vulnerable, but have integrity, strength and a ton of vision. They're men and women that we feel God has called us to serve and learn from. Also - they let me play my guitar pretty loud and we use lights and smoke machines. Which is fun."

James spoke about what led up to his recording 'Waiting Here'. "As a musician I've always written songs. And I always write worship songs. You write what you know. But for years I've played and recorded other people's music and never really had the guts to put my own stuff out there. The creative process is scary, and as much as we all like to say or think 'it's all for God' the reality is that letting other people hear it is scary! But, I've always wanted to do a record. I guess the time was just right last year, so we made it. I'm still writing now and I probably always will. I have a ton of songs. I think God put music on my heart as a way to connect with me. So I guess you could say God put it on my heart to do a record when I was 14."

The six-song 'Waiting Here' has been very well received. The Louder Than The Music website called it "a wonderful EP." It is now available for free download from jamesadamsmusic.com. The recording sessions for the EP left James with some vivid memories. "The first thing that sticks in my mind is hearing the drummer, John, the bass player, Rick, and the other guitarist and producer, Wes, play the music in the studio. Hearing those guys put their own style and passion into it whilst at the same time caring enough about my art to try and re-create what I wanted was awesome. I was humbled by it. The second thing was doing the vocals. I hate the sound of my own voice. It was torture for me."

One thing this gifted musician has been learning is patience. He admitted, "I'm always thinking about the next thing. I'm really learning to be in the moment, especially since having a baby. I don't want to miss what's going on here and now. The title track 'Waiting Here' is actually an old song - about 10 years old. But I started singing it again as it just started to apply more to my life lately."