The Christian music scene in Europe is plagued by a strange nationalism, which supports American music but shows no interest in music made in any other country except its own. This must change writes Jan Willem Vink. 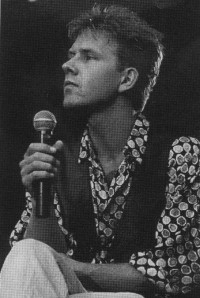 The increasing unification of Europe is an inspiration to both doomsday prophets and smart businessmen. Unfortunately the world of European Christian music hasn't developed much of a European philosophy when it sets its mind on thinking about future growth and expansion. Throughout Europe the Christian music scene is plagued by narrow minded and nationalistic attitudes which, unless challenged, will I believe prevent European CCM from being the relevant and successful tool it can be in reaching a post-Christian continent for Christ.

I have very mixed feelings about writing this article, for I have very mixed feelings about European CCM. As a journalist living in Belgium and writing for Dutch and British magazines, I have a tendency to write more about American artists than indigenous European artists. In doing this, I have contributed to the general attitude of helping create a wide gap between American and European CCM. Fortunately, in the past few years, a few things have started a change of mind.

In the first place I continually struggle with the question of the cultural relevance of parts of the American CCM scene in a European context. Of course there are a number of American artists with the gift and the mandate to speak fathoms to ALL cultures including Europe. Yet everyone knows that cities like Amsterdam, Rotterdam, London, Manchester, Glasgow, etc, etc are creative centres. These centres are coming up with particular styles of music that dominate today's pop charts.

If this music is a product of European culture, we can hardly expect the American Christian music culture to come up with a decent alternative. If we want to impact the European dance addicted teenager or the fan of Scottish roots music we have an urgent need for Christian artists from within those cultural centres to perform in these particular styles. It's happened with Manchester's World Wide Message Tribe or Glasgow's The Electrics. But examples are still sadly rare.

When I examine the best selling Christian music albums in the UK or the albums that the UK Christian Booksellers nominated as 'album of the year' (Stoneleigh, Noel Richards, Roy Castle, etc) I am forced to the conclusion that the whole of the British church is middle aged! Now Graham Kendrick is a powerful and anointed worship songwriter. But not only is his huge British following almost exclusively late 20s to late 40s, his music, having fossilised from an age of 60s folk strummers, now seems musically irrelevant to the millions buying 2 Unlimited or Nirvana or Oasis.

But let me return to the main thrust of this article, the individual European countries' CCM scenes and their strange blind spot in supporting some local CCM and being enthusiastic consumers of American CCM (that which makes cultural sense in Europe) whilst being almost entirely ignorant of the best of other European countries' CCM. When I did a seminar at Cross Rhythms '94 I asked the gathering present whether anyone could name the most popular Dutch or German Christian artists. No one was able to do so.

So many artists have a huge following in their own country but are totally unknown in neighbouring European countries. A lot of half decent American albums get better distribution throughout Europe than some of Europe's finest Christian artists. A European mindset by the Christian record companies is desperately needed. Only then will a Ralph Van Manen or a Twice get released in the UK and a Nuffsed or a Late Late Service get distribution in Germany. There needs to be a change of heart by record companies, promotors and media to help artists establish a multi-nation European base for their ministry.

If we analyse where we are today, we can see that there has been a tremendous growth in Christian music over the past few years. In most countries there is a distribution system, and it has become increasingly easy to get hold of quality contemporary Christian music. We Christian music supporters need to encourage the record companies by buying the few European albums that are released. For their part, let's see the record companies bringing over a Ralph Van Manen to the UK or a Nuffsed to Holland. Festivals need to become far more European conscious. Let's see singers, songwriters and musicians with the backing of a unified European support system, including promotors, record companies and publishing companies sharing what resources we have. I believe this would, without a doubt, dramatically expand the ministry of many European artists lifting them out of their current penny-pinching poverty and possibly even heralding in the revival that the committed musicianaries and prophet musicians are working towards.