Jared Anderson: Worship Out Of Desperation, Art Out Of Contemplation

Tony Cummings reports on American singer/songwriter JARED ANDERSON who spoke about his ministry and music. 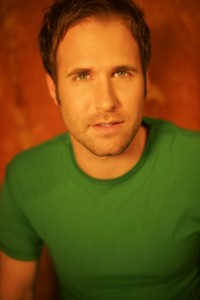 The track "I'm Coming Your Way" by Jared Anderson is getting a lot of Cross Rhythms radio airplay at the moment, and deserves every spin. It's hauntingly wistful air is a bit like a cross between Rufus Wainwright and Ben Folds and has already got Jared noticed Stateside. The singer/songwriter himself admits it's the best cut on his record label solo album debut 'Where To Begin'. He told Christianity Today magazine, "'I'm Coming Your Way' is hands-down the best song on the record. I wrote it in 20 minutes while driving in Nashville. It begins so harmless and smacks you across the face with resolve by the end. I just don't get sick of it."

Jared made a commitment to Christ at age four and by nine he was attending New Life Church in Colorado Springs, a fellowship which is today one of America's famed mega churches. Said Jared, "Songwriting was a hobby in high school and college. My fascination was to see how many [writing] rules I could break and how to deliver the unexpected. I used to try the songs out on my friends. In college, a couple friends urged me to play on campus, and I enjoyed the experience. With more than enough material, I figured I could make a CD. My first project cost $1,500, simply called 'You, The Piano And Me'. The second was better, adding drums, bass, strings and horns for a whopping $6,000, which I borrowed from my folks. That was the beginning of a dream."

It was the launch of New Life Church's Desperation youth culture event which catapulted the singer/songwriter to national attention. Albums by The Desperation Band featuring Anderson's songs and vocals gained national exposure. In fact, 'Where To Begin' includes radically different interpretations of "worship hits" "Rescue", "Amazed" and "Revolve". In 2005 Anderson was signed to Integrity as a solo. Said Don Moen, famed worship leader and president of Integrity Music Label Group, "While many who know Desperation band already know and love Jared, I think he's going to be a real discovery as they hear him paint a new picture of himself as a solo artist. His music is so accessible and his talent so large, that he is sure to capture the hearts of many new fans."

For the record label solo debut, Jared was put with platinum-selling record producer Pete Kipley (MercyMe, The Afters) who artfully blended rock, pop, acoustic and even jazz elements into a sinuously organic sound. One thing that happened to Jared was the realisation that not every song he penned had to be suitable for congregational worship. He said, "Realising that not every song has to be a congregational anthem kinda takes the pressure off. I'm hesitant to encourage people to try too hard to write worship songs. Putting words in other people's mouths is not something to be done flippantly. First I write what I feel I must communicate. Then I go to my friends and say, 'Hey, does this strike you as a worship song?' I would have been satisfied making a record with all worship songs, but Pete Kipley would not let me settle. He pushed me to dig deeper and focus more on the art, not just the function of the art. He would say, 'Let's make the kind of record we would want to listen to.' So that became the goal instead of just trying to resource the Church with songs. I'm glad he pushed me. I listen to the record and feel like the spouse in a marriage who totally got the better end of the deal. It's more than I deserve."

Jared is also enjoying the songwriting process like never before. "Writing a song is like taking a journey - some are long, some are short, but I always love leaving on one. My wife will look at me and ask, 'What song are you writing?' She can see it in my face that I'm somewhere else. Whether the result is that great or not doesn't concern me too much. I just enjoy the writing."