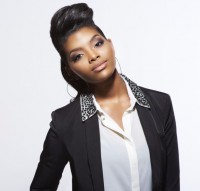 It was as a finalist in season eight of American Idol that Jasmine Murray first registered with music lovers though it was her beauty that first placed her in the top 10 Miss America pageant. Now, at the age of 25, Jasmine is all set to land a major hit with her debut album 'Fearless'. Prior to the album's release the singer/songwriter said, "I feel like I'm on a journey and it's a privilege to be able to share that with people. I know this is my purpose. I'm where I'm supposed to be. I want to reach people with the message God's given me."

Jasmine's invigorating pop R&B is now wowing a large swathe of listeners, though she admits that originally she had ambitions to break through into the mainstream showbiz. She told Cross Rhythms, "Being on American Idol, originally when I first auditioned - I've always loved so many different genres of music and I grew up in a Christian household but I also have always appreciated other artists and other genres. Originally I did want to go into pop music. I felt that was what I wanted to do for a while so I pursued that a little bit after American Idol. Then I started getting involved in the worship team at my church in my hometown in Mississippi and this light went off in my head and I felt the Holy Spirit. I was up there being a part of the worship team one Sunday and singing and I just felt as clear as day the Lord spoke to me and said 'This is where I want you; this is what I want you to do. I want you to sing for me and I want you to glorify me.' And I just said 'Okay, God. Absolutely. This is amazing; I feel your presence right now and this is the most incredible thing I have ever experienced so why would I want to do anything else?' There's no other way I would be able to get this feeling so why would I turn to something else? So that's just what I felt the Lord called me to do for my purpose and for the journey he's taking me on. I'm grateful for that because I feel like his plan is always ultimately better than ours and when we are just obedient and when we just consult him and walk with him and trust him he's always got a better route figured out and so I'm very grateful that this is what he's called me to do and that he's opened up the doors for me to do so."

In 2016 Murray moved from Mississippi to Nashville and signed to one of Christian music's most established labels, Fair Trade Services. At the end of 2016, she recorded a song she co-wrote with Jeff Pardo and Tony Wood, "Fearless". It was an inspiring reminder that we can all overcome fear and anxiety. Jasmine said at the time of the single's release, "There are so many people who struggle with fear, anxiety, doubt and worry. Maybe you're the 10 year-old girl who's afraid to say her speech in front of her class. Or maybe you're a woman who feels like she's not good enough at work or not good enough as a mom. People tend to think they're alone in their struggles because no one else seems to be talking about it. But that's so not true! It's just so tough to know what people are really struggling with or going through because our tendency is to look like we have it all together. We cannot overcome fear on our own. If we try - like I have - we're going to fail. When we believe in him, he promises us courage and strength. . . and he'll empower us to know that through Christ we are conquerors, we can overcome anything, and that we are called to be bold and fearless in every way!"

The "Fearless" single climbed high into the iTunes Christian Top 10, then in October last year Jasmine released an EP and then went out on tour with Mandisa, Danny Gokey and Love & The Outcome. She recounted, "After the tour, I released the Christmas single and I another single earlier this year. And now we are ready for the album. I feel like we have been very strategic with this journey and wanted to see, in the beginning, how a single would do then see how the EP would do then follow it up with a couple more singles and then the album. So everything is still on track; it's been great." 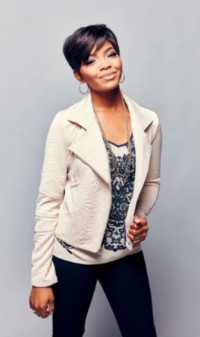 When Jasmine was signed, she told Fair Trade Services that she wanted to be involved in the songwriting process, and with the label putting her with Nashville's finest, that's just what has happened. She said, "I really wanted to be able to pour my heart into these songs. They were so great about teaming me up with different producers and other writers and just being able to all get into a room together and put our ideas together and birth these amazing songs. It's been a really neat journey and seeing the growth and seeing these songs come alive has been such a treat. It's really encouraged my spirit too because as I walked into a session I felt like the Lord would either put something on my heart that he wanted me to pour into the song or somebody else in the room would come up with an idea and a lot of us really connected with it and related to it so it was really cool to be a part of that process."

Jasmine spoke about some of those involved in the 'Fearless' album. "Colby Wedgeworth is an amazing producer; he actually produced quite a few of the songs on the album. Jeff Pardo, he produced 'Fearless' and 'Who You Love.' I co-wrote with Tony Wood, Ethan Hulse, Chuck Butler and Ted T. So many amazing producers and songwriters have been a part of this process. Ross King, we got to write together quite a few times. So all of the songs you hear on the album are not all of the songs we wrote. We wrote quite a few and it was great, we had so much to choose from which was awesome. But it also made it really hard because I feel like when you are part of this process, you really fall in love with the songs and it's so hard to just pick a few. But I'm excited. I feel the Lord laid on our hearts which songs should be on the album and which songs would be good for the chapter that I'm in, in my life right now and, I guess, ultimately what he wanted to be heard right now."

One song that Jasmine is particularly excited about is "Control". She said, "I think it was actually the first song I wrote when I moved to Nashville and one of the first songs I was able to be a part of. So that was very nerve wracking but also really exciting for me just coming to Nashville and getting started. This song really talks about just releasing and surrendering to God because I think in life it's easy to try to be in control and try to take things into our own hands sometimes. And then we realise we are completely not in control of any of this. Life goes by and we have to just trust God. He is sovereign and he knows all things and so this song really speaks to that. It was in a time in my life when I was realizing that I have to do that and understanding the value of trusting him. I love that song and can't wait for it to be heard."

Another standout on the album is the song "No Other Love", which has been released as a single. Said Jasmine, "Every single person on this earth wants to be loved and I feel the Lord wants us to know what true love is. I think that having a relationship with him and getting to know him is where you truly understand what true love is, what unconditional love is. Once you realise that and once you begin to feel his presence and once you actually begin to take that step of faith and begin that relationship with him, he opens up so many doors. He opens up your eyes to almost like this new world, understanding who he is and what his plans are for you and what it's like to walk with him and do life with him.

"I would say to any young person out there who doesn't have a relationship with the Lord, take that first step. You have nothing to lose, you have everything to gain. At the end of the day, our goal is not to live here forever. Our goal is to live with him forever. When you have something to look forward to it's the best thing in the world. It doesn't end here. We get to spend eternity with him and that is the best thing we could ever look forward to. I would encourage every young person out there to understand that when you start that relationship with Jesus it's the best decision you will ever make in your life. That's when you'll begin to see your purpose and it's when you'll begin to understand what a real true loving relationship is like. And what it's like to have a father who will never leave you, and we're his children. He loves us and he wants us to know what that's like. I grew up in a single parent home. My Mom raised me and all of my siblings by herself. I realised I have a heavenly father, a father who's always going to be there for me. There are so many things I would tell people but having that true relationship is so unlike anything else and it will be the best decision you ever made."

This so inspired me cause im coming out of that place of resting in fear.. Beautiful testimony and awesome encouraging words.. Im learning every day to trust Him cause i choose to.. I come to realize im Gods little girl and He keeps me safe and jouful.. Im that little girl
how still dont like standing in front of people. Im that woman who still struggles with insecurities. But God is turning things around and its becoming such a reality to me that im looking for Him more every day.. Thank you for your story..