Jason Carter: The acclaimed guitarist tells of his Uzbekistan travels

In April critically acclaimed guitarist and committed Christian JASON CARTER undertook a tour of Uzbekistan. He filed this report. 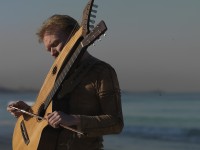 We were driving through the mountains on the way to my last concert in Ferghana, Uzbekistan. We had driven for seven days and covered 2000 kilometres on bad roads. The scenery was unique and stunning. There was a view towards Afghanistan to my right.

We came to a village to go for a pee somewhere. We asked where the nearest toilet was and an old man pointed towards a herd of goats, so we just peed near them. As we were getting into the car some children ran up to us and wanted to sell us all kinds of things, rhubarb, flowers, nuts, but one little boy had a handful of hats. They weren't the most beautiful hats in the world, but they were made with the bare hands of the people who lived in the villages in the mountains, and that gave them a different kind of beauty. And they could eat for a few more days on the little money that I gave them..

Uzbekistan was amazing. The history, music, people, scenery. I was giving a series of concerts there this year, in 6 cities, with the support of the British Council. I played every major city and I drove between places with my British Council guide/translator and a driver. The roads were bad and sometimes long, with roadblocks every few miles and tight security due to the recent bombings.

Immediately after landing in Tashkent, I was taken to the Meridian Hotel, to find the place full of American soldiers who were waiting to go home after a year or so in Afghanistan. There weren't allowed out of the hotel due to security risks. My first memory of Uzbekistan was sitting with American soldiers in the hotel bar, listening to a Russian 'country and western' band who were wearing cowboy hats.

On the first day we drove to Samarkand, an ancient city about 2 hours drive from Tashkent. At my first roadblock, the policeman thought I was the British Ambassador (after reading our official papers). I am not sure if that was a compliment or not, but I smiled politely and we got through in no time at all. But after he found out I was a guitarist, he had me autograph his arm. Samarkand was a great introduction to this wonderful country with its history and mellow pace of life.

I could tell you many stories about situations encountered at roadblocks, but this next story has to be the best. We were driving from Samarkand to Navoi, and there was a roadblock in the middle of nowhere, but this time it was the army and not the police. After a detailed search of our luggage and car, they asked me to open my guitar case and play something. It was the middle of the night in the middle of nowhere, so I walked into the office and played some Arabic inspired Flamenco tune. The Army officers were smiling and offering cigarettes. After I had finished playing, one of the soldiers in broken English told me that he had played classical guitar as a child. 'What kind of pieces did you play?' I asked. 'Mozart, Bach.and...Shakespeare,' he replied.

Bukhara was my favourite place by no comparison. It was magical, with Islamic history second only to Mecca, and ancient Mosques and market places. In Bukhara I played a solo concert in the local music school, which was broadcast live on national television. After I had played alone, and also with some local musicians, I decided to have a 'question time' with the audience. There were all kinds of questions from the students and public, but then a soldier stepped forward with machine gun in hand and asked, in a broken English accent, 'Hey, Englishman, what do English people think about the situation in Iraq right now?'. Remembering that I was live on television, I replied, 'Well, I think that the attitude of most English people is similar to most people in this room, but we can discuss it further after the concert if you like?'. 'Ok' he replied. I received a few more questions again, and then the soldier stood up again. 'Hey, Englishman, what is your dream?'. 'World Peace' I replied, in a light hearted, but serious manner. After the concert, we were packing the car to head on our long drive across the desert to Nukus, and the soldier approached me with two of his friends. 'Hey Englishman, I want to tell you something'. 'Ok' I replied, in anticipation. He went on. 'Englishman comes to Iraq with gun and brings war. Englishman comes to Uzbekistan with guitar and brings peace'. I was stunned by his attitude and I gave him a huge hug, and was touched deeply by his comments. I smiled all the way to Nukus.

After the concert in Nukus, I flew with my translator, back to Tashkent. We were both very tired from the mad schedule and were happy to be going 'home'. We boarded this tiny YAK 40 plane, put our luggage behind a net at the rear of the plane and sat down. I have flown on all kinds of planes in all parts of the world, but this was the best! One pilot, one stewardess and 2 engines. One of the same planes had crashed at Tashkent a month earlier, so I was confident that the chance of it happening again so soon was remote. We took off over the Nukus desert and I got a glimpse of the shrinking Aral Sea. I was so tired I almost fell asleep, but then I felt a draught of cold air hitting my neck and it seemed to be coming from the floor area. I bent down, and sure enough there was a hole in the floor of the plane! The hole was small, but I called the stewardess and she apologised and came back with a napkin and twisted it into the hole. The draught was no more.

Next time I will travel the whole country by train, I have heard it's a great experience.