Chris Tozer meets JASON CARTER, the man who has played his contemporary flamenco guitar across the globe - but not in Spain. 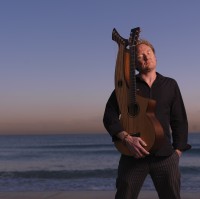 Word has it that Spanish guitarist Jason Carter went down a storm in the Arts Tent at last summer's Cross Rhythms festival. Over a couple of cokes in Victoria's Cafe Rouge I quickly learn that this "guitarist with Spanish soul" is determined to fuse his musical first love - flamenco - with all manner of musical styles under the label of Contemporary Spanish Guitar. Over the past 10 years Jason has amassed an impressive portfolio that includes a wide variety of concerts around the globe and seven albums that encompass the wide range of material that can be played on an acoustic guitar.

Recently, Jason has teamed up with Nick Beggs, the bass player who found fleeting fame at the top of the charts with Kajagoogoo and later played with Iona. "I met Nick at a wedding through singer/songwriter Dawn Cozma who sang on one of my albums," Carter explains. "Later we got together to play music and it's worked out really well. We formed a band called Ragatal with two friends - an Indian guy on tabla and a classical violinist." Carter of course plays guitar with Beggs on chapman stick. I suggest that such an esoteric ensemble must make some pretty intriguing music. By way of agreement he tells me of their recent gig at the Indian embassy. "It was a complete success. We went down a storm. Admittedly, our music is hard to describe," Carter adds. "It's a unique mixture of flamenco, pop and lots of other things, because we all come from completely different disciplines, but we mix it about and it works out really well."

Considering all that he has accomplished whilst still in his twenties, I was surprised that Jason was never taught formally to read music. Instead, he taught himself 10 years ago as a result of an embarrassing experience, as he explains. "I was playing in a heavy rock band in Cornwall when I was asked by a music director to play guitar in a musical called Blondel at the Palace Theatre in Plymouth. Naturally, I jumped at the chance but when I turned up at the first rehearsal I was given a huge score to music. Everyone else could sight read so I went away feeling extremely silly and determined to teach myself to a degree to which I am happy with."

Another key event around that time sparked off his passion for the Spanish guitar. "One day on the radio I heard a track from an album by Al DiMeola which really blew me away," explains Jason. "I thought to myself, 'This is what I've got to do - this is my destiny.'" He laughs. Jason went out and bought DiMeola's album and learnt how to play it "inside 8ut - I can still play it note for note now."

Throughout the past decade Jason has worked hard to develop his guitar technique and was eager to perform wherever he could. Oddly enough, he nearly turned down an invitation to play at the prestigious Royal Academy Of Music in London. Some Christian friends in a string quartet had to cancel a lunchtime concert at short notice and they asked Jason to stand in for them. "My first reaction was to say no, because I'm self taught and there's all these guys doing music degrees. But then I thought, 'Why not? I'll go and do my own thing and see what happens.' I was nervous but I played all the right notes and it went really well."

He certainly struck a chord with the Academy's Head Of Guitar, Michael Lewis who was impressed enough to invite Carter to attend master classes with two guitar greats -Paco Pena and John Williams. "I learnt a lot about those guys as individuals and how they operate," remembers Jason. "I was also impressed with the way that they were creative with their music."

Another musician to influence Jason was the violin virtuoso Nigel Kennedy with whom he had the opportunity to play last summer. "He's a fantastic guy who likes to have fun and he brings that element to classical music," says Jason. Apparently Kennedy's rebel persona comes from being forced to play the violin at a very early age.

Although flamenco music remains very much his chief musical passion, Jason is keen to play almost any kind of music just as long as he can add a Spanish touch to the original score. His latest three albums are a case in point, as Jason explains, "EMI in America sent me a tape of popular worship songs like 'More Love, More Power' and 'El Shaddai' and I simply played them in a flamenco style - hence the title 'Simply Worship'. I really enjoyed doing that album because the songs are so beautiful."

As a complete contrast Carter recorded an album with a classical string quartet, featuring the work of Luigi Boccherini who lived in Spain in the 17th century. The composer's work had been recorded before but Carter considered the results rather "safe", whereas his version was rather more "funky" because he had embellished the original score by removing some parts and adding others. He explained that it was done in true Baroque tradition. "Baroque music allows for improvisation, unlike much of classical music, hence a composer like Brahms would encourage a musician to ad lib."

Jason then singled out another recent ARC music release for particular attention. "As far as I'm concerned 'Kindred Spirits' is the best album I've done. I really like it a lot," Jason enthuses. "When I recorded it, I had been playing gigs for weeks and weeks, so I was really on form. When you play flamenco guitar your technique requires regular practise and all those gigs helped me to produce a really good recording." Apart from a selection of standards, he composed all the instrumental pieces himself.

In the past, Jason has been active as a church worship leader but has left, feeling totally drained. He's starting to worship more regularly now but feels that it is prudent to keep his musical gifts hidden for the time being.

Jason has also got more involved with local members of the Arts Centre Group in London, as he explains, "I found it difficult, years ago, because it seemed that the Group was concentrating on the needs of more established artists. At that time I had only made one album and I was really struggling and I felt that the ACG wasn't providing fellowship for the people who were just starting out. Maybe it's just me. Anyway, I've been back quite recently and I sense that things have changed for the better."

Jason is concerned that too much of Christian music is out of touch with the real world. "It hasn't got that element of reality," he explains. "If I was angry or in pain I would want to express that in my music and not pretend that everything is alright. I do find that the Christian music scene is too separate from everything else, and that's wrong. I would advise young Christians to take their music to the pubs if they want to develop as musicians."

He still feels that too many in the Church find it hard to accept that artists and musicians have "proper" jobs and recalls a friend from a Brethren assembly who was told by her elders to work in a bank even though she was a talented artist. Eventually, she did take up art but because of that initial lack of support she hasn't got the confidence that she should have. "It's very sad when someone with so much God-given talent can nearly see it going to waste," Jason concludes.

Jason Carter resolutely follows in the footsteps of Christian thinkers such as Hans Rookmaaker who claimed that "Art needs no justification". As if to underline his support for a Christian philosophy of the Arts, the guitarist has included quotations from learned friends on the inserts accompanying his recent CDs. One echoes Francis Schaeffer when he described artists as the prophets of their generation.

Paradoxically, Jason appears, as yet, to be a prophet without honour in the land where his music was born. The odd favourable Spanish review has not been enough to tempt him to even visit the country - let alone play there. Some might consider his fiery mixture of flamenco, jazz and popular music as unpalatable in a culture that has been soaked in flamenco for 500 years. I, for one, would suggest that the future is bright for this musical pioneer, wherever he plays.

I only hope that Jason gets to appear at other festivals - not just as a musician but also, dare I say it, as a prophet who can stir Christian musical wannabes to get in tune with the real world around them.