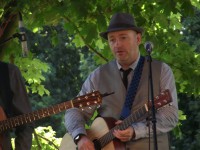 Even his autobiography Short Accounts Of The Imperfect Christian only documents some of the events in the high adventure life of singer, songwriter, author and church minister Jason de-Vaux. But as there is no sign Long Accounts will be published anytime soon, there is clearly a need to fill in some more of the gaps in the life story of this tireless worker for the Kingdom. In the last year alone Jason has recorded and released three singles, a children's album and an electro pop album; published a book chronicling a battle against serious health problems; taken over the pastorship of a Baptist church in Birmingham; and entered into fatherhood with the birth of his first son. So, at a small festival in Cambridgeshire, I talked at length to this human dynamo renaissance man.

Jason was born in Clacton-on-Sea, Essex, in 1968. As a teenager he was something of a bad lad. He admitted, "During my late school years, until I was 19, I ran with a gang. I used to be involved with drugs and quite a lot of violence. A week before my 19th birthday, the Lord touched my heart and I was saved. What happened was that I saved a guy from a beating who turned out to be a Christian who then invited me to breakfast. Him knowing that I was a felon; I didn't know who he was. He challenged me with the words, 'The rumour is you're not scared of anything' - to which I said, 'Nah, I'm not'. In front of all these people in this coffee shop he said, 'Great! I'll see you at church on Sunday.' I went to church and I got saved, which was amazing."

From the day of his conversion life was very different for the young de-Vaux. He explained, "I woke up the next morning, I didn't want to take any drugs, I didn't want to hang out with my so-called friends anymore. I was a new creation, and I started a whole new path. I gave myself up at the police station, went through everything I'd done. The police came back to me a few days later and said, 'Only one person wants to press charges. It's such a small thing, we'd only give you a slap on the wrist.' But I made myself available. This went on for a little while until I realised I was free. Before I was saved I used to steal cars for a living. I had to do something with my life quite radical and I went into social work. I started very slowly, in residential care. I've always done music, good or bad; I come from a musical past. So I went to youth groups - schools and things - played the guitar and shared my testimony."

The first instrument Jason played was the guitar but in the '80s British youth were turning to the music of the New Romantic bands like Human League and Depeche Mode and Jason picked up the rudiments of keyboards and taught himself how to programme synths. After awhile Jason was writing his own songs. Then, in 1987, the singer/songwriter unexpectedly landed a deal with a small record company in York called Ebony Records. Explained Jason, "They quickly realised I was a Christian and as much as I had a couple of underground hits - one called 'Dancing In The Shadows' - the record company said, 'We want you to do a specific kind of music and we'll get rid of the lyrics you're writing'. Word offered me a publishing contract and both things didn't feel comfortable. I wasn't my own person anymore: I was encouraged by my youth pastor at the time to seek the Lord. I ended up going to London City Mission and training to be an evangelist."

The evangelistic methodology of London City Mission was particularly street level. One of their key strategies was to do bits of street theatre or paint boards on an easel where a quickly drawn set of images would eventually develop into an evangelistic message. Jason ruefully remembered his time with LCM: "I learned to paint on boards. Also, I spent a lot of time in Covent Garden, either cleaning out the showers in the hostel or feeding homeless guys, bless them. It was a shock to me: as much as I'd been on the other side of the pathway, I had my own living. I also got to hone my tread a little bit doing street theatre, sketch board, singing live in the street."

Jason continued his story: "After being with City Mission for a year, I felt a calling in my heart to apply for Bible college. I applied to Moorlands, as it was, in Dorset, and got turned down the first time. It was a testing. They said, 'What will you do if we turn you down?' I said, 'I'll apply again next year'. Funnily enough, they turned me down. I applied again the following year and went to Bible college, underpinned myself with theology - all the clever things ministers, evangelists seem to need, walking this path. It deepened my faith and stretched me an awful lot."

On completing his course Jason became a youth pastor in a big UPA (under-privileged area) in Dorset. For a few years Jason worked on a huge housing estate near Bournemouth. He said, "I started leading worship. I was preaching one Sunday, then the following Sunday I'd lead the worship. At that point I had stripped my music right back to a guitar. Sometimes there'd be a band - a bassist, a keyboardist, the usual set-up. Sometimes I wrote my own worship songs and mixed them up with Graham Kendrick, Matt Redman. I was still going to church, but I went through a number of changes in my life. I owned a phone shop for a while - long story."

Running a phone shop was far from easy. "It was a business venture - the idea was to put the profits into one of the churches that I was pastoring that didn't have funding. It did what it said on the tin. Then the church moved on, and I was in limbo for a while - round about '98, 2000. I got tired - you do when you're giving all the time. I'm not saying no one was supporting me, but when you're working independently as a free church, you just haven't got the infrastructure to support you. I felt myself slipping."

Jason escaped from this difficult period in his life in part through music. With a Christian band All For Sunday Jason recorded an album 'Thoughts For Feelings'.He recalled, " I bumped into a guy whose parents owned a bakers next door to the phone shop, and he was really into music. I became good friends with him. He said, 'I've got a recording studio in my house; I like what you do: why don't you come and record an album?' He didn't even charge me. I spent two weeks in this guy's house, every day, doing wild stuff with a guitar - stuff that I hadn't been able to do before in a studio. It was a singer/songwriter project. I was just messing about with different sounds."

Jason's music developed iinto synth-driven pop, some of which with the decidedly club music rhythm. He remembered, "I brought out three singles in the late '80s - 'Life Plus One Equals Three', 'Loving In Degrees' and 'Dancing In The Shadows'. That stuff all underpinned me. I was involved in a local nightclub scene - a very big nightclub at the time in Bournemouth called Berlin's doing a bit of deejaying and some live stuff. I got to peddle my music through that. But club culture was having a detrimental effect: I felt my faith slipping because I was involved with things of the world again."

To get his life back on track Jason moved to a Christian community The Pilsdon in West Malling, Kent. "I stayed there for about 13 months and basically just helped other people. You met people at their needs, and myself at my own needs as well: it was therapeutic for me too. I'd be gardening with people - I used to hate gardening, but I quite like it now - I could be painting walls, I built a shed for them, I helped raise a barn. It centred me again. I was writing songs in my spare time. As it was, there were two South Koreans at the community and they convinced me it'd be a great idea for me to go and live in Korea, to teach in a new school and help build a church with this school. 13 months of being in the community - next thing I know, I was flying out to South Korea. I was teaching English: folks out there want to learn English."

Almost as soon as he arrived in Seoul Jason visited the famed mega-church run by Paul Yonggi Cho. His experience there was a little disconcerting. "I got jumped on by a steward because they wanted me, as a white westerner, to be on their card so they could get double points. At the end of every year, the top steward gets a car; so I felt like I was in a Hyundai advert."

Thankfully, the church just outside of Seoul that Jason was helping build had none of the mega-church excesses and was "very, very good." Said Jason, "It was while I was there that the pastor and his wife approached me and said, 'You've got a British passport and you're not American. We've got two German missionaries who go into North Korea about once every six weeks with permission. We'd like you to go with them, because they need a nurse.' I said, 'I'm not a nurse'. They said, 'But your paperwork can say that you're a nurse'. They wanted me to help smuggle Biblical material into North Korea. I came back to England for two weeks, furlough - back to the community and prayed it over. I thought, 'This is going to be a bit wild'. I went back to South Korea, and they moved me to Daegu - another city in Korea. I taught for six weeks in a church and school, then for one week in six I went into North Korea as a nurse, which I'm not. There was a scarlet fever epidemic going on at the time."

Jason continued, "We took in Christian literature with the underground church, which comprised of one or two brothers or sisters in the Lord who were trusted. They'd take the Bible out to the believers, and it would be distributed across the whole of the underground church. They'd literally learn it off by heart - the bit they were given - and then eat it. After about a year, coming back on what would be our last mission, we got arrested for working for the CIA. I spent 11 days in a North Korean prison with my two German friends. Amazingly - we didn't know at the time - there was a missile released by the North Koreans that narrowly missed Japan. There was an international outcry. The leader at the time, Kim Jong-il, liked his whiskey; part of the deal to lift the embargo on goods going into North Korea was that all non-Korean political prisoners were released. So I only did 11 days; but I came out with a urine infection, a kidney infection and malaria. The South Koreans arrested me for working for the North Koreans - with my two German friends. We were immediately thrown out of South Korea and we ended up in Hong Kong, where I spent two weeks in hospital; and then I came back to England. My two German friends were off to Africa, but they said it was right for me to come back to England and start doing worship again."