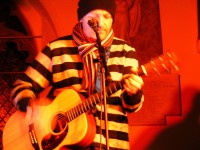 In 2007 Jason started working for the Methodist churches: those two missionaries were Methodist. They wanted a specialist in this country to do a work they didn't feel they could do, which included worship, but I also did alcohol, drugs and domestic abuse counselling. I got involved in worship, moved to Cambridge. There was a wonderful recording studio in Cambridge called Hub Sound Studios and I did a charity single there with three other guys under the wacky name of Four Men And A Sofa. ".The "three other guys" were Cambridge-based ministers Joey Rozek, Peter Prescott and Andy Henman and their "Amazing Grace: single was to raise funds for specialist hospital baby units in Glasgow, Bournemouth, Cardiff and Cambridge. The initiative grew out of a desire "to take the chrch otsise of its walls and into the community." At the time of the single's release in March 2011 Jason explained to the BBC, "we st up a portable lounge with sofas and a coffee table in a shopping centre and invite people to have a chat over a hot drink. Most have asked us to pray for them or a given life situation that they, or a loved one, find themselves in."

In August 2010 Jason self-published an account of his colourful adventures in Korea, Short Accounts Of The Imperfect Christian under the seriously unwieldy moniker of Jason K de-Vaux Balbimie. But music making continued to take up quite a bit of his time. He remembered, "I wrote one song while I was sitting in a cell in Korea. I too that and other songs I'd written into the studio about three weeks after doing this charity single. So we recorded an album called 'DNA', which means 'daytime, night time, anytime', worshipping God'. Some songs worship, some were commercial. I had synthesizers in it - guitar, vocal, everything else."

The Korean prison cell-origin song was the worshipful "People Of The King". Singing on the track was Pauline Park, a 16 year old singer from South Korea. Jason, busy as ever, went on to do a mini-tour of Britain's Costa coffee houses. "There's a thing called Sunday Night Live. At one of them, Revelation TV came and videoed me playing live and did a massive interview with me for their international programme they did last year." In 2012 Jason released, via SoundCloud, a four song acoustic EP 'Walking The Wilderness Road'. "It was done to get away from programming and electronics, just me and Martin in a live recording session."

By this time Jason had planted a church in a suburb of Cambridge called Chesterton and had also been appointed the Chaplain for the City of Cambridge ("it meant I got to put on public services in shopping centres"), Jason was booked for an event called HOPE Cambridge, an ice rink ministry at Christmas. He remembered, "The ice rink agreed that we'd go on a Friday night and a have choir. Three hours, three different sections, we'd be ice-skating and have a choir singing carols. Beautiful scene - the mayor came to the first one. We had to put this choir together, and put out this APB across Cambridgeshire for people to come and sing. A young lady called El (which stands for Emma Louise) was one of those people. I thought, 'I like the look of her', and I wanted to get to know her better. So on the first night of the singing I stole her music. I broke all protocol by texting her and saying, 'I've got your music; how can I get it back to you?' But she wrote back, 24 hours later, 'It's okay. Someone else will give it back to me next week.' I found out later her reluctance to meet up was because she thought I was married! What had happened was the night I met her I had brought my whole church to do ice-skating. I got them all through the door because I was one of the guys managing the event and had introduced the people as 'my family'. There were a lot of children and El thought they were mine. Then she realised the following week that I didn't have any children and I wasn't married; so then we started dating."

Jason was working with a number of churches in Cambridge - Wesley Methodist Church, Chesterton Methodist Church, the Zion Baptist Church, King's Church - and the need for songs for very young children had become more and more apparent. So with El's help Jason began writing more children's music. By 2014 a batch of these songs had been recorded and released under the title 'When Children Pray' in what was effectively the first ever worship album targeted at two to four year olds. Read a Cross Rhythms review: "Having children singing on the CD but giving them no accompaniment and making no attempt to turn them into a cutesy choir ensures their ragged renditions of these nursery rhyme-style worship songs are charming rather than cheesy. Jason's touch is so sure he's even daring enough to take on an unsavoury subject few adult songsmiths would tackle ('Let's dig a hole/Let's dig a hole/Let's dig a hole/And put the Devil in')." Jason said, "A guy called Andy Henman, who works for YWAM and did the original Monkeys For Jesus project and Four Men And A Sofa ministries with me, does the most incredibly funny voices. So on a couple of the tracks he overlaid some funny voices that go along with the songs. We had to do several takes because we were both rolling around the floor."

Jason's second book The Waterworks: An Eye Watering Testimony For Men. The book chronicles an operation on a part of the male anatomy few men would ever talk about publicly. Explained Jason, "I had the operation, partly due to what happened to me in Korea - my kidneys and things. It was excruciating. When they told me what they were going to do, I nearly passed out. I thought, 'I've got to go through this', and I wrote a diary with it. It talks about how, as men, we don't talk about things. I realised I wasn't talking to anybody about this, and it's very hard to ask for prayer if you can't tell people in what area of your body you're not very well in. Because it's such a men's thing, I'm thinking, 'How many men actually sit down and discuss their prostate, or their kidneys, or their urethra?' I wrote it all down into a book, and it's a 40-page lunchtime read, for men to be encouraged to stand up as men and say, 'I've got an issue, I've got a problem: can we pray about this?'"

Jason's latest full album is 'Even The Stars Must Bow'. He describes it as "going back to my synth roots." The project contains two new versions of "Loving In Degrees" (a song Jason originally recorded and released as a single in 1987 under the band name His Word) as well as the club orientated opener "Obsessed". As well as pastoring a church in Birmingham, the extraordinarily busy de-Vaux is currently writing two new albums, the children's project 'Funky Monkeys For Jesus' and a contemporary album with the working title of 'No Dog Collar Required'. At his current rate of knots it will only be a year of two before Cross Rhythms needs to return to this hard working and talented renaissance man.