Jelz Music: The London-based rapper whose heart beats for the young

Tony Cummings quizzed the emcee with the "In My Head" turntable hit, JELZ MUSIC

London-based rapper Jelz Music has a heart very much focussed on ministry and over the last few years has impacted thousands of young people with the Gospel. Now he is emerging with a higher profile and his "In My Head ftg Christine Asamoah (Remix)" recently made number one on the Cross Rhythms Chart. To find out the history of Jelz Music - real name Jeremy Zulu - Cross Rhythms quizzed at length this motivated maker of rhymes.

Jeremy was born in Lusaka, Zambia in 1987, moving with his parents to London at the age of two. At first things went well for the family, living a luxurious lifestyle with what Jelz called "much partying and entertainment." But then things started to go pear-shaped. Jelz recounted, "My mum lost her job and my dad lost his scholarship funding. As things got worse all his friends disappeared and we were left to fend for ourselves. My dad found it very hard to give up the partying life particularly the drinking. It was left to my mum to provide for the family which now included my little sister. Eventually as this continued and my dad's behaviour got worse my dad was finally kicked out of the house but it was in this time that we started to go church and find Jesus. As Jesus began to fill our lives more and more we saw a miraculous turn around. But sadly for my dad things got worse and worse and he eventually died from alcohol abuse. I am to so grateful to have found Jesus as the Lord enabled me to forgive my dad and it was from that when I was 15 that my journey of faith truly began."

Jelz had actually become a Christian at age 11. He was attending a local church in Deptford, South London and while on a youth weekend away he gave his life to Jesus. Jelz admitted that at first his faith seemed "very boring" until one day listening to the song "Consuming Fire" by Tim Hughes things began to change. Music had always been an important factor in Jelz' life. He said, "I remember listening to Michael Jackson, UB40, Paul Simon, Tracey Chapman and Tina Turner. The first rap song I remember seeing and engaging with was MC Hammer's 'Can't Touch This'. After this was Coolio's 'Gangsters Paradise'. This was the first song I learned to rap to. Me and my cousin played it over and over reciting our parts.

At secondary school Jelz's rapping began to develop. He remembered, "By then a UK expression of rap known as grime had begun to take hold. It was very much centred upon two emcees going head-to-head to see who had the best barz (lyrics). I was never confident enough to join in however when I was at home I would always dream of being able to. So I began to write my own lyrics, based upon what I heard in the playground and listened to on radio and TV. At first my lyrics reflected the hip-hop genre of the time filled with negative content of violence, drugs, money, swearing and the degrading of women. I had never seen or done most of the things I wrote and rapped about. But then as transformation in my life took place I began to see that God wanted to use my giftings to reach the world and my lyrics switched to a positive focus, telling stories about my life and choosing to empower and uplift people through my music."

Jelz's first recording was a single, "I've Got Something To Say", released in November 2010 under the name Jelz. He said, "The single told my story about my relationship with my dad and how God showed up in it all. Then in January 2012 I released the 'Postive Barz, It's A Standard Ting' EP while I was at university studying music technology. It was my first real attempt to put out a body of work as an artist. The EP was recorded over a period of two to three years in a variety of locations from our church office basement to university halls. All the music was produced by one of my good friends Nick Quarud. We used his Macbook with Logic Pro. Nick is not necessarily a hip-hop producer but has an amazing ear for music and liked to incorporate live instruments in his production. Once the music was complete we sent it over to another friend called Daniel Moyler. The featured artists and I recorded our vocals in his front room and he then mixed and mastered the project. I had put on a fund-raising event to raise money to get the EP manufactured and also decided all proceeds would go to my football and mentoring project called Switch It! Football And Life." 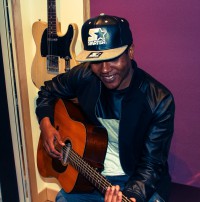 It was to be two years before the rapper made another recording and that was with a name change, Jelz Music. Jeremy explained the gradual development of his rap persona. "Jelz stands for Jesus Empowerz LiveZ. In school days my nickname was Jel. When I first started rapping I needed an artist name but thought Jel wasn't right. My second name is Zulu and so I thought let me put a z on the end. The acronym came later as I thought I wanted it to mean something more. I began to use Jelz Music as I started to work and collaborate with more people. I didn't want to take the glory for myself and so thought Jelz Music would fit better. It has been a struggle to know which to use at times. And now I tend to use Jelz more and Jelz Music is used more on the admin side of things. This decision was made with my manager and booking agent as we thought people needed to know who Jelz is and identify more with me as an artist."

It was while the rapper was in the second year of his university course that a new recording emerged. He explained, "Our main assignment that year was to create and release an EP. By the university criteria we needed to do all aspects of it and so the EP was completed by June 2013. However as much as it was great to have learnt the art of production, mixing, mastering etc I knew that my skills in these departments were still not up to standard. I therefore just released the EP to get my university grade and then sorted out an engineer to help take things to the standard I was looking for. This is when I began to work with Mantis at his home studio in East London. Also around this time I had connected back with an old school friend, Kieran Guy. He plays drums and I needed a new drummer as mine had moved away and then quite sadly passed away. What Kieran brought to the project took things even further than I imagined. He was also a producer and so pushed the tracks and my live performance to a much higher standard. Due to people's time constraints etc it took a year from then to complete the project but it was well worth the wait."

Titled 'Barz Speak Volumez' the EP was released in October 2014. Said Jelz, "Shortly after the EP's release I was also able to attract management from Paul Salmon of CrazyFish Music who is a Christian manager that works more in the secular music industry."

The Cross Rhythms playlist hit "In My Head" features the voice of Christine Asamoah, who attends Jelz's church, CLF Lambeth. He said, "She has an amazing voice. I wrote 'In My Head' whilst dealing with various situations in my life that were trying to stop me from progressing, both physically and spiritually. In line with the title of the EP 'Barz (words) Speak Volumez' inside I knew that I could not afford to listen to these distractions and that in my head is where the battle with the Enemy had to be won. As a man thinks so he is. This song was me taking a stand and telling others to take a stand and become who we were created to be."

Cross Rhythms asked Jelz who he felt was his main audience. "My primary calling is to the world and wherever God takes me. There is no type of gig, platform I would turn down as long as I know God is calling me to be there. I know in music marketing terms that is not a great answer but from a faith perspective it is. Matthew 28 says, 'Go out into the world and make disciples of all nations, baptising them in the name of the Father, Son and Holy Spirit.' My heart beats for the young and particularly those that don't know Christ so I guess that is my ministry of preference however at the same time as a worship leader I love to be amongst believers and praising God's name. I like having the flexibility of gigging in different places as one week I can be in a school performing and giving a presentation, the next I'm in a bar. I feel blessed in the way I write songs because they can relate to anyone's situation."

Jelz continued, "I am in a time where I am writing new songs and hoping to make another official release towards the end of this year or very early next. I've been hitting the studio with Kieran regularly but don't know the title yet. Some song ideas at the moment are 'Break Free', 'Fake Dreams' and 'Believe Me'. A spiritual lesson I have learnt is trust God for we can do all things through Christ who strengthens us. To be in the position I am now as an artist is amazing. And it's only just the beginning."