Jeni Varnadeau: Come in Number 6... your time is up!

Cross Rhythms tracks down artists who've been quiet of late. This issue we speak to JENI VARNADEAU, the Nashville- based singer who had successful albums in 1996 with 'Colors Of Truth' and 1998 with 'No Hesitation'. But with the record company Pamplin going belly up Jeni seems to have been less in evidence. 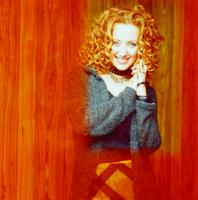 After your last album on Pamplin we lost radar contact. What have you been doing in the last few years?

A lot of the same stuff- touring in the US and in Europe, writing songs, and I put together a brand new album called 'Melange'. I wanted to put together some songs that I had been working on and that seemed a little more accessible to the European market. I also do a workshop for teenage girls called ChikChat. I launched ChikChat in January of 2000 and it's been growing ever since. It is a workshop where I speak on topics relevant to teenage girls dress, make- up, skin care, nutrition and exercise, how to study your Bible and pray, dating, sexual purity and self- esteem. Last year I wrote a Bible study curriculum that covers those same topics more in depth and gives girls a guide to dig into God's Word and learn what he has to say about all these issues. I hope to release the study at the end of this year.

Why is ChikChat so important to you?

ChikChat is important to me because God's Word is so valuable and precious to me, that I want teens to see how valuable it is to them (and all of us) as well. My walk with God grew in leaps and bounds in junior high and early high school. This was an extremely formative time for me, as it is for most people. My hope is that I can encourage teens at that same stage of life - to have the same incredible experience with God and their walk of faith as I did. To encourage them that we can have a really full life living for Christ - when we discipline ourselves to spend time in his Word. When we do, it is so fulfilling and satisfying, it no longer feels like "discipline" - it's driven by a passionate love for a Saviour who loves you so much. When you realise the truth of his love for you and let it sink in, then you realise the value and worth you have as a person. Once you realise that, you choose to live for him and live more wisely. When teens can do that, they're less likely to make mistakes like becoming pregnant out of wedlock at 14 years old, or doing drugs, or giving in to peer pressure on any level. I just really want to see teens moving forward in joy and hope in their lives and not living in regret.

What kind of treatment have you had from the Nashville-based CCM industry?

JV Right now, I feel they are a lot more receptive to me, because the singer/ songwriter genre is growing so much and that's what I do. I have had to face a bit of opposition, though, because my former label was not well received by Nashville (it was based in Oregon), and it has affected how people view me because of the label I was on. It's been a big obstacle to overcome. I think that there are quite a few people here who have watched me continue to tour and write without a label and enough time has passed that they are now more receptive to me. I really appreciate those who are willing to give me a new chance.

What's the 'Melange' album all about?

I was ready for a new album and we were doing a recent fall tour in Europe. I knew we would be playing in a lot of the same venues we visited last year and I wanted to have something new for those people. Because I am in between record deals, I have had a lot of freedom to try some things musically - which led to a wide variety of songs and styles. I had also been commissioned by an independent film and the International Mission Board to write songs for them for specific projects. So putting all these songs together on one album seemed a little less crazy if it was appropriately titled - and I feel it is. It is a melange of songs - new and old, English and French. Somehow, because of the variety, it somehow makes sense as a cohesive piece. And the good thing is, is that all the songs don't sound the same!


What plans do you have for the future? Are you looking for another record deal?

Yes, I am. I am trying to work with several producers to find a good fit. I am talking with a few people at labels right now and I really hope that something comes from it. I love to do what I do, and definitely don't want to do it alone! So many artists do the independent thing and do it well. I prefer to have a team around me - making decisions together. I think I can better serve my audience by having some people around to advise me and help me focus. Two are better than one! I'm also working on a video/ TV/ Bible study project for teenage girls that I hope to get out by the end of the year. In the meantime I'll keep writing songs and keep performing them. It looks like I'm getting a new booking agent, which I'm very excited about. I will also be pursuing more acting opportunities down the road. This is an area I just love. As long as I can perform and communicate things I'm passionate about, I'll be doing just fine.