With a finely crafted album receiving the coveted 10 square review in Cross Rhythms, it seemed an appropriate time to have another chat with JENNY & ALEX LEGG. Andrew Long fired the questions. 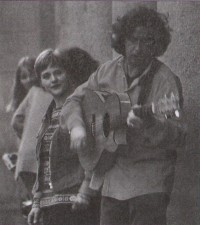 Long acknowledged as one of the most gifted acoustic-orientated duos in Christendom, London-based Jenny And Alex Legg have now turned in their finest album yet with 'True Stories' for ICC. I began by asking them whether they've done much gigging recently.

"Since 1997 we have played in Europe (Holland, Germany, Belgium) as well as extensively all over the UK. We played some gigs in Australia, Melbourne and Brisbane. We've had the privilege and pleasure of working in all kinds of situations with creative Christians trying out many ways and means of presenting the gospel to their communities. Alex has worked in many schools here in the UK with author and presenter Nick Pollard. In Australia he worked again in schools, with John Smith's Care And Communication Concern. A prison in Almelo, Holland. We played in an Irish theme bar at the Stadtfest in Owen, near Stuttgart, Germany. The Town Square in Bruges, Belgium. Festivals in Holland and Germany and Greenbelt here in the UK. We toured with Chris Eaton, performed one-nighters with Adrian Plass and Fiona Castle, a Premier Radio Roadshow in Legoland, Windsor. A pub outreach with Altrincham Baptist Church. Concerts and workshop seminars at various conferences at home and in Europe. As well as all that, Alex plays his solo gigs in pubs and clubs and with his band, The Wild Geese."

Andrew: Tell us about your latest album.
Jenny: "True Stories" was produced by the great Paul Field and featuring Chris Eaton on back-up vocals. We used a great team of musicians. The chemistry in the studio was wonderful, a lot of laughing, tears, goosebumps and limericks. It really was exciting to be allowed to make this record I understand. (Alex) "The album's pivotal song, "Walking With Stones In My Shoes", is always a difficult song to perform. Emotionally I have a lot of myself invested in the song. The vocal on the CD is the guide vocal. An emotionally charged performance. The song is for Katy, my daughter born 16 years ago. She died aged six weeks in a cot death. For me the song is about the living, organic, healing power of God in my own life. I was a disillusioned hedonist at the time of Katy's birth. Her death caused me to ask some real soul-searching questions about who I was, what I'd become. A lot of guilt lay among the grief. Her mother and I split up shortly afterwards. Boozing and doping took a toll on our relationship. We'd probably have split up earlier, had it not been for the baby. Katy has never been given a memorial. Her ashes were scattered on the flowerbeds in the crematorium and we all just got on with our lives. For me, that has never been enough. There's no grave for a headstone and a plaque couldn't say enough about the impact she made on my life. So there's been nothing that even acknowledges her life. This song is her memorial and with it, the feeling that I have made amends. I've thought about her every day, down the years. The guilt and unease that accompanied every thought I had about her has gone. Healed...and my walk goes on, telling the good news and dealing with the rest of my unresolved business! "Another song I think works well is 'Sailing Boat in Time'.
There's a great Jenny performance here! It's a song I wrote five years into recovery with the help of AA. The AA recovery programme insisted that I fearlessly and thoroughly look for God. To do so I first had to open my mind to the concept that there may be a power in my life, greater than myself! I rejected this out of hand at first. All my instincts rebelled at such a suggestion! I wanted sobriety so badly! The recovering alcoholics who displayed the peace of mind, maturity and wisdom that I wanted seemed to be those who spoke of a personal faith. This song is the start of the long process that led me to my faith.

Andrew: I understand 'Who Wants To Talk About Hope' came out of your involvement with seeker-friendly church services.
Jenny: "Yes, these services have a lot of dancing, singing and performance of sketches bringing this Gospel of hope to unchurched people. I enjoy and admire the reflection of God's creativity in the people who work so hard to build their church in a way that is relevant to the community around them. Done well, it's the Gospel in entertainment form, 21st century art. Like Michelangelo's creation or Handel's Messiah, for the TV generation. 'Who Wants To Talk About Hope' challenges the culture that just wants to watch, to get down among the dead and dying with this great message of love.

Andrew: You've always expressed a desire to be involved at the sharp end of Christian ministry, 'the Aids victims, the homeless and the drug addicts' was what you said in 1994. Is this still a growing concern for you and how do you work this out practically in your work?
Jenny: "I think that this message of the Gospel is a I message of hope that I strive to articulate lyrically and musically in terms that are relevant to the outsider and the marginalized among | us."

Andrew: Any exciting projects lined up for the future?
Jenny: "Carberry Festival, Musselborough, Scotland and Greenbelt all on the same weekend. We're working on a tour for Germany. We've got gigs lined up for the rest of the year. Alex is working on developing the schools programme, Values For Life with Tony Cant, one of Care And Communication Concern's presenters who is coming to live in the UK this summer. Alex has been writing recently with Dave Bilbrough. The co-writing angle is one he hopes to develop! Maybe this year he'll find time to get out to Nashville to write with some chaps there.

Recently I came to discover 2 lovely christian albums, by Ales and Jenny. Unfortunately the biographies on internet leave out all christian references. Does anyone know if Alex has kept his christian faith at the end of his life?

Sorry for my english, I'm only speak portuguese. I have a tape songs of Jenny & Alex Legg, I have since i was a child. How can i search all the songs in Internet or Youtube of this singers?

Alex was my younger brother, a great wordsmith who is sorely missed by his family and friends.