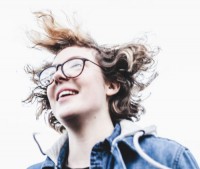 Jessie Dipper is a Birmingham-based singer/songwriter who, slowly but surely, has been making headway in the mainstream music arena. Cross Rhythms radio belatedly picked up on the track "Beans On Toast", from her 2015 EP 'Home', and saw it become something of a radio hit. With a brand new album out, 'Audience Of One', featuring another playlisted song, "Missing You", now is clearly the moment to catch up with this most individualistic singer/songwriter.

Jessie was born in Hertfordshire while her parents were studying at a Cross Cultural Missions college, All Nations, at which her father is now the principal. She stated, "I was brought up with the knowledge that I was loved by an all-consuming creator, and an awareness of the world and the people in it from an early age, having consistently moved to new places overseas and around the UK with the work my parents were doing. Along with two younger sisters, I learnt what it was to make the most of what you had in all circumstances, and to sing with decent pitch - with our mum consistently heckling us for as far back as we can remember to tell us if we were singing sharp or flat - meaning music has always been a fundamental heart beat to life from birth to now."

Jessie started piano lessons ("which I hated by the way!") at age eight. She explained, "It was too linear, and I just wanted to play my own notes instead of the dots on a page." Then once she'd moved to Leigh-on-Sea, Essex, she began guitar lessons at school. By the age of 16, she'd moved to Birmingham where she studied as a singer/songwriter at music college for two years. She recounted, "I was surrounded by the music of different nations, tongues and tribes, with an eclectic music taste from Phil Collins to Westside Story from my parents(!), with my uncle playing a big part in inspiring the guitar in my life, and since the age of 13 or so, it has firmly become an extension of my anatomy."

While still at music college in 2015, Jessie began "playing around with Garage Band for hours on end" to make her unofficial recording debut. She said candidly, "They were terrible recordings, and very shoddily produced, but you have to start somewhere. As for my first EP - 'Yours' - the idea of this was for the listener to experience being in the room with the music, very stereotypical singer/songwriter-y stuff. So I put on a gig, invited a select few friends and family to create an intimate and attentive vibe, complete with refreshments at the end. In terms of its production, my producer (who I've since worked with for both EPs and album) based near Watford, London remastered the original version for me to release what you can hear today. Due to how I've started out in my career my voice has grown substantially, so listening back particularly to 'Yours' feels very strange indeed."

Jessie's 'Home' EP was mostly recorded by Alan Kerry at Hertfordshire's Ackworth Studios. She said, "One of the five tracks, 'Finding My Place' (a song about my sisters), was produced by Jonny Amos with SongLab studios in Birmingham. All guitar and vocals performed by me, piano and midi instruments by said producers."

Speaking about her unexpected Cross Rhythms radio hit, Jessie said, "'Beans On Toast' was written as a reflection on early childhood when specifically living in London and finding it very hard to adjust to British culture/struggling to form close knit friendships due to several losses we faced as a family at that point in life. School in itself for me was very difficult, always seeming an outsider and being misunderstood by my peers, so reverting to building stick houses/learning to whistle (as stated in the song). With the metaphorical and literal 'sanctuary' being beans on toast at the end of a day, in the case that our mum was away and dad was unable to cook the way mum did (not that he's a bad cook - he just experiments in a different way to her. . .). And so was birthed the safe place that was baked beans on toast, where cares could be left at the door, because all that mattered was eating and being together. I encourage people at gigs, before I play this song, to imagine that sanctuary, whatever it may be, for themselves. It's about singing and writing words that are on people's hearts, but don't know how to say it. That's what music and songwriting is for me, so I seek to come alongside people, where they're at, and hopefully bridge the gap between each of our stories."

Her career has been steadily growing over the last four years. She picked out a few high spots. "From IKEA student lock-ins to Lord's Cricket Ground for serval international matches, it's been an adventure. My biggest venue would probably have to be the NEC in Birmingham, played there January 2018 as part of UK Open Mic competition Grand Final. I continue to play as many gigs as I can, connecting with more and more people as I go on. Every musician's journey is different, but what I know for sure is that this is what I want to be doing for the rest of my days in using music to be a part of other people's lives and expressing the more-ness of life."

Probably her most significant step so far has been the recording and release of her debut full-length album, recorded over a three month period with Alan Kerry. She explained, "Alan is also my Godfather as well as my producer, he knows me as an individual as well as musician, so it's an amazing combo to have in someone who has your music in the palm of their hands. Three of the 13 tracks were recorded with different producers around the country. Again, all the guitar parts (electric and acoustic) are recorded by me, as well as vocals and backing vocals. Additionally, we brought in a good friend to play cello on a few of the tracks ('Only', 'Wonder', 'Sit In The Fire' to name a few) and another great friend to play saxophone to add another dimension (in 'See You Again' and 'Wholehearted'). Alan was the master behind the keys, and I would struggle to find a better pianist than him. Drums were recorded in a separate studio to our normal base so to accommodate the works of our drummer who also sat in on the mixing and mastering to add his expertise. So all in all, an incredible project to have the honour of including some extremely talented musicians, and a very much independently done album, released on my own indie record label."

Talking about her new radio hit, "Missing You", she said, "It is one of the oldest of my songs to make it onto the album, I wanted to rerecord it since its first release from 'Yours - Live EP' to give it the 'oomph' I now give it on stage. The story behind that is of driving through the snowy roads of Scotland, having spent wonderful time enjoying the nature of all the mountains and the trees had to give, but being very aware that there was a very crucial part missing from that experience, which will never be fully filled as that person went home earlier than we all would've liked. My cousin died a week before her sixth birthday, we were two months apart in age and were the greatest of friends. Since then I have struggled with letting people in, and 'Missing You' is my expression of that longing just to be in her company once again. These things never leave us, but we learn to grow and adapt and love the people around us while we have them in our lives. As for 'Wonder', this is the oldest song on the album(!). Originally written by Isaac Watts, I decided to put my version of it on the album as the music I make is very much directed to non-Christian ears, people who don't have a faith/are interested or have no interest at all! The fact is, we all have a wonder in our lives, for the 'something-more', this is my wonder, which I know to be true, so the question is what is yours? It's not meant to be a song that forces you into a corner and makes you give your life to Christ, it's simply a song of honestly and intimacy, and in the midst of other tracks surrounding it on the album based around love and loss, it's the anchor point for me."

Jessie does not consider herself a purveyor of "Christian music", as the phrase is usually used. "I feel called into the mission field of 'sticky-floored places', where there's smoke in the air, beer on the floor, and thumping music pounding the walls and ceilings. It's where the people are at, and it's pretty simple really - I believe I have the Holy Spirit dwelling and living inside of me. This means that where my odd-socked self steps, so does the Kingdom. So let the Kingdom come in the darkest and most unchurched and spiritually mixed up places. Music and the arts is an incredible way in which to express what you believe, and your searching for whatever the 'end of the road' is. So in my position as an artist in the mainstream music world, I have to voice my story and lifestyle of wholehearted worship in the way I've been created for - to sing and make music."

Jessie concluded by quoting Joshua 1:3. "'Wherever you set foot, you will be on land I have given you'." She added, "The ground I stand on is sacred ground, so for that reason (among many) I perform in odd socks. In addition to the theological stand point, it is also practically a lot more coherent to take my shoes off when on stage, as my feet don't stop moving with the pedal board at my feet, so am forever turning knobs and pressing different buttons with my toes. I'm getting married in July next year, having been engaged since April to my brilliantly talented film-maker fiancÃ©, Luke. Our collective mission is to consistently wear odd shoes and odd socks, changing culture around us making beautiful things to be a part of other people's lives and fall more in love with God every day - because he rocks, and there's nothing that can get in the way of that."