Jim Bailey: The singer/songwriter taking worship to the extremes 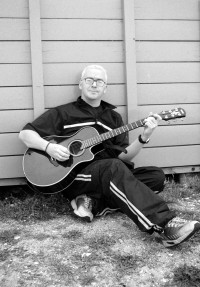 Tony: 'Worship Extreme' seems a much "older" project than previous albums. Are you moving away from children's ministry?

Jim: Extreme worship is an all age worship project, it's been enjoyed by all ages, although "tweenagers" nine-12 year olds and their parents like it the most. Previous albums have had the same elements of dance music, in fact 'Stonking Christmas Mix'" was a full on Christmas dance album. 'Extreme Worship' is just a natural progression from where I'm at and where culturally relevant worship for kids is at. As for children's ministry, I have always spent 50 per cent of my time advising, encouraging, endorsing parents and training children's workers and the other 50 per cent being a parent and children's worker myself. The children's worship songs are just the tip of the iceberg of what the Kingdom Creative trust, the ministry we run, is all about.

Tony: Why did you leave Kingsway?

Jim: I haven't!. It's just that I wanted this album project to have a different feel and to be presented in a different way and so we decided to produce it ourselves. Future projects may be with Kingsway, we'll just take things one album at a time.

Tony: It was a risk doing a version of a classic like Savage Garden's. How's the response been to your take on "Truly Madly Deeply"?

Jim: I don't think it was a risk, it's a great song. I've done it loads of times live over the last few years and loads of people asked and encouraged me to record it, so I recorded it. It's a little faster than the first version and the rap/R&B-style is really enjoyed by everyone. We've had an overwhelming positive response to the song. At the Extreme Worship live roadshows we have loads of unchurched kids and their parents. They hear a song they know, like "Truly Madly Deeply and can relate to the words and melody. It's great to use such a great love song for worship.

Tony: Precisely who or what are the Spicy Camels?

Jim: You have to see them! They Spicy Camels are, help, they've taken over the keyboard and want to tell you themselves.......

Hello, my name is Spitonem and I am 50 per cent of the Spicy Camels, the singing pop group from Egypt, which as you know is just outside of Cardiff. The other 50 per cent is made up of my brother Spitonme. Jimmy boy (Jim Bailey), found out about us, that we were the last living relatives of a tribe that has existed for over 4000 years. We told him our great, great ancestors were there when Noah built his floating zoo and when Moses got a commandment or two, and they carried the wise men to see the Baby Jesus. So he brought us over to your country and we now live in his garage and help him tell others about the best instructions before leaving earth. We travel round with Jimmy Bailey, we sing and do stories and sketches and help Jimmy Boy. After all, he needs all the help he can get. We also have our own comedy songs album coming out in the summer. Spit on you later. - The Spicy Camels.

Sorry about that, as you can see they take over.

Tony: Could you ever see yourself making a recording pitched out and out at the adult club scene?

Jim: I have been very inspired by Carmon Dante (former Tribe member) and what he and the guys are doing in Manchester. We have been holding some alternative worship nights locally, with around 100 young people and young adults attending. I wrote some dance trance music to deejay with alongside some popular club tunes. The response has been very positive. The songs "Extreme" and "Generations" were originally dance tunes but Mark Edwards and I re-wrote them for a younger audience. I love dance music but my calling is first and foremost to kids and their families.