Jimmy Needham: A song-by-song rundown of his 'Not Without Love' album 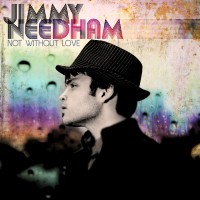 22 year old singer/songwriter Jimmy Needham made a name for himself on the Texas independent circuit for two years with a soulful acoustic-driven sound reminiscent of Jason Mraz and Marc Broussard. With meaningful lyrics, clear vocals and a bluesy acoustic guitar his debut album for Inpop Records 'Speak' (2006) was well received by Christian radio and critics alike. Now his second nationally distributed album 'Not Without Love' is out in the UK through Fierce! Distribution. He describes his new album as being "about the believer interacting with this world and with God." Here is Jimmy's track-by-track rundown.

"Come Around"
Several years ago, I was in a very legalistic place in my walk with God. Don't get me wrong, I was very passionate, very zealous. Everywhere I went I preached the Gospel to people and handed out tracts. On the surface, it seemed as though things were going well for me spiritually, but nothing could have been further from the truth. During that time, God began to expose my heart's condition to me. Here is what I learned: I can share the Good News with everyone I meet, dish out all the right theology and have all the zeal in the world, but if I don't have love for people and love for God, it's all for nothing. That is the heartbeat of this song.

"A Breath Or Two"
I wrote a majority of this record during the busiest season of my life. I was newly married and my wife and I were both full time students. We were also performing out of State every weekend. One weekend in particular, we left class, flew to Australia, played a concert and flew back for class on Monday. I so needed a break and found myself longing for the rest that King David wrote about in Psalm 23. "A Breath Or Two" is me asking God to provide that pause, that rest in the midst of this crazy life.

"Hurricane"
Though it's an uncomfortable thought, before God can really begin to use a person for his purposes, he must break that person. Brokenness is not a popular idea in our culture, but there is usually no sweeter time of intimacy with God than when he takes our life, our sinful habits, and destroys them so that he can build us up again. Yes the LORD is a loving father; yes he is our saviour and help in time of need, but sometimes he shows up as a hurricane. May we embrace him when he does.

"Firefly"
This is a song celebrating my wife. It's quirky. It's fun. It's my way of saying, "You make me happy to be alive!"

"Forgiven And Loved"
You can't give what you don't have. The thing I struggle with most in my relationship with God is the ability to receive his love and forgiveness. For some reason, I have this crazy notion that if I work really hard I will finally put a smile on the Father's face. What I have failed to understand is that the only thing that truly pleases God is God himself. It's true that there is now no condemnation for those in Christ Jesus, but the amazing part of that statement is that it is not based on our deeds which we have done in righteousness, but according to his mercy. May each of us as believers be able to say with confidence that we are in fact forgiven and loved.

"Before And After"
The big, dark secret of my past was my addiction to pornography. Since the age of nine, I had been an addict. I didn't become a Christian until my second year of high school, but the battle with porn didn't conclude there. In fact, that is where it started. I hated it, yet I kept returning to it. It was such a time of frustration, shame and disappointment in myself. One night after stumbling yet again, I fell to my knees calling out to God, trying to tell him how sorry I was that I had let him down. In that moment I had a vision. I saw the Lord kneeling beside me. Slowly he slipped his hand onto my back. He didn't say a word, but he was there, and I knew that he was loving me through my struggle. That moment gave me a new sense of hope and eventually led me to be completely free from pornography later in college.

"Tossed By The Wind"
I studied history and philosophy in college. I was always amazed at how quickly and without question students ate up these godless doctrines and views. The Bible warns us to guard ourselves against "empty deception. . .according to the elementary principles of this world." This song began to form in my head as I sat through my last philosophy course. It's a fictional story of a kid named Tossed By The Wind who leaves for college and his simple faith is tainted by these "empty deceptions."

"Unfailing Love (Kelly's Song)"
This is a very dear song to me. I wrote this to propose to my wife, Kelly. She is my delight and my crown, and I wrote this in hopes of conveying her worth to me and my commitment to her. The Lord says to Israel in Isaiah 54:10 "For the mountains may be removed and the hills may shake, but my unfailing love for you will not be removed." Though I know I cannot love her perfectly, my vow remains. No matter what happens, my love for you will not be moved.

"Rend"
The book of Joel speaks about a time of judgment and devastation for God's people because of their sinful ways. And yet, even in the midst of judgment the Father's compassionate hand is extended. "Even now," declares the Lord, as he invites Israel to turn from their sins and cling to him alone. However, as he invites his people back into relationship with himself, there is one requirement from God. "Rend your hearts and not your garments." The word "rend" means to tear apart. What God is saying to them and to us today is this: I don't want a show from you; I want an authentic heart change; save the performance because I am concerned about genuine repentance, not fabricated repentance.

"The Author"
This song is a praise of God's absolute sovereignty over all things. It is not only the case that God foreknew Jesus would come and rescue us on the cross, but also that it was ultimately his idea. The redemption story is so amazing because of the fact that it is God-crafted. It should make the Christian rejoice to know our God is, and always has been, in control of the story.

"The Great Love Story"
This song is the Gospel from start to finish. It begins in the Garden of Eden and concludes at the cross. Each chorus progresses as the plot of salvation plays out. As the theme of this record is love, I thought it entirely fitting to conclude it with the Great Love Story, God's rescue mission for humanity.