Jocelyn Brown: She's got the power through True Praises

Everyone knows the voice. Her blisteringly soulful proclamation "I've got the power!" has been heard in dance clubs and TV commercials throughout the land though it's only R&B buffs who know that that sublime, energising sample comes courtesy of soul singer and now worship leader Jocelyn Brown. UK-based Jocelyn has long been a fixture of Britain's R&B, pop and dance scene and down the years has worked with Michael Jackson, Bette Midler, John Lennon, Luther Vandross, Culture Club, Quincy Jones, Roberta Flack and Teddy Pendergrass not to mention dance hitmakers Snap!'s sampling of her voice. Yet despite her years in the spotlight it's her recently released 'True Praises' album on Kingsway that the diva unhesitatingly calls attention to. "My career highlight so far? It has to be this album! I have been longing to do a praise and worship album to our Saviour. I want to say 'thank you' for all that he as done and to got on with my job of bringing others to the Kingdom of God through my music ministry. It was done in record time and it showed me that when God is in the midst all timing is his and not ours. What beauty and love was seen as this album came together."

Recorded at Ralph Salmin's Bunker studio and produced by that doyen of British gospel production, Nicky Brown, the album features old school hymnody like "Old Rugged Cross" and urban stylings like "Stand Up". Says Jocelyn, "I am proud of all of them but the one that sits out the most is 'True Praises'. Why? Because the words are so simple but so powerful. To praise the Lord in this way is so moving and beautiful."

The singer was born on 25th November 1950 in Kinston, North Carolina and was raised in the church. She told Cross Rhythms broadcaster Mike Rimmer, "My grandmother, my mom, my uncles and my aunts were all a ministerial family that did different churches' convocations and services. I was a part of the brood that they took around, you know the little ones, they followed their moms and pops and stuff, I was a part of that crew. Of course, my first debut was at three years old on stage with 'He's Got The Whole World In His Hands' and from that point on it was about my grandmother, myself, my aunts and my uncles all performing for different situations in church. I was raised in church from Monday, Wednesday, Thursday, Friday, Saturday and Sunday - was my days, okay!"

Unlike many church raised singers who subsequently found a career in R&B, pop and dance music, Jocelyn's move, in the late '70s, to record studio sessions with mainstream acts like Musique, Inner Life, Bad Girls, Salsoul Orchestra, Disco Tex and The Sex-O-Lettes, Cerrone, Chic, Soiree and Change didn't get her ostracised by the church. She says, "It wasn't an issue of 'why' I crossed over because my family was involved in both worlds - my aunts and my cousin, Brenda, were part of the secular world doing Barbara & Brenda and working with Inez and Charlie Foxx, doing different background sessions for different artists. My mom and my aunt were pursuing the gospel duet singing career, so it was never a choice of like 'well what choice do you want, what do you want to do?' It was just that, one day my aunt called me up and said 'I need you to come in and do a background session for me.' That was my aunt and my cousin Brenda, I went in and did it. Unbeknownst to me it was to lead to a career of doing background sessions. So that was the real situation that went down. But church was always the focusing point in our family. We'd go to church on Thursdays and especially when we moved to New York it got a little different so we were going to Mount Calvary Free Will Baptist Church. I kind of changed over to Pentecostal because I liked and enjoyed the fact that my uncle had become a new minister. I went under his 'doctrination' so I kind of felt a different kind of a way but it didn't stop me from working in a secular world." 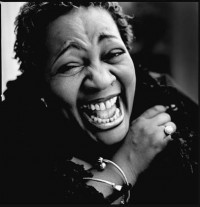 In 1984, Brown released a number of singles in her own name, including "Somebody Else's Guy" (later rerecorded in 1997 by CeCe Peniston), which made number two on the Billboard R&B Singles chart and number 75 on the Hot 100. It became the title track for her debut solo album, released by Warner Bros that same year. Jocelyn scored another big dance hit two years later with "Love's Gonna Get You". But it was singing on other people's records which brought Jocelyn most of her income. Phenomenally, her soulful tones are heard on more than 20 hits on the Hot Dance Music/Club Play chart, four of which have hit number one (not including two number one dance hits she had in the late 1970s as a guest vocalist with Patrick Adams' studio band, Musique). She toured worldwide with Boy George as a backing vocalist with Culture Club in 1985 and appeared on their 1986 album 'From Luxury To Heartache'. In 1987 Jocelyn co-wrote with Boy George his top 30 UK hit "Keep Me In Mind".

In 1990 Jocelyn relocated to London. That same year the line "I've got the power" was sampled from Jocelyn's 1986 dance hit "Love's Gonna Get You" by electronica group Snap!. It was a worldwide hit as "The Power". But like so many artists whose talents are sampled Jocelyn received neither the artistic credit for "The Power" nor the full financial reward for providing and singing the hit's unforgettable hook. Comments Jocelyn, "People 'do business' without 'doing business' if you understand what I mean and they did no business with me with this but they used the opportunity to put this product in a position that just went all over the world. So I'm appreciative of the fact that they chose my voice to be the voice to make 'The Power' made aware of across the world. But I don't appreciate the fact that they did not do the proper business with me."

Brown appeared on both seasons of BBC One's celebrity singing talent show Just The Two Of Us, first with TV presenter Matt Allwright (placing sixth), then with actor John Bardon from EastEnders (placing fourth). In 2006 Jocelyn issued the album 'Unreleased'. Her cousin, Shaun Gaskins, says, "She took it back to what she knows best, real singing. A lot people should take note and watch how a real diva gets down."

In 2007, Brown collaborated with The AllStars both live, at a series of music festivals in the UK, and in the studio recording of their album 'All About The Music'. She also sang the United States national anthem, "The Star-Spangled Banner", at Wembley Stadium, for the first ever regular season American football game played on foreign soil.

In 2009 Jocelyn got a chance to record some songs of faith. At the famed Abbey Road studios she contributed her talents to Kingsway's 'Worship At The Abbey' CD/DVD project, offering up anthems of praise alongside such worship leaders Stuart Townend, Tim Hughes, Smokie Norful, Lou Fellingham and Geraldine Latty.

Finally, in 2010 Jocelyn began working on her long awaited gospel worship debut. One of the outstanding tracks on 'True Praises' is "Jesus Is All The World To Me", a smouldering duet with Carleen Anderson, the daughter of James Brown's long time vocalist Vicki Anderson, and now an established R&B singer based in London. Says Jocelyn with real affection, "Aaw, my best buddy Carleen Anderson, she's from the same neck of the woods as I am as far as church is concerned. Her grandfather and her grandmother - grandfather's a Bishop and her grandmother's the mother of the church - she was raised in this tradition, she knows the Lord, she loves the Lord with all her heart. Since I've been in London God's brought us together. We've been collaborating and writing together and singing together but more than anything else Carleen's voice is the same as my mother's. I said, 'Carleen, please, on this album would you do it with me?' and she said 'Yes.' I said, 'This one song that I love, would you mind?', she said 'Yeah, I remember that!' and she gave me her rendition of it and everything. We collaborated and this is my rendition and Carleen's rendition of back home singing, with the guitar - ha ha!"

Another standout on the album was co-composed by Jocelyn. She recalls the genesis of "He Reigns", "I was sitting in the house - I play piano and I had some little tunes and I was messing with them. I came across this title 'He Reigns' and I thought 'wow'. So of course I put it on a cassette, because that's what I have here at the house, a little cassette player, and I took it to the studio with myself and Nicky Brown and I played it for Nicky. He said, 'Hey, I like that, let me hear a little bit more of that,' and he just took it and kind of reconstructed it, did it up and gave it a facelift and everything and we sat and wrote some lyrics to it. That's what we got, 'He Reigns' and the best part about it is the chorus was established before the verses. It's a wonderful song and I love it."

So what is Jocelyn hoping for 'True Praises'? "I'm hoping that the album is an opener to the door of God's Kingdom that he can reign in listeners' lives and just give them joy, even at the moments of despair. Just put the album on and boy, will you have a good time! Every time I put the album on I find the Lord there, I feel him there and I'm grateful. I wind up worshipping and screaming all over the house being grateful."