America's JOHN DAVIS is no newcomer to gruelling gigs in rock clubland. Now though the singer/songwriter has a whole new spiritual focus. Phil Whittall reports. 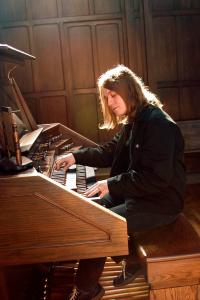 New American CCM artist John Davis has a fine self-titled debut out in the Christian bookshop racks but the rock-orientated singer/songwriter is no newcomer to the scene. A few years back he was the lead singer of a rock band out of Knoxville, Tennessee called Superdrag who in 1996 made the US charts with their 'Regretfully Yours' album for Elektra. More albums, MTV exposure and big money tours followed. But so did John's alcohol abuse. Davis had grown up in near-rural Tennessee, just next to a small Baptist church that sat on a plot of land donated by his grandfather. But as his drinking grew worse and worse, his life spun further and further from his control. "I had a charter membership in the 'Bon Scott Club'", Davis says, referring to the AC/DC singer who died from an alcohol overdose in 1980. "I can make light of it now, but it really did almost become a life-or-death situation."

Then came an event Davis describes as his "road to Damascus" experience. "Before I had a chance to think about what I was doing, I started praying. I cried out to God," David says. "Instantly, I knew that the void inside me would never be filled with the liquor. I just got tired of running. I remember thinking that I needed peace, and it just came over me like a cool breeze - God's peace. At that moment, it was like a huge burden had been lifted. I got to my folks' house looking like I'd been run over by a truck."

That dramatic conversion experience caused Davis to re-embrace the faith of his youth and give up the behaviour that was destroying his life. Davis still honoured his commitments to Superdrag, including the completion of the band's presciently titled 2002 album 'Last Call For Vitriol' and a tour. But, he acknowledges, "My heart just wasn't in it anymore."

Talking about his debut solo album Davis says, "When I first started writing songs, my tendency was to always try to be clever and come up with some unusual way of saying whatever it was I wanted to say. As time went by, I started trying to narrow it down to the plainest English I could possibly think of. I wanted this record to have an overt Gospel influence, and not in some thinly-veiled kind of way. I wanted it to be straight out of the church that I went to four times a week as a kid! They sang the old songs."

On the 'John Davis' album the singer singles out "Jesus Gonna Build Me A Home." "That's just straight-out Gospel music," he says. "As R.S. says, 'It's a little bit tie-dyed.' It has sort of a music-from-Big Pink-meets-"Hey Jude" kind of feel. But to me, it's straight-out Gospel music." The album is already getting considerable critical acclaim and John has recently formed a touring band, The Astronaut Pushers - featuring Sixpence None The Richer co-founder Matt Slocum and artist/producer Sam Ashworth (Michael W Smith, Taylor Sorensen).

John is encouraged by the response to his solo debut. He says, "It's been received more warmly than I had any right to expect. I don't feel any sense of entitlement - I just hope for a fair shake from people who bought my previous records. For now, I'm touring mainstream club dates, playing mixed audiences of old fans and new. To get up on stage at the Khyber [nightclub] in Philadelphia feels like a confrontation - like trying to shine light into darkness. But singing it in God's house, it's like light's shining on you. And I think we'll do both."

As he moves into this new phase of his life, Davis says he's made his peace with the music he made with Superdrag, a repertoire that represents a 10-year period of his life. "On the one hand, I'm really proud of those records," he says. "They're good. At the same time, it almost feels like that work was done by a completely different guy. There's a real emotional distance between life then and life now. That's one of the nice things about doing a solo record," he says. "If it's pleasing to me and glorifying [to] God, then I'm doing something that I can take satisfaction in."