In The Living Composers Society series, John Irvine looks at the work of one of Christendom's most popular composers, JOHN RUTTER. 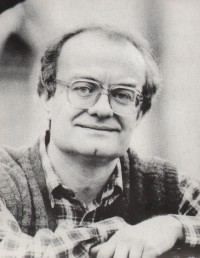 John Rutter has managed to embrace both popularity and critical acclaim. He has been described as a master tunesmith whose technical ability has been harnessed to his desire to create tuneful, harmonious, tasteful music for both the church and the concert hall. He makes a living through commissions for original pieces from around the world (through his own record company), and conducting.

Rutter was born in London in 1945 and very nearly entered St Paul's Cathedral Choir. A slight misunderstanding - the young Rutter erroneously believed he wouldn't get any Christmas presents if the choir had to sing on Christmas day - led Rutter from St Paul's to Highgate School which had a chapel choir and a strong tradition of music. Rutter, as a boy soprano was laying groundwork for the future. His musical influences blossomed into composition, mainly works for choir.

He then went on to study music at Clare College, Cambridge, publishing his first compositions while still an undergraduate. It was at this time that Sir David Willocks asked Rutter to help him complete the best-selling 'Carols For Choirs' series. The success of Rutter's arrangements and original compositions helped to make his name synonymous with Christmas among Anglicans. After graduating, Rutter was director of music at Clare College, a post he gave up in order to concentrate on composition.

Rutter's church 'anthems' are used frequently in Anglican worship. They were shaped by two considerations: firstly, the performers and the occasion very much determine the complexity of the music and the instrumentation. Secondly: the texts, for Rutter, are crucial, and are always chosen with great care. These considerations also apply to the large-scale choral pieces, which were designed for performance either in the church or the concert hall. They easily transcend Rutter's Anglicanness, which often acts as a straightjacket on his carols and anthems.

'The Falcon' (1969) was Rutter's first large scale choral work. Based on medieval and Biblical texts, it is rich in the symbols of the Eucharist and steeped in the legend of the Holy Grail (no Monty Python jokes, please). Gregorian chant was used as the basis of the piece, but the melody is developed and enhanced by the presence of a full orchestra and choir. 'Gloria' followed in 1984 as a result of a commission by the First United Methodist Church in Omalia, Nebraska. Brass fanfares usher in the first movement while a mighty choir cries "Glory to God in the highest". The second section is based on arpeggios played by an organ, but later taken up by the brass section. The third movement dominated by brass and voices brings the piece to a stirring close. Rutter proves himself to be a composer with a complete grasp of compositional methods who really can 'raise the goose bumps with a stroke of a pen'.

A decade later, 'Requiem' followed, and it is this work probably more than any other that has boosted Rutter's reputation as a 'serious' composer. The American connection continued: the work was premiered in Dallas, Texas in October 1985. 1990 saw Rutter's greatest achievement to date: a setting of the 'Magnificat'. To avoid outright competition against established settings of Mary's prayers, Rutter took a different approach, basing the first movement on a style of music common in Latin American festal processions in honour of the Virgin Mary. The result is music full of joy and praise to God. The Biblical text is supplemented by a beautiful setting of a 15th century English poem "Of A Rose, A Lovely Rose" which is the still centre point of an otherwise powerful and joyous piece which moves from the power of "Quia Fecit" (he that is mighty has magnified me) to the triumphal praise of "Gloria Path" (Glory to the Father). Yet again, the piece was first performed in America - this time at Carnegie Hall, New York. Strangely, it seems that our American cousins have been quicker to pick up on Rutter's music than we have!

Rutter has also found time to compose a variety of other types of music. 'Suite Antique' (1979) is an instrumental piece for flute, harpsichord and strings which pays homage to the Baroque style of Bach's day. For the King's Singers, Rutter wrote 'an entertainment' based on the 'Wind In The Willows'. It's quite sweet really, although I can't work out if it's meant to appeal to adults, children or childish adults! A cycle of choral texts by Campion, Shakespeare and Mr. Anon, 'When Icicles Hang' allowed Rutter to make a contribution to the Campaign For Real Ale.

John Rutter spends about half his time composing, and the other half conducting, usually with the Cambridge Singers, a choir he formed in 1981 and with whom he records. As he approaches his fiftieth birthday in 1995, he will have an enviable list of achievements to look back on, and I suggest that he would rate his work as a conductor as being on par with his success as a composer, Rutter is far from ready to give up composition, however; and if his choral works in the future equal or surpass 'Magnificat' then we will have much to look forward to from him.