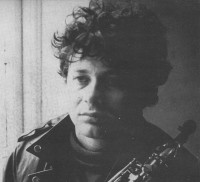 It was at a Clannad concert that Wolverhampton-based Jonathan Day found his present musical course. "I had been working in a Christian rock band called Torch. But here was the music closest to my heart. I went with my wife to the Wrekin, the hill which has inspired poets like A. E. Houseman, and there we received a call. My aim is to create music of spirituality and beauty with a definite Christian message."

No, Jonathan's not too worried about being accused of 'New Age' vagueness. "I have always loved Celtic music, not to mention the rock-circles and other remains of our past which litter the landscape of these islands. When I wrote 'Callanesh' for the album I was describing just such a mysterious place." Unlike the puritans, who smashed the Avesbury Stones two centuries ago, he is more interested in asking what the pagans were looking for than in condemning them outright.

And as for the vague collection of religious ideas called 'New Age' he sees the phenomenon more as evidence of a need for the truth rather than as any great threat to it. "People are searching, like the stone worshippers - it's up to Christians to point them in the right direction."

Jonathan goes on to tell a story about the discovery of a whale bone recently, and the fear it engendered on a Scottish Island. Pagan fear isn't dead, he explains, but Christ is "utterly essential" to overcoming it.

Going solo meant giving up his job, and it hasn't been easy. There have been financial difficulties and relationship pressures. Fortunately his wife, Beverly, is absolutely committed to the same goals. "God makes all the difference in marriage," comments Jonathan. "It doesn't mean Beverly always praises me. She is my strongest critic and it brings out the best but it's not always easy to swallow her criticism."

I ask Jon about some of the songs on the album. He is particularly fond of a saxophone solo dedicated to his grandfather, with whom he had a very deep, but in many ways unspoken, relationship. "You only know part of people," he says. He tells me about a boy with cerebral palsy who is hyperactive. Jonathan was delighted to have received a letter saying that a recording of "Grandfather's Song" is being used to calm the boy down and help his mother to cope.

This is more important to him than all the praise or criticism that the professionals can mete out.

He tells me about "Johannesburg", a song about his time living in South Africa. As a 'privileged white boy' he didn't feel much compassion for the legless beggar on his blanket who was trucked out every day by the racketeers who lived off his begging. Later, as a Christian, the memory returned, and it's just such experiences that Jonathan wants to put into his songs. As Christ's representative he can't do half the things he'd like to, but he can sing about them and so inspire others to work for the cause of justice.

Jonathan very much enjoys school's work and gigging, but he's let some live work slide to finish the album. He's unashamedly pleased with the result. Hardly surprising since he wrote it, produced it and played everything from the Bodhran upwards. It's just the sound he wants - nothing imposed from outside, and he's had time to play around.

Will he do the same again? It's too early to decide, he says. And there's one area of work he'd really like to duck out of next time round...promotion. Whatever else he may be, Jonathan Day is no blatant self-publicist.

What about the future? He recently played with a three-piece band on this year's Greenbelt Fringe. They're called The Riff. "It's the sort of naff name you end up with after an evening spent searching," he tells me.

Now he's embarking on a tour with Midlands singer/songwriter Paul Poulton in the autumn, and Fraser Grace (from Back to Back Theatre Co) wants to take their Edinburgh Fringe Show 'Angels, Ghosts And Mortal Men' to London. Jonathan has worked with various theatre projects, and it's unlikely that he'll ever allow his talent to be restricted to one limited area of expression. I turn the tape off and Jonathan leans across. "Whatever you do, make sure you get in the letter about the kid." I promise that I will.

The opinions expressed in this article are not necessarily those held by Cross Rhythms. Any expressed views were accurate at the time of publishing but may or may not reflect the views of the individuals concerned at a later date.
About Gerald Kells
Gerald Kells is a poet and writer who lives in Walsall, West Midlands.