Rock chick JOY WHITLOCK recently released her first EP in the US. Megan Dickey caught up with her in Memphis, Tennessee. 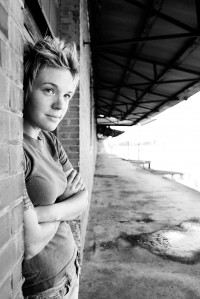 It's a hot summer night in Memphis, Tennessee as most summer nights are in the heart of the South. The parking lot is full and I know the club will be crowded. Stepping into the small but popular local haunt The HighTone, I check my name off the guest list and mingle my way through the smoke and the tables where local music fans have gathered to hear some quality Memphis music. I make my way to the bar where I have a good view and say hi to a few friends who are there for various reasons. My intention however, besides a night out, is to hear Ardent Records' newest recording artist Joy Whitlock. The bill for the night is three bands with Joy Whitlock being the front-runner. When she takes the stage she doesn't waste time and gets right to what she came here for - to play her music. As soon as she plays her first chord the crowd stops chatting and playing pool to listen to this passionate, awe inspiring rocker. Joy brings all she has with a full band backing her the entire way. Although her set is short she has a variety of songs ranging from the intense rock song "Fake" to the slower, more intimate ballad "Traces Of You". By the close it's crystal clear that Ardent Records have made a wise decision in adding Joy to their roster.

For the great American public, let alone an international audience, Joy Whitlock is a new name. But she isn't new to music. Joy grew up a minister's daughter but admits she went to church because she was made to go. Joy didn't consider the spiritual things of life. "I gave it no thought whatsoever for the majority of my life, until I got saved when I was 23. So it's only recently that I recognised who God was or gave him any kind of acknowledgement." I ask Joy how did she go from wanting nothing to singing and writing songs about her relationship with the Lord. She recounts a period feeling convicted and aware of the sins in her life. Then in April 2004, her mother came for a visit and begged Joy to see the film The Passion Of The Christ with her. With hesitation Joy agreed knowing to some extent what she was stepping into. "I was terrified to see it because I knew that I was going to have to change," she says. "I don't think there is any way anyone can go and see the film and come out unchanged." As Joy wept throughout the movie's depiction of an innocent man beaten and killed for her, Joy knew that her life was changed. She recalls going home and getting on her knees and asking God to get her out of the mess she was in. It was the beginning of change for Joy.

The first steps were difficult because she knew she had to cut off and leave everything in her previous life. "Before I saw the movie I didn't really see the depth and the magnitude of what I was doing. When I was saved it was like a filter had been removed from my sight and I could just see it so clearly. I just understood exactly the things that I was doing and how it was harmful and how it was just sinful and how he is a holy God and how he can have nothing to do with those things." Leaving everything, including all her friends and the band she had dedicated three years to, Joy began to build a new life. Once she left everything in her life God's blessings began to flow over her. Ardent Records, the Memphis record company that has established a foothold in America's CCM scene, came calling after taking notice of her singing on some background tracks in the studio. Talking about the writing process and her inspirations Joy comments, "A lot of things inspire me. People inspire me, movies, other musicians. It doesn't take much. And I do usually have to be alone. I've tried to do the whole co-write thing but it doesn't really work for me. Because I think that I am somewhat of a recluse as it is." Thinking about songwriting Joy laughs at remembering the first song she ever wrote - a rap song. I think it is a good thing that she stuck with her guitar and rock-heavy tunes.

Those who've heard the edgy, rock drive of her debut 'The Fake EP' will know Joy still sticks to heavy guitars and songs leaning more towards rock and roll. But her lyrics almost resemble reading part of Joy's diary. Her songs are about struggles in her life and things that she faces.

She doesn't want to be confined to just playing in churches and youth camps. "I'd really like to play in the secular world as well as I don't really think that playing to Christians is going to reach lost people. I know that everybody says that there are unbelievers in church as well. I do think that a positive message is a good thing to show everybody and not just Christians." The whole idea of being light in the darkness is the approach that Joy is taking. Remembering watching Joy from the stage I recall seeing her turn to the right and catching a glimpse of her brightly inked upper arm. I ask Joy about her tattoos. She explains that it is a stained glass window with a dove and simply signifies the Holy Spirit.

Joy Whitlock has arrived and is ready for her music and words to be heard. She delivers a direct message of her struggles and love and God's grace through guitar-driven rock. I have confidence that her name and message will be causing more of a stir in the next year.

On Sunday (9/30/07) I saw Joy for the frist time. I was stunned at what I heard from her. I fell in loved with the music that I heard. I AM GOING TO BUY THE CD THAT IS COMING OUT NEXT YEAR. Also thanks for siging my hoodie. It means a lot to me.
I am going to keep you in my prayers Joy! Have fun!

YOU WERE AMAZING TONIGHT!!!! I saw you at Yucaipa Christian Church and was so blown away by you and your lyrics really touched me in so many ways.....THANK YOU for making me feel again what i have needed to feel for so long!!

I have heard many people try to describe Joy- without much success I may add- but you have given people a true glance at who she. Joy will never fit any mold that this world creates for her, because she was created for something much more than this world could ever offer her! She is talented, creative, but most of all she is love.....she is my little sister and there are no words.....