Judah & The Lion: The "alt folk" trio with an unclassifiable sound 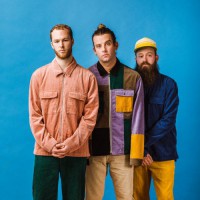 Judah & The Lion, from Cookeville, Tennessee, have been tying critics in knots for years as they've tried to describe their sound. Some have suggested Americana, folk and bluegrass while others have suggested rock, electropop and hip-hop. However much the trio resist pigeonholing the fact that their latest album 'Pep Talks' has delivered a phenomenal five xRhythms radio hit - "Quarter-Life Crisis", "Over My Head", "Jay Bey", "Passion Fashion" and "Get Go" - clearly indicates it's time to fill in some detail on the mainstream's hitmakers whose 'Folk Hop n' Roll' went Platinum in 2016.

The band consist of Judah Akers (lead vocals, guitar), Brian Macdonald (mandolin, vocals) and Nate Zuercher (banjo, vocals). They met in 2011 while attending Belmont University in Nashville and began playing an organic, acoustic sound which instantly connected with audiences. The band won Belmont's 2012 Christian Showcase and Best Of The Best competitions and immediately began recording. Judah told IndieVision about the early days. "I had played in worship bands and had been writing songs. I was at Belmont and I called Nate to see if he would be interested. I knew him because he had a beard and played the banjo. He brought along Brian and it just fit. It worked together as musicians and as people. [Our first EP] 'First Fruits' was basically a worship EP and I thought Judah & The Lion would be a worship band. Brian and Nate brought up the idea of reaching a broader audience. The Lord told me to get him out of the box I had created for him. So 'Sweet Tennessee' was a shift to connect with a wider crowd."

'Sweet Tennessee' was released in April 2013 and in days it was charting on Billboard, number two in the Bluegrass Albums chart, number nine on Heatseekers Albums and number 15 in the Folk Albums listings. In the autumn of 2013 and spring of 2014 Judah & The Lion opened for Drew Holcomb & The Neighbors. In the same year they released their debut full length album, 'Kids These Days'. It was a hit making 102 in America's mainstream album chart. The band toured the US opening for Matt Kearney and Ben Rector.

But it was their second full length album 'Folk Hop n' Roll' which expanded the band's sound. Produced by Dave Cobb (Jason Isbell, Chris Stapleton) with drummer Spencer Cross taking a key part, it was recorded in a series of quick takes, aiming for performances that sounded real and raw rather than polished and perfect. Everything was done in just two weeks. The goal was to fuel the album with the same electricity that fills the band's live shows. The songs on 'Folk Hop n' Roll' incorporated fuzz bass, hip-hop percussion alongside the propulsive banjo riffs.

"There's no boundaries," said Akers. "We wanted to make something raw, something with attitude. We all grew up loving these hip-hop beats, so why not make an album that has the grit of Run DMC or Beastie Boys, along with all the folk instruments that we play?" Judah & the Lion toured extensively through the US in support of the 'Folk Hop n' Roll' album including headlining shows throughout the country. The band also made festival appearances at Bonnaroo, SunFest and Hangout Fest and opened for Twenty One Pilots on their Emotional Roadshow Tour.

In March 2017 'Folk Hop n' Roll Deluxe' was released. With four new songs, one of which "Suit And Jacket" was a big hit on Alternative Radio charts, the rebooted version of the album further increased the band's fanbase. Said Akers at the time, ""This record was made for the live show. Our shows are all about the experience we share with our fans. We know that people work everyday jobs or go to school, and they're dealing with life, and yet they're still choosing to spend the night with us. We don't take that lightly. We give them an experience. We throw an absolute rage. And all the songs were made with that in mind. They're fun, carefree and youthful, and we live our lives that way, too."

Judah & The Lion toured extensively in support of the 'Folk Hop n' Roll Deluxe' album including sold out headlining shows throughout the US, Canada and Europe. The band also made numerous festival appearances on many top rated programmes.

The 17-song 'Pep Talks', released in May 2019, explores difficult thematic elements such as divorce ("Pictures ftg Kacey Musgraves") and alcoholism ("Queen Songs / human.") mixed with tracks covering lighter topics such as "GoofBallerz" and "Sportz". In recording the album the group decided to ask well-known mainstream artists Kacey Musgraves and Jon Bellion to join them in the studio. Ackers told AltPress website, "We're super honored to have both of those artists. We look up to them in our own way very much. We've crossed a lot of genres off in our records and we've never had a feature before. But this time we're like 'Man, it'd be really cool to dive into what it would be like to have a guest vocalist.'"

In addition to mixing it up with new contributions, 'Pep Talks' has a wide array of sounds. There are beautifully intricate instrumentals such as "Pep Talk" and powerful dance tracks such as "Quarter-Life Crisis," but there's one song that's especially close Judah's heart. "Queen Songs / human." is a personal reflection about his mother's struggle with alcoholism and what his family's experience has been like helping her through it.

Said Ackers, "For me, songwriting is some of the best therapy. People probably wouldn't know this about me, but I tend to be a little bit of a 'bottler.' I bottle a lot of emotions up, [and] then one day I just explode. [The songwriting process has] helped me to process them in ways that come out through a creative outlet instead of blowing up or getting angry. I think releasing music has done just that. We wanted to release these songs hopefully to encourage people in all aspects of life -whether you're going out of control, you're feeling depressed or you're feeling alone - that you're not."

Ackers concluded his AltPress interview by answering the question, what was Judah & The Lion's overall message. He responded, "It's stupid that we have to say it, but, race, politics, economics, wherever you're from, whoever you are, whatever sexuality, you as a person, your story matters so much. Your story and your perspective and what you're going through matters so much because you are human. You are worthy of love because you are human. No matter what your story is, your story doesn't define who you are. You get to define your story. We're trying to define our story with hope and with a message of unity and hopefully love."