Julia Bradley: The British singer/pianist says The Cat's Out

With no record company hype, just a heart to share spiritual truth, JULIA BRADLEY is building a growing reputation as a very special kind of singer/songwriter. She spoke to Marie-Louise Flint. 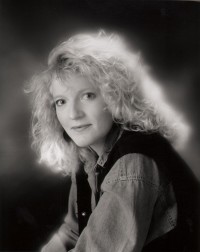 Writing songs about your innermost thoughts, feelings and experiences has long been the road most trodden by singer/songwriters. It's a hard road too, particularly when you've embraced the Christian faith and believers are forever running a spiritual slide rule over your songs, checking for any hint of personal compromise or doctrinal unorthodoxy. Yet over the past three years a new singer has emerged in Christian music ministry circles who not only sings songs of luminous honesty but is prepared to sing of fears and failings as well as hopes and victories. Julia Bradley, with her hauntingly poignant piano-led music, is today reaching an ever-expanding circle of enthusiasts. Her second album The Cat's Out', produced earlier this year at ICC by Johnny Markin, says more in one song than many a big budget US CCM album can manage in 10.

Julia took a moment's break from moving house to speak about her life and music. I began by asking her whether the songwriting process is easy for her. "Sometimes a song can take five years, like 'Running From Ninevah'. Other times, like 'Back To The Book', I wrote in about 10 minutes. With that one I was actually in the bath and it all sort of came to me. I wouldn't say it was a 'word from God', but maybe it was. There was very little I had to do with that one. It was almost written for me. I just sat there and thought this sounds good. And went for it. But, as I said, other times it can take years of work before I'm happy with a completed song."

Julia's progression into Christian music ministry was far from being carefully planned out. "It was very strange really," said Julia. "A few years back I happened to be playing piano in a room at my sister's house. Somebody heard me who happened to know someone who was looking for a player to sing at a service. So I got asked if I'd sing at the meeting. They had a speaker at the meeting and that was the evangelist and youth worker Nick Pollard. He heard me play and really encouraged me. He really has had to pull me by my hair and drag me along. But eventually his encouragement got through to me and I went to work with him in Southampton. I didn't actually go until four years later!"

Julia grew up in a Christian home. "My father was a Baptist minister. I can't really say at what definite moment I became a Christian. I did make a commitment when I was seven - I vaguely remember doing that. It was kind of over a long period of time really. I kind of made several steps of faith. I really came to grips with my faith when I was about 18 and left for teacher training college and I didn't have to go to church. I suddenly thought I was a free agent. But I found I still did want to go and I was also wrestling with clinical depression at that time. So those two things were a bit of a crunch time for me where I had to make a decision where I was going to go. That was quite a difficult time."

In 1989 Julia finally took the plunge and went to Southampton to work as an infant teacher. She began doing more and more music ministry with Nick Pollard. "Nick felt that because the music had helped me through my depression it was something that could help other people as well. I mean, I've got to be honest; I'm still really surprised when people do find my songs helpful. Nick has gradually encouraged me to do more and more engagements - festivals, concerts - bigger and bigger things."

In the summer Julia married and has now re-located to Mansfield. "I'm actually looking for a job. But there is a possibility that I'll be doing more music, maybe next year. Music is not something I've always dreamed of doing and I feel my teaching does help me to keep my feet on the ground and not to forget who I am."

Julia used to battle tremendously with stage nerves. But it's a battle she's winning. "I really was very afraid of being on stage. I had to ask WHY am I afraid? What's the worst thing that can happen? I'll go wrong and then they'll throw tomatoes or something. So what if that happened? I look a fool so often anyway; ask my husband. It was only my pride that was making me afraid. Once I realised that it really set me free. I saw it didn't matter. To be fair the audience doesn't have to like my music, they don't have to get the tape. If (my music) is not what they like that's their choice and that's fair. I don't like everything. Nobody does. I think singers must escape from the delusion that they've got to please everyone."

Not that singing her haunting, bittersweet and devastatingly real music is ever easy. Julia is candid about the struggle. "You feel you're putting your soul on the line sometimes. As I say, I'm not so nervous about that side of it now. I'm so touched when people say 'thank you for doing that' because it really helps me see that this music thing, for all its pitfalls and challenges, is worth it. It's hard but if just one person feels they can sort something out in their lives then it is worth it."

The opinions expressed in this article are not necessarily those held by Cross Rhythms. Any expressed views were accurate at the time of publishing but may or may not reflect the views of the individuals concerned at a later date.
About Marie-Louise Flint
Marie-Louise Flint is a Cross Rhythms editorial assistant currently living in Tavistock, Devon.

I saw Julia perform at Greenbelt and her songs, lyrics touched my soul!!! I have just listened to the signed copy of 'Against the Tide' I have and I am in tears!! Her depth and vision in her music is amazing!!! Thank you Julia!!