Julie Dunn: A classy singer showing jazz buffs "What's It All About" 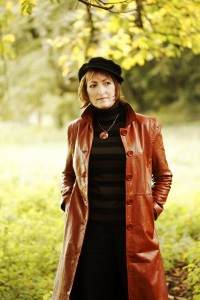 Somerset-based jazz singer Julie Dunn (nee Brown) has been succinctly described by Chris Parker of the Vortex Jazz Club as "a class act." And anyone who's heard Julie's fresh, inventive interpretations of standards like "It's All Right With Me", "You Go To My Head" and "Alfie" on her album 'What's It All About' will agree with Parker's assessment. Born in Stockwell, London, both Julie's mother and father were jazz crooners and big band jazz was always being played on the Brown stereo. Julie had piano lessons from age seven and loved drama at school. One of her earliest roles was the angel Gabriel. Comments Julie, "I'd always been fascinated by things heavenly and glorious - that includes the music of J S Bach, beautiful sunsets and chocolate!"

At senior school Julie became thoroughly involved in musical productions and also co-led the Christian Union in the sixth form. She remembers, "I used to perform music fairly regularly with church youth group friend and guitarist Rich Roberts (who also, like me, wrote his own spiritual songs). Rich, my husband Malc and I are now in fellowship in a Pioneer-connected church in East Coker, Somerset."

After dropping out of her first degree course, getting married and having three children, Julie returned to study music at Roehampton Institute at the end of the 1980s. She continued her studies and gained an MA in Performance Studies specializing in jazz improvisation. She formed her first jazz band First Circle with trumpeter and fellow student Ray Butcher, pianist Paul Reeves and others performing songs from such jazz divas as Ella Fitzgerald, Sarah Vaughan and Billie Holliday. In the '90s Julie connected up with London-based JSN (Jazz Singers Network) and worked alongside such noted US jazz singers as Mark Murphy at London's 606 Jazz Club and Marion Montgomery at her home in the Windsor area. Remembers Julie, "Marion's close friend Rolf Harris dropped by at one stage to dispense advice on performance issues!"

Julie developed songwriting skills which resulted in her debut album 'Strange But True' at the end of 2004. Julie continues, "The album finally became a reality, thanks to Dartington-trained, Bristol-based guitarist Andy Christie who put together a much needed fresh, solid rhythm section, bassist Chris Harris and drummer Dave Sheen, both Exeter guys who regularly worked together. We recorded in Krazy Kat Studios in Exeter with sound engineer Rick Wolkers who has toured with rock giants Muse and is a wiz with Pro-tools! Trumpeter Ray Butcher came down all the way from Brum and produced some punchy brass arrangements, playing alongside sax player Ben Waghorn. One of the high points of the recording was the local grocer's shop selling great pasties and chocolate when the going got tough, plus copious amounts of decent ground coffee from the ever-in-use giant cafetiere!" Reviews were favourable with Peter Quinn of Jazzwise enthusing, "Dunn possesses a rich vocal timbre, big range and an idiosyncratic vibrato that is used to effect on end words. She can also conjure up some wonderful backing vocal arrangements..."

A collaboration with Johnny Dankworth sideman John Horler (described by The Observer jazz critic as "one of the finest jazz pianists that Britain has ever produced") in 2006 led to the development of the album 'What's It All About'. The album also features superb sax and clarinet work from Tony Coe. It was recorded at Clown's Pocket (the Kent studio run by Sax Appeal band leader and Jools Holland sideman Derek Nash). Julie remembers the recording, "One highlight was the frenetic pace of Cole Porter's fast swing tune 'It's All Right With Me'. It was done live in a couple of takes with the band and only a minimum rejigging/overdubbing of the vocal. It was an absolutely intoxicating adrenaline rush! And a fantastic number too - oh that I had Cole Porter's gift with a lyric and a tune! You need top musicians to carry this off at that pace. I also loved recording another Cole Porter song 'So In Love'. I remember seeing the US actor Kevin Kline convincingly playing the part of the anguished composer singing this freshly composed tune to his then dying wife in the film It's De-Lovely. I tried to bring the depth of emotion inherent in the composer's devotion into my rendition - it's such a sublimely beautiful love song. I seem to find myself being absolutely 'transported' even now, whenever I perform it."

Other standouts for Julie were the two solo vocal and guitar and vocal and piano pieces "Close Enough For Love" and "Alfie". "They are quite exquisite to perform due to the pared-down nature of the instrumentation and working with such superb artists such as Phil Lee on guitar and John Horler on piano. I also enjoyed doing the French lyric tune 'A l'enterrement de Sidney Bechet' (a lilting 12/8 blues-flavoured elegy to one of jazz's early pioneers, clarinettist Sidney Bechet). Not only was it great to perform with its subtlety, nuances and sultry exotic feel but Tony Coe's 'liquid mercury' soloing and delicately interweaving melodic interaction with the vocal line just leaves me breathless. I'm so delighted that Tony's long-term friend John Horler recommended Tony for this project - his playing is out of this world. . . Wonder who inspired that then? Must be the Almighty!"

When not touring Julie attends Mill Church in East Coker. She says, "I help in heading up the worship leading alongside one or two others (both guitarists) and my husband Malc is on the leadership - a team effort."

Julie speaks about the challenges of being a Christian working in the mainstream. She comments, "I'm so glad to have such a close mate and an utterly great jazz musician and Christian brother in Ray Butcher. We're both trying to make it in the mainstream jazz world which is both comforting and at the same time unnerving! Whenever/wherever we can, we've decided to try to open doors for each other - when one gets a good contact we share it with the other - people like gig and festival promoters for example, or touring/funding schemes that might be worth investigating. But it can be a bit of a slog. Having said that, one or two good contacts - especially linking up with more established artists as I've been fortunate enough to do on the new album project - can boost your credibility an awful lot.

"Both of us really appreciate working with top rate jazz musicians who also have beautiful spirits - people of integrity. But it's not always easy to discern who are the 'right' people to work with/get into partnership in a musical sense - but it makes such an incredible difference when the musicians you're playing with really listen to each other and don't let their egos get in the way of contributing to the ensemble's expression as a whole. Christians don't have the monopoly on that sort of behaviour, but it helps if the musician at least has an intelligent respect for others. It often seems that the guys/women who have 'made it' in some way, shape or form are less likely to be arrogant or exploit others on the way up than those similarly trying to make a success of their music. The competitive element is always going to be there and it's not all bad, but when you can let go of being obsessive about being successful and just strive to better yourself in perfecting your own art and where your jazz inclinations lead you hopefully the beauty and uniqueness of what you personally have to offer will shine through and inspire your audience. We've both been burnt by people who've exploited us - like so many creative people, especially artists and musicians in the past - and made some definite mistakes/gone down some blind alleyways during the years we've both been into jazz. Experience is a great teacher, and it's also good to know that just as 'Rome wasn't built in a day,' a Christian artist can have confidence in the Psalmist's words, 'I will make my plans Lord, but you direct my steps.'"

On Songs of Praise Jonathan Vera sang a piece "All that matters" I think he said it was by Judy Dunn! Looking for the music and words. Gladly pay for same! Can you help?
Sincerely Peter T. Jeffers (Christian musician piano accompanist etc!)