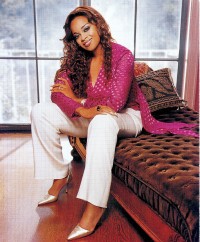 Of all the jaw-droppingly talented divas shining in the gospel firmament, one shines with particular brightness. Karen Clark Sheard has long been acknowledged as one of the finest singers in Christendom. Aretha Franklin saw some of herself in the singer when she picked Clark Sheard to sing on a CBS tribute in the early 1990s and more recently both Beyonce and Mariah Carey have listed Karen as a major vocal influence. Karen told gospelflava website what she thought of Beyonce's and Mariah's accolades, "It's so encouraging because those two ladies are REAL singers. These are just reminders that my light is shining. About a month ago, I was asked to be a part of a tribute to Mariah Carey, and not just to sing but to have a one-on-one session with her. As we were backstage talking she just began to cry and said to me, 'Sis Karen, you changed my life.' While we were talking I could literally feel the yearning inside of her to know Christ and we talked for a while. Yes they are mega-stars, but we have no clue what they have to go through on a personal level sometimes. I know I am often criticized for it, but God can trust me not to compromise, and he has really been using me to bring them in, so let the criticism keep coming. Leave my Judas alone, ok? Y'all ain't doin nothing but taking me to another level."

Karen Clark Sheard was born on 15th November, 1960 and is the youngest of six children, Leo, Jackie, Denise, Elbertina (better known as "Twinkie"), Dorinda and Karen, born to Pastor Elbert Clark and Dr Mattie Moss Clark, the pioneering Detroit-based gospel choir director. The Clark Sisters were of course to become legendary figures with such big hits as 'Is My Living In Vain' (1980), 'You Brought The Sunshine' (1982) and most recently their comeback album 'Live One Last Time'. In 1984 Karen wed John Drew Sheard, the senior pastor of Greater Emmanuel Institutional Church Of God In Christ in Detroit. They had two children, John Drew Sheard II and Kierra Valencia Sheard. The latter was of course to become a major gospel hitmaker in her own right as Kierra 'Kiki' Sheard.

In 1996 Karen was asked to be a member of the short lived Island Inspirational Allstars (a gospel music supergroup which Island Records hoped would break into the mainstream). However, despite the presence of Donald Lawrence, Hezekiah Walker and Kirk Franklin, the single "Don't Give Up" failed to register. Within a year Karen began her solo debut for Island, 'Finally Karen'. Produced by Donald Lawrence, Stanley Brown and J Moss, the studio half of the album was defiantly urban contemporary, such as Clark Sheard's duet with the mainstream's Faith Evans on the song "I'm Nothing Without You". The second half of the CD was recorded live at Bailey Cathedral Church Of God in Detroit for a Clark Sisters reunion on "Jesus Is A Love Song" and the show stopper, "The Will Of God" featuring a riff battle between Sheard and daughter Kiki. The album peaked at number two on Billboard's Gospel charts and sold over 400,000 units. But in one of those bizarre quirks of music industry fate, Island decided to close their urban division and dropped Clark Sheard from their roster.

In 2001, Karen suffered a tremendous setback when minor surgery derailed her health into a comatose state that left her debilitated with little expectation for full recovery. However, through the fervent prayers of the Christian around her Karen recovered. Clark Sheard resurfaced on Elektra Records with her '2nd Chance' album in 2002. The title song referred to her battle with illness. She said, "I had been so weak, both physically and vocally. I just thought I couldn't do it anymore, but my cousin, James Moss, brought me the music to '2nd Chance' and I literally had to walk out of the room. There was such a piercing in the music and a feeling of victory came over me. At that time, there were no words and I believe God had it set up that way so that the anointing on the music could inspire me to keep going." The project was clearly aimed at crossing over into the R&B charts, similar to what Yolanda Adams did with 'Open My Heart'. Guests on the PAJAM produced project included Mary Mary and Missy Elliott. Karen told Billboard at the time, "I would like to appeal to different audiences - to reach the world and a lot of young people who don't go to church." But as Bil Carpenter's Uncloudy Days: The Gospel Music Encyclopedia reported, "Although it peaked at number two on the Gospel Album sales chart, '2nd Chance' was not the huge seller Elektra anticipated. Gospel radio announcers took a cool hand to spinning the mechanical rhythms that didn't remind them of church at all." 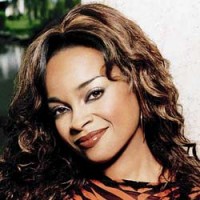 The 2003 follow up 'The Heavens Are Telling' was very much a return to the fiery live church sound of the Clark Sisters. On its release she spoke about her early reticence to sing without her accompanying sisters. "I will definitely admit that in the beginning of my solo career when I was on stage, I was very hesitant. But now, I've more confidence in me, since I've been doing ministry for a long time. I've gotten to the place where I can hold my own now. But, I would say I'm still searching for them, I miss them. It's like I'm out there alone. There's nothing like the connection we have onstage. When I'm by myself on stage, it's totally different. It's like something is missing. And I'm definitely looking forward to going back to having that connection again." In the same interview she spoke about the special anointing that God had placed on the Clark Sisters for singing and ministering. "I remember at the holy convocation; it was years ago. I think I was in middle school. And to see the faces, the mesmerised faces, while we were up singing; it had to be at least 15 thousand people. I began to think, 'Wow, is this a dream; am I fanaticising or what?' I would see groups like The Jacksons and The Pointer Sisters and think it would be great for us to be up in front of thousands of people like that. And I remember, in November (I cannot give the year), but I know I was probably around the age of 12. That's when I noticed God had placed something in our family, something that people were trying to duplicate, but it never could be duplicated. That's when I realized it was something he had instilled in us that we cannot stop. I don't care what happens. Even now, I've realised even when we try to stop ourselves and think maybe our time is up, I go back to thinking, 'If God had placed it in us in the beginning, as he did, then this is something that cannot be stopped.'"

The release of 'The Heavens Are Telling' came at an awkward time in Elektra Records' history as the company was being dissolved into Atlantic Records. So, despite containing the church-orientated gospel radio hit "You Are Welcome", the project sold even less than '2nd Chance'. In 2005 after a bidding war with several labels, Karen finally signed with Word Records. Said Karen, "You know, it's funny; the original person who brought me to Word [Desmond Pringle] and most of the staff that were there then are no longer with the label. I know it must be the Lord's doing, though. I'm just trusting in him as I learn the people around me. It has been a blessing at Word Records. There were several record companies who did want to sign me but I think a major factor for me was I wanted to reach a broader audience and even venture into the CCM market, and I think Word will do a good job at that."

For her Word debut, the live set released in 2006 'It's Not Over', hitmaking producers Aaron Lindsey and Israel Houghton were drafted in. Karen had long insisted that Donald Lawrence was her favourite producer so she admitted that it was difficult to work with someone else for the project. She said, "I know we will work together again, but for now I felt it was time for a change. I had become very inspired by the anointing on the lives of both Aaron Lindsey and Israel Houghton, so although it seemed like a risk, I decided it was now or never!" One of the most powerful songs on 'It's Not Over' is "Authority". She told an interviewer, "That's my weapon song. I use that one to fight with! Actually Aaron Lindsey did the music to the song and Israel and I did the lyrics, and when we turned it out as the finished product, I said 'My God'. I think that's one that the praise and worship teams in churches will really pick up and run with."

At her recent concerts Karen has been doing some serious preaching as well as singing. She told gospelflava, "You know, my mother was a preacher, and my grandmother too, so I believe what was instilled is just simply coming to fruition. I didn't chose, per se, to go into the ministry, but I knew it was time for me to minister the way God was calling for with authority - plus I didn't want him to whip me! I have been doing some preaching and speaking, even in standing alongside my husband, Pastor J Drew Sheard, but for the most part I leave that up to my sister Dorinda. I don't know how she does it, singing one night, preaching on another."

I love and honour karen clark sheard..she's such an influence in our history,wish could meet her an sing with her one day

Awesome singer and awesome person. i was watching her testimony online and it is amazing what she went through and how God brought her out. An inspiration!