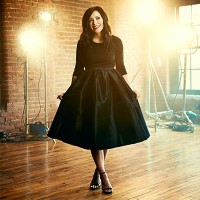 Although heavy with her first child, expected next month, Kari Jobe undertook a UK tour at the end of last year with fellow worshipper Matt Redman. Before the evening of worship at the Bethel Convention Centre, Halesowen, the singer, songwriter and worship leader was quizzed by Tony Cummings.

Tony: A lot has been happening in the Church over the last few years. What is your perspective on those changes?

Kari: A lot of it has happened because of worship - people coming hungry and wanting more of the presence of God. I'm 34, and I remember when I was young the Brownsville Revival in the States, then the Toronto Blessing happened - such a move of the Spirit - then it seemed like churches went in a different direction for a while. But it was good, because it made it healthy again. Everyone was focusing on the manifestation of the presence of God, and not just God, who he is and having relationship - wanting something, wanting gold-dust, these manifestations of the Spirit. I've watched church get to a healthy place in the last 15 years, and now there's a fresh move of the Spirit coming in. I think it's because people are hungry; we're now founded in the Word again, we're solid and secure in who Christ is, why we're called to be believers, the plan the Lord has. There's this hunger for more.

Tony: I've noticed worship songs have been a lot more Trinitarian - the whole of God, rather than some aspect.

Kari: That's very true: a lot about Jesus, the crucifixion, the story of why we're even believers - theologically sound songs.

Tony: In your times of ministry you sing many songs you have written but also many composed by others. Is there a tension in being a songwriter who also sings other people's songs?

Kari: Most of my favourite worship songs are not the ones I wrote. If a song helps bring an anointing or shift in a room, helps people say things, I never care how many I sing of other people's. If it does something to shift the atmosphere in my heart, I know it's going to do that for other people. I just love authentic anointing.

Tony: As you tour, are you consciously looking for new songs?

Kari: I'm always hungry for more worship because I wear out the songs that I love. Currently, I'm asking the Lord for new songs, to write new songs, because I have to do a new album; so I am more aware what's out there, what's going on. I don't mind recording other people's songs. I did not write "Revelation Song", but I'm very thankful for it.

Tony: Songs can circulate among churches without the media.

Kari: It's interesting, because you hear songs all the time - being a lover of worship - but there's very few songs that take off across the whole Church. You don't know which ones are going to do that; the ones that end up doing it, there's usually some really special story behind it. There wasn't an agenda for it to be a really famous song, it's just that someone penned something that was authentic and honest; the Lord was like, 'I want to send this around the world'.

Tony: Have you had one of your compositions go round the world yet?

Kari: I think "Forever" is doing that. It's the first time in my life; to help write a song that's done that is pretty cool.

Tony: Have you started to assemble songs for your new recording?