Tony Cummings reports on an Orlando-born pop artist with a heart for the hurting, KARYN WILLIAMS 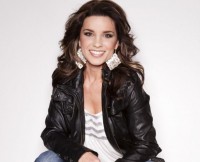 For a singer who has only recently released her debut album, Florida-born Karyn Williams has made a very high profile entrance into the music industry. The influential trade magazine Billboard named her as one of their Best Bets for 2012 while one critic called Karyn "this generation's Amy Grant". Karyn has already appeared on several national TV shows in the States while the reviews of her 'Only You' album have been very enthusiastic. Williams grew up listening to Christian artists Sandi Patty, Amy Grant, Michael W Smith and Steven Curtis Chapman. She said, "My dad introduced me to country music when I was in high school and I fell in love with the harmonies and the stories in those songs that were told by artists like the Judds, Martina McBride and Faith Hill, but Christian music is the music that has always moved my heart and made me want to use my voice to draw people closer to the Lord. I used to sit in my room for hours listening to the lyrics of songs that I loved. I guess I was studying songwriting before I realised it."

Williams grew up in an exceptionally large family. Her parents had five biological children and adopted 14 others from numerous countries, including Brazil, Korea, Romania and the Philippines. She said, "I didn't choose the adoption platform, adoption chose me and is a big part of my ministry and a big part of where my heart is. I've seen first hand the impact adoption has on families and lives. Because of my parent's willingness to say 'yes,' they changed our entire family, and they changed generations to come. They didn't just change my life, but they changed the lives of children that were born all over the world."

After graduating from the University of Florida with a degree in broadcast journalism, Karyn moved from Orlando to Nashville, Tennessee in 2007 to pursue a career in music. It was a challenging move to make. She told Today's Christian Music, "I stepped out on a huge leap of faith and moved to Nashville. I didn't know one person in the music industry, but I decided if it was sink or swim, then I was going to swim. On the day I drove to Nashville I prayed, 'Lord, I promise to walk through every door that you open no matter what.' I have kept that promise and he has been faithful in providing opportunities to share his name."

In 2009 Karyn wrote a book, The Takeaway, with her father. Two years later the singer/songwriter was signed to Inpop Records, the Brentwood-based label responsible for such acts as Newsboys, Mat Kearney and Jimmy Needham. Her album debut 'Only You' featured production from her songwriter husband Brian G White as well as Barry Weeks, Chris Bevins, Craig Swift and Keith Everett Smith. She said at the time of the album's release, "As an artist, I have dreamed of sharing my faith through my music and to be able to take the message of real hope to real people in the real world. God has given me the opportunity to partner with Inpop Records to do just that, and I am so grateful to them and to the team of people the Lord has put together to get these songs out there. From the label to all the radio stations that will play the songs, to the book stores and every media outlet that will carry it, it's a blessing to be part of the music that has played such an important role in shaping my walk with the Lord."

The project's first single, "Rest In The Hope" was written in tribute to her father, Pat Williams, founder and executive of pro basketball team Orlando Magic, as he faced a battle with cancer. That cancer is now in remission. Other songs on 'Only You' include "Every Good Thing" which is an infectious celebration of God's faithfulness and "Just May Be" that chronicles Williams' own personal experience with adoption ("You just may be the answer to a prayer/You just may be the only heaven someone will ever see"). The track from the album Cross Rhythms are currently playing is the infectious "Hey There".

Karyn has a particular heart to reach out and help those who are hurting. She spoke candidly about her own struggles. "I have definitely walked through times in my life when I couldn't see God, couldn't feel him, couldn't hear him. Sometimes you feel all alone and wonder if your prayers are bouncing off the ceiling and hitting you in the head. Let me encourage you with the words from 'Hey There' - 'He knows right where you are and what you're going through. He knows everything you feel. . .' During one particularly difficult season in my life when I was still living in Orlando, I was a wreck one day over a situation I was in. . .I mean a wreck. I was in the middle of crying my eyes out when I was overcome with the urge to get out my Bible and open to the beginning of the book of James. I started reading, 'Consider it pure joy, my brothers and sisters, whenever you face trials of many kinds, because you know that the testing of your faith produces perseverance.' Off to the side I had written in my Bible 'not if', as in when you face trials, not if. That was such a comfort to me that day realising that so many people before me have felt the same way and it's our tough times that shape us, strengthen us and teach us to lay it all down and let God be in charge.

"Not long after my dad's cancer diagnosis he said, 'I guess I had more to learn in this life and multiple myeloma is going to be my teacher.' I was floored. He was choosing to look at cancer as a learning experience? That's just crazy. Or is it? I heard Laura Story talking about her song 'Blessings' as a 'journey of redefining what blessings are in our lives.' We tend to think of ourselves as 'blessed' when things are going good in our lives. And when things aren't going as well, we question God and wonder what we've done wrong. If you're going through a tough situation right now, God is not punishing you. I believe he allows things to happen in our lives to shape us, and mould us into who he wants us to be. The key is understanding and accepting that nothing happens to us that isn't Father-filtered and he is right there with you through it all.

"So my advice to anyone who is hurting right now is this: Tomorrow morning take a big deep breath and then get up, suit up, show up, do the next right thing and trust God with the results. Your life is in his hands. He never promised us life would be easy, but he did promise us he'd walk with us through every single day. That's a promise I'm clinging to!"