There's nothing glamorous about the gritty ministry of KATO. Yet they've turned out a superlative album as Tony Cummings reports. 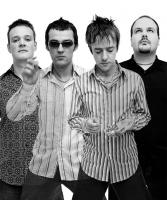 The theme of the new ICC album by Kato is survival. Few themes could be more appropriate for the Keith Ayling-led team of pop rockers. For Kato have circumnavigated a number of mountains and valleys to come back better, stronger and clearer in creative and spiritual focus than ever before. In fact, their new album 'Songs To Help You Survive' is already being heralded as not only the band's best in their six year existence, but one of the best pop rock albums ever to emerge from the British Christian scene. The critics, including Cross Rhythms, have swooned over its intricate guitar layers, its rhythmic thrust and Keith's lyrical intelligence. What is particularly heartening about the album's critical acclaim is that the album has stemmed not from a band pushing hard to "make it in the mainstream" but a band who've spent time listening to God to ensure they've correctly heard the Lord's specific call on their lives. In a rather stuffy office at Cross Rhythms, Stoke-on-Trent, Keith Ayling spoke about the pivotal period in 1995 shortly before Kato were formed. It was then that it dawned on the gifted singer/songwriter that maybe the dent he'd made in the UK scene (his earlier band K had played Greenbelt mainstage on four occasions) wasn't a stepping stone to mainstream success, but a preparation for a ministry with encouragement of Christians as its primary focus.

"When I started as a musician," said Keith, "I had that dream that God was going to make us a big band and we would break into the mainstream. We had so many setbacks I got to the point where I was asking God, 'Why? Am I misinterpreting what you're telling me to do?' I forced myself to take a break of six months. God said, 'Come back and form Kato.' He told us to be a band that encourages Christians, to be a band that resources youth workers, to be a band that encourages people to get out there and do what God has told them. It might be that he's telling some musicians to go and work in the mainstream but he wasn't telling me to do it. He WAS telling me to encourage people to break into those areas where God wanted them to be - which could be working for a financial institution, it could be working for W H Smith, it could be working for a Christian organisation. Our role as a band was to help people find God's personal vision. That's what God's told us and that's what we've tried to do ever since."
With this profoundly important, yet palpably "unsexy" vision, Kato have been tireless workers for Christ. Keith Ayling (vocals), Mick Buckley (guitar) and Rick Robinson (bass) conducted one of the biggest tours undertaken by any band in 2001 supporting their groundbreaking ICC debut 'Welcome To My World'. When their drummer Mike Simpson left for pastures new the band could have hit a crisis. But as anyone who's heard the exciting rhythm tracks on 'Songs To Help You Survive' will acknowledge, Kato have found a fine replacement in Maidstone-based Jon Howells. "He was completely thrown in the deep end," admitted Keith. "We auditioned four people in March. We explained to them we were about to record and tour the album, so these were the things they would need to commit to. Jon wasn't phased by it at all. He just did the audition and said, 'If God wants me in this band they're going to choose me and if not I'll do something else.' In retrospect, I'd already heard from God that Jon was the man and the auditions were testing that. His joining has made us a complete unit and the team is working better than ever. When Jon joined he came straight in to record the album. Because of that, Dave Lynch, the producer, felt he could do anything with the drums. So he really pushed Jon into doing some different things and using some loops, tuning the drums differently, just playing with sounds. So Dave was really happy that he'd got complete free reign to play with the drums as much as he wanted and Jon loved that because he came straight into a situation where he could play with sounds and do new things. It set the tone for the rest of the album really. 'Fearless' is representative of that because it's got an amazing drum track on it. We've experimented a lot with the sounds on this album and yet the overall sound sounds more like us than ever before."

Just as arresting on the new album were the breathtaking string parts which interweave beautifully with the dense soundscape of guitars and Keith's haunting vocals. "When we did 'Welcome To My World' we used Paul Heyman and his brother," remembered Keith. "They weren't available this time, Paul was ill, so we used Harry Napier who's from London and has got some Greenbelt connections. When we came to 'Welcome To My World' I had a lot of melodies that I wanted to incorporate as string parts, so the string part for 'Die For You' is a melody I'd put together with Rick on the bass. When we came to this one I didn't have any ideas for string parts. We left it to Dave. The track 'Don't Let Me Fall' is, in a way, the second part of 'Die For You' so I knew where that one was going to go. But a lot of the other songs like 'Skydiver', Dave just wrote all of the string parts and I was just in awe when they were being played. But on 'I Come Alive' I was tearing my hair out! I was saying, 'I don't like how this sounds.' And there was a drum part in there we didn't like. But when it all came together in the final mix it was exactly how I'd originally communicated to Dave I wanted it to be! But the process of getting to there was, for me, so painful. Situations like that show that you need to trust a producer 100 per cent - he might take different roads to get there but he got to the destination we wanted."

Many of the songs on the album speak directly to the spiritual battle we all undertake as we seek to live out our faith in a demanding, and often confusing, world. Keith commented on the 'survival' theme. "A few months previously the whole theme that was coming through to me was survival. A few years ago I half wrote a track called 'Song To Help You Survive'. We'd never recorded the song, it's been put on the shelf really, but the theme of that song and the whole thing of being a Christian and surviving in the age that we're in came back to me this year. There's a glut of TV programmes at the moment focussing on the whole survival thing. There's a lot we can take from that in terms of how we are as Christians trying to survive in a modern age. The way that communications have gone is completely changing the culture we live in and we've got to learn to communicate on a different level whether that's through emailing or texting. We've got to ask God how he wants us to present the Gospel in this kind of age. I really stuck out that I wanted to call the album 'Songs To Help You Survive'. At first ICC didn't like it, they wanted to go with 'Fearless' as the title, but eventually they let me go with 'Songs To Help You Survive'." 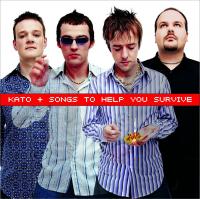 Kato are very much on the cutting edge of youth ministry. I asked Keith to comment on the seeming contradiction of the statistic of thousands of young people leaving the Church every month alongside the encouraging increase in young people attending the major Christian events. Responded Keith thoughtfully, "With things like Soul Survivor and Spring Harvest you are seeing bigger numbers. Whether those numbers are mirrored in many local churches I doubt. In general terms it's very hard work out there in the small towns and villages to build the youth work up. Kato love going to small towns and villages where normally bands never go. The youth workers welcome us with open arms and say things like, 'You're the first band ever to play this town.' What we find is they're so appreciative that we actually made the effort to go there even though we knew it would be a fairly small audience, because the impact you can have on that youth ministry is amazing. If we can go in and play to a small audience and one or two people become closer to God through the music or we speak to them afterwards and help them, we've done the job. We get so many emails from people who say they've changed direction, or they're going to change their job because God spoke to them that night or they're going to take a year out because God has told them to do that. To get those kind of reactions back after doing a gig is an incredible encouragement for us and it says to us we're in the right place."

Kato's achievement is exemplified in their SURVIVAL songs album. They have not just survived, they have cut and grafted a unique place in peoples hearts and minds. Their songs live and confirm our faith. They touch a human responce and lift us in times of weakness and strength. Their music is a qualification of what Christian contempory music is and should be.

For more on Kato visit the Kato artist profile