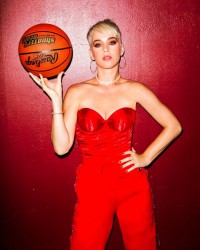 Pop star Katy Perry has had a long and sometimes painful spiritual and creative journey. Katy, who is the daughter of two Californian pastors, left home when she was 15 years old to pursue her music career. In 2000 she recorded an album of Christian songs under the name Katy Hudson. At the time of the release of the 'Katy Hudson' album by Red Hill Records, Cross Rhythms conducted an interview with the singer, then pitching for her first try at CCM fame.

She said, "I was one of those kids going to camp and every time there was an alter call I was there. I'm a pastor's kid so I grew up knowing about Christ and Christianity and stuff like that. I didn't actually make it my own until I was going through a process when I was 13. It's becoming a more personalised faith to me daily because I actually realised that my parents weren't my salvation and they weren't the ones that were going to be judged and just because they're Christians and pastors doesn't make me shiny and new. Salvation is for everyone but you have to make it a personal choice. I came to a realisation that I'm believing not because it's been thrown in my face all of these years. So basically I just have adopted it as my own faith and grown out of the mode of letting it be a family tradition. I knew that God had been knocking on the door for quite a while and God was the only one that truly understands me completely because I'm such an outcast and a kooky little, funky person."

As it turned out, the 'Katy Hudson' album didn't sell and Red Hill Records quickly went bust. Katy began working in the mainstream music world and, in 2006, met up with the manager who was to give her an entirely different pop music persona. In 2008, now rebranded Katy Perry, she landed her first pop hit with the song "I Kissed A Girl". A much publicised failed marriage to British comedian Russell Brand occurred while Katy's string of hits, like "Hot n Cold", "California Gurls", "Teenage Dream", "Fireworks" and "Last Friday Night (T.G.I.F.)", continued to flow.

But as CBN News recently reported, the more fame she won, the more she let go of her Christian faith. She told therapist Siri Singh that the inner battle between her true identity as Katheryn Hudson (her birth name) and her pop star identity as Katy Perry drove her to depression and suicide. "I so badly want to be Katheryn Hudson that I don't even want to look like Katy Perry anymore sometimes - and, like, that is a little bit of why I cut my hair because I really want to be my authentic self," she explained.

She said she struggled with a lot of shame during her low and suicidal points in her life. "I feel ashamed that I would have those thoughts, feel that low and that depressed," she said. Ultimately, she believes it was the grace of God that pulled her out of her depression. She even wrote a song about it. "I wrote that song 'By The Grace Of God' because I do believe in something much bigger than me and I call that God for me," she said. "I know that God has his hand on me, and I know sometimes I go through things and they're just too intense and I can't handle them and then he swoops in and he shows me that it's his grace that brings me through it."

Recently, Katy gave an interview to Vogue Australia. She said, "My mum has prayed for me my entire life, hoping I'd come back to God. I never left him, I was just a little bit secular, I was more materialistic and more career-driven. But now that I'm in my 30s, it's more about spirituality and heart wholeness." She continued, "I'm such a big fan of Pope Francis. It's a combination of compassion, humility, sternness and refusal. He is rebel - a rebel for Jesus."

Perry travelled to Rome last April to give a speech about the health benefits of mediation at a conference organised by the Pontifical Council for Culture. She took her mother, who was raised Catholic, and actor Orlando Bloom with her. "It started when we were on the Asia leg of the tour and I went to mass with my mum," the pop star said. "She hadn't sung those songs in 40 years and watching her made me cry. It's so beautiful and humbling to re-centre in a place where it's not about anything else but reconnecting with the divine."

Wow, I was surprise to hear that .!
Prase God ,God be the glory .