Keasha Beard: The Seattle-based rapper with an "on fire" EP 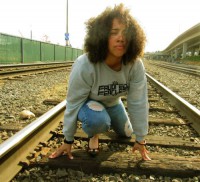 Seattle's Keasha Beard is one of the best of the new wave of female rappers to emerge in recent times. Three tracks, "Nectar (ftg SmileyD)", "Queenin' (ftg DiceGamble, BAngelique)" and "Vibe", from the clever and articulate flows on the six-song 'Different' EP have been chosen for the Cross Rhythms playlist.

Keasha's biography speaks about her "emerging from a past of addiction and darkness". After a dramatic conversion, Keasha began to use her rapping skills and in 2016 released the album 'Memoirs Of A Keasha'. That was followed by the mixtape 'Transform'. The mainstream crane/city website reviewed it enthusiastically. "At a time when we could all use some, Keasha Beard delivers a little well-timed faith with 'Transform'. This is a solid rap record with smart verses and deft production from Moshae Beats. These 15 tracks seek truth and God and demonstrate defiance against hardship. A lot of them are also damn catchy celebrations of positivity: like the second track that chants 'I MADE IT' as a mantra of certainty."

Two years later, Keasha released the album 'Soul Food'. PleasePassTheIndie website called it "a bountiful display of her ability to create meaningful songs" and particularly homed in on "Make It Count", where Keasha "sings and raps about getting the most out of life," and "My City Reigns" on which Keasha was joined by guests Rell Be Free and Mac Watters.

Speaking about her recordings, Keasha told Rap Remnant website: "I am very open and honest in my music. My music tells the story of my life, going all the way back to my first project - 'Memoirs Of A Keasha', which tells the story of who I was before God and how I came to know him. The 'Transform' mixtape explains what transformation looks like. 'Soul Food' explains the depths I had to reach in order to truly serve God and others. And now, with 'Different', you get to see the fruit of it all. Everything is Different."

With the release of 'Different', Keasha has now established a Seattle-based entertainment company, Favoured And Fearless, which will concentrate primarily on music but will take in other forms of media like the performing arts, theatre and books. There is a serious spiritual purpose behind all the singer/rapper's creative activity. She told Rap Remnant website recently, "I am a living witness of the Lord's grace and mercy. I get the privilege of knowing his love. It would be foolish not to share this with others. I want everyone to know this kind of relationship with the creator of the universe. Additionally, I know what it's like to feel broken and empty, so I want to do everything I can to represent God and his eternal freedom. I want to bring joy and hope to people."

And about the 'Different' EP, Keasha advised, "When listening to 'Different', be sure to keep a fire extinguisher! All of the tracks are on fire!"

Well... Id say Tony Cummings is a genius! Lol. Thank you for your love and support. You have mine too. Wherever I can help I will. God bless you.