Kendall Payne: The US singer/songwriter making waves in the UK

Brilliant performances at the 2000 Greenbelt Festival led sudden and unexpected acclaim for KENDALL PAYNE. On the eve of her return visit to Greenbelt, David Bain caught up with this most thought provoking of artists. 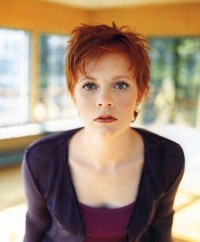 It is a "meet the press" day for American singer/songwriter Kendall Payne, organised by her new UK outlet Fierce! Distribution which takes me to the Regent Hall on Oxford Street. I begin by asking Kendall how she had enjoyed her pre-Greenbelt London club gig. "I enjoyed every moment, but it's the audience that counts. I'm happy with anyone that will come along and listen to me!"

We talk about how Kendall got started as a music artist. "I was born singing! From a young age I loved performing in front of people. At the age of 13 I saw this woman with an acoustic guitar and her husband playing bass and she'd kicked off her shoes, and they were just rocking out. I realised that this was what I wanted to do one day. So I started to learn the guitar and writing songs. Of course, there were a million horrible songs and every now and then there was a good one and it wasn't long before some of my friends said, 'Hey you're not bad at this, why don't you write some more and put some on a record or something?' At 15 I met a guy who owned a studio in California and he suggested that I put some tracks together. So we did and they got passed around and a producer friend at my church played the demo to someone at Warner Brothers Records and they loved it. It all took off from there."

"The 'Jordan's Sister' album title was kind of ironic because my older sister's name is Jordan, so in fact the title is me! But it goes deeper than that. I saw that a lot of the songs on the album dealt with those feelings of being just 'Jordan's sister' and that really I was on my own. I sometimes feel like I am only made important through someone else, and that's a very real feeling. I'm sure everyone has that at one point in their life: being the underdog. At the end of the day, I just want to be me. I haven't been completely on my own though! My parents have always stood by me in such an amazing way. They have tried to be at all my shows and they always listen to my music. My mum, in her wisdom, said to me once, that she wanted to see me succeed because I was good at what I do, without financial help from them so that I owned what I was doing with my music. So that's what I did and that has helped me to develop independently as a singer and songwriter."

In describing her own style of music Kendall struggles a bit and then says she'll go for the conventional reply, suggesting that the closest phrase possible to her genre would be "acoustic-rock-hop"! It is clear though that she draws on many musical influences. "Being a young artist, at the moment," Kendall explains, "is unique, because of the CCM heritage that many musicians, including myself, have. We've all grown up on dc Talk and Amy Grant, to name a few!" I mention that she has been compared to Alanis Morisette and wonder whether that bothers her in any way. She replies, "I think comparisons for any artist are inevitable. I do it to other bands and singers all the time. It's simply a way of describing how someone sounds."

For a new artist, Kendall Payne has had an extremely successful start. The first track on the album, "Closer To Myself", was featured on the soundtrack of the movie Never Been Kissed. The same track, and some of the others on the album, are also on soundtracks to other movies and TV shows. She also was the winner of the Modern Rock/Alternative category at this year's Dove Awards. On the topic of the Doves, Kendall points out that for her "it's not about the awards, and the pat on the back, but I did enjoy the feeling of being recognised. I think all artists love to be seen as good! I went home the next day and took the garbage out, so I am still a normal person, it hasn't changed me. I use it as the doorstop for my front door now!"

Going back to the album we talk about some of the tracks. "There are definitely some fun songs, which work well live, like 'Supermodel', which always gets a good reaction. The song 'Formerly Known As' is really powerful. I find that every time that I sing it live, a lot of emotion flows out from me. 'Hollywood' is a battle cry song. I live in Hollywood and it always seems like it is sitting right on top of me. I don't think there is a greater force that impacts the world more so than the force of Hollywood. There is so much hype coming from there, with their definitions of what is cool and what isn't. So the song is an anthem saying that I am not backing down to be something that Hollywood wants me to be. 'Fatherless At 14' was written for a little girl in the youth group that I grew up in. Her dad was at her younger brother's football match and he was not feeling too good and so he went to rest by a tree. He simply lay down and died. He had no medical history, so it was quite a shock and very unexpected. I got a phone call, asking me to come over and see her, and I spent some time with her, just holding her while she cried for her daddy. The song came to me soon after and is written from the father's perspective, describing what he would have wanted to say to his little girl had he had the opportunity."

Digging a little deeper, I try to find out more about what inspires these songs, other than personal experiences. "My inspiration for the songs I write comes from how I am feeling." Kendall explains, "It's how I have always written songs and I'm not even sure what comes first, the lyrics or the chords! Basically, when I write lyrics, I call out to God saying, 'I'm here, to be raw before you, and I'm here, for you to change and use me.' A few songs write themselves, but most of the time I try and let the song express the idea that God has given me to get across.

It seems that many of the songs on the album work well for both the Christian market and the mainstream. "My heart is to be a mainstream artist," Kendall stresses. "We all have our buckets of water and it's your choice whether you want to take yours and pour it out in the desert or in the ocean. And I believe that God wants me to take my bucket and pour it out in the desert, you know, take myself to the people that don't have water. Yes, I'm thankful for people that poured their bucket back into the ocean, because it inspired me, but as for me and my bucket, we want to go to the desert. Being in the Christian market, at the moment, is a little confusing for me, but definitely rewarding, comfortable and enjoyable."

Talking about how it has been since the initial release of 'Jordan's Sister', a few years ago, and the present time with the re-release, we touch on some of the difficulties. I ask Kendall how she copes with being in the spotlight when things go pear-shaped. Her answer is simple: "You find out what you are made of in those times and, of course, I usually end up crying out to God, asking him to help me out, because I can't do it on my own."

As we are drawn to a hurried close by the arrival of the next interviewer, Kendall lays out her future vision as an artist. "My plan is to work at this 100%. This is my contract with God and he might have other plans for me, I just don't know. God has plans and desires, but we don't just sit around and wait for everything to fall into our laps and so I'm leaving it all open to change. I think God is honoured when we speak out our dreams. And my dream is to make records for the next 10 years, followed by hopefully finding a husband and having children. That certainly is the most amazing calling of all: God entrusting us with the raising of real lives."