With their debut album for Alliance Music in the shops now and a major tour with Kato modern rock band KINDLE are well set up. The band's lead singer spoke to Helen Knight. 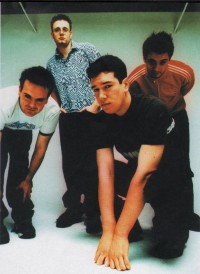 Few bands can claim that their second ever gig was before 6,000. But things have fallen into place for Kindle and continue to do so. A 20-date tour with Kato, a gig with The Tribe at Shepherds Bush Empire in March and most importantly the release of their album 'Screaming Serenades' all point to a glowing future for the band. It's also a busy time personally with Simon Parkin's wedding and the impending birth of Dan Boreham's first child.

It all started back in early 2000 when Dan Boreham and Simon Parkin decided to forge a working relationship as co-writers. Andy Harsant from Alliance Music already had his eye on Simon's vocal talent. The composer needed lyrical inspiration - enter Dan. The pair then combined forces with bassist Ed Hawkins and drummer Mike Randon and Kindle took their first breath.

Their diverse experience in the industry as session artists, classical musicians and worship leaders have provided them with all the tools necessary for a great band. But put the likes of Alliance Music and mainstream programmer Simon Hill behind them and you have a powerful ensemble.

In September 2000, London Arena was the venue for their second ever live performance in front of an audience of 6,000 at the annual Methodist MAYC event - a feat for seasoned artists let alone a band that started only months before.

"To be honest it was great, but a bit surreal with that massive amount of people. It is one of those things you don't take in because a lot of the time you are concentrating on what you are actually doing. I mean you just look out and see faces and you think, 'Crumbs, this is amazing!'," explains Dan.

The band began recording with an EP, 'Prototype', which gained favourable reviews but it took six solid weeks in Chapel Lane Studios in Hereford, with Andy Harsant producing, for their debut album to emerge. 'Screaming Serenades' is certainly an apt title for their debut, which is a fusion of spirited music with infectious drum loops over which their honest yet compelling lyrics transcend.

The future for the band is evolving at an incredible rate and Ed and Simon are set to move down to the South coast to be near Mike and Dan. They already have another 12 songs itching to be recorded and if the buzz about this band continues, the crowds will be eager to hear what they have to offer. God is clearly the momentum behind the band and as Dan says, "It has really flown, God has done amazing things with us and it has happened very fast, but we have worked really hard for it. What I like about the album is that it leaves a lot of space for us to go stylistically."

Honesty and humility is very important to the band to ensure that their foundation is rooted firmly in what is real, "Otherwise you can lose a sense of perspective and things become distorted," explains Dan. "Being in a band is almost like being in an alternative reality because you are not really in the real world as such with all four of you tucked away on a tour bus, you get off the tour bus, you do a gig, you meet a lot of people but it is not always on a personal level. You need people around you who keep your feet on the ground and who can challenge you to motivate you in the right direction."

As a band their ambition is simply and decisively to follow God's lead and although Kindle feel that he is placing them into the Christian scene at the moment they want the band to grow "organically", whether that is in CCM or mainstream. Yet whatever the stage they have a clear sense of responsibility to God and to their audience. Says Dan, "I think what everyone does in Christian music is evangelism, whether that be worship music or what we are doing. We are all trying to convey a sense of God and that there is something else for life. Being put on stage and being in front of people is a big responsibility and we certainly don't take that lightly. We know God has put us in a position where people are going to watch what we do and how we speak and what we talk about and we understand that.

The opinions expressed in this article are not necessarily those held by Cross Rhythms. Any expressed views were accurate at the time of publishing but may or may not reflect the views of the individuals concerned at a later date.
About Helen Knight
Helen Knight is a Bristol-based journalist who is the latest to join the expanding Cross Rhythms media team.

I came accross Kindle's 2002 Screaming serenades album at Wesley Owen in 2008 and bought it for Â£1. I found Kindle ok as an artist with tracks that are listenable such as "Little bit of your love" and "Days like these" .I cannot help but find Kindle's vocal style rather amusing but their style grows on you. Unfortunately there is not much on the internet about them and even Kindles website www.kindle.tv no longer exists and you only find links to Amazon Kindle. It seems like Kindle are no longer about but you may come across a copy of Kindles 12 track album Screaming Serenades at CLC or Wesley Owen.

For more on Kindle visit the Kindle artist profile