Their albums 'Out Of The Silent Planet' and 'Gretchen Goes To Nebraska' have met with huge critical acclaim stateside for KING'S X. Dave Caughey caught up with the band. 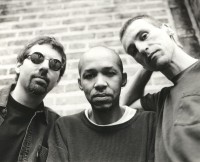 It would not be far from the truth to say that the majority of people who listen to Christian music have never heard of King's X. However those of you who are regular readers of magazines such as Kerrang! could scarcely avoid knowing something about them.

I first came across the band through an advertisement for their 'Out Of The Silent Planet' LP which quoted a parallel with U2. Overcome by curiosity I bought the album. It still is one of the most spiritual I have ever heard. Back then it mystified me why the Christian world had never embraced this band, who cut their musical teeth playing with the likes of Phil Keaggy and Servant, and whose beliefs were flowing out of their music in a refreshingly honest manner.

For those who are unfamiliar with the band they began around 10 years ago in Texas where they had a tough time getting noticed. That was until they managed to get signed to Megaforce/Atlantic Records. The rest, as they say, is history. Their debut album 'Out Of The Silent Planet' was released in early 1988 gaining rave reviews from all quarters, and clinching the No.1 spot in the Kerrang! writers' album of the year chart. 1989 saw the release of the band's second opus 'Gretchen Goes To Nebraska' which again caused the critics to drool, and managed the No. three spot in the Kerrang! writers' chart.

Both musically and spiritually King's X have been a huge inspiration in my own life; therefore it was with great pleasure that I undertook the task of interviewing the band's drummer Jerry Gaskill after their recent Belfast show.

Something, which to me defies explanation, is the fact that many people doubt a band's faith because they do not mention God in all of their songs. How does the band react to such a mentality?

"I think it's important for anybody to talk to the person, or go right to the source of what they are speaking about before they make judgements, but I'm not going to judge them."

The band members have all in the past been heavily involved in the Christian music subculture, as is evidenced on US artist Morgan Cryar' s' Fuel On The Fire' album which features material written by the members of King's X, most notably 'Pray In The USA', which was co-written by the band's guitarist Ty Tabor. Looking back on that period of time, and now viewing the Christian music scene from the outside as it were, do they see it achieving anything?

"I guess that there are aspect of it that are worthwhile, and there are probably aspects that aren't, just like in anything. For me to say in a few minutes the way I feel would sound like I'm coming down on people, or saying don't do this or don't do that, which I don't want to do. I've seen the Christian industry first hand, and have even been involved in it. T-Bone Burnett once said, Jesus said to be in the world, but not of it. But the Christian music business is of the world, but not in it. "I believe the Christian industry is just that. It is people doing what they feel they are supposed to do rather than what they feel to do, which is kind of sad."

Despite this, is there anyone in Christian music that King's X admire?

"I admire Phil Keaggy, I have always thought that Phil was just a phenomenal guitar player. As a matter of fact Doug (King's X bass player) used to be in a band with him, that's how we met. I think that he tones himself down a bit for the Christian industry. I don't know if he feels as free as he can because he's in that scene. "I like the guys in Petra, they 're nice guys. I have nothing bad to say about them. I don't really have much to say about Stryper. I remember the first time I saw them live, I thought it was incredible, I thought, 'this is really something'. They are who they are, they are doing what they feel they have to do. I've never even talked to those guys, so I can only speak from what I've seen of them. They're a good band."

King's X appear to have succeeded in bringing the Christian message, without being given a Christian tag. How then from their own experience can a Christian be most effective in society?

"I think just by being themselves, by being honest rather than trying to put a guise of Jesus or Christianity on top of themselves."

One accusation, which has constantly been levelled at the band, is that they are reluctant to talk about their faith for the fear of commercial suicide.