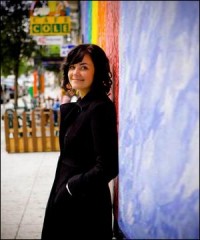 Few singers have made such an immediate impact on Cross Rhythms as Jesus Culture-linked singer/songwriter Kristene DiMarco. Both her albums, 2008's 'Those Who Dream' (released under the name Kristene Mueller) and 2012's 'Safe Place', have received extensive airplay and both have been given glowing reviews by the CR review team. Clearly an interview with this gifted singer, songwriter and worship leader was overdue. We began by asking the lady to give us a bit of her background story.

"I was born on January 28th 1985 in Niagara Falls, New York, about a five minute drive from the actual Niagara Falls. It's a beautiful place and generations of my family grew up there. My mom got saved when she was 16 and my dad got saved when he was 13 so I grew up in a home that loved Jesus. My earliest musical experience I can remember was when I was five. I was chosen to sing in our church musical, I was terrified to say any lines in the play but I was absolutely fearless when it came to singing, it was the dream in my little girl heart. I said the sinners prayer at three years old and then I said it five more times in case God didn't hear me the first time. I was always hungry for God growing up but I can't say that I truly knew, without a doubt, that he was real until I was 21 years old."

When asked whether she had recorded anything prior to 'Those Who Dream' it brought forth an unexpected answer from Kristene. "I want to say no but that would be a lie! I recorded a little album called 'Just A Worshiper' when I was 18 and also 'Grace' when I was 20. Both were recorded pretty poorly." She laughed, "Hopefully no one will ever find them."

By the mid-2000s the world Church was becoming aware of the powerful things that God was doing in worship music through the Bethel Church in Redding, California. Kristene enrolled at the Bethel School of Ministry. It was in Redding that she met Jordan DiMarco. Kristene remembered, "I thought he was the best looking guy I'd ever seen. We officially met in a Starbucks where he told me that God told him my husband was praying for me and to not lose hope. I honestly didn't really take the word to heart but a year later we found ourselves dating and six months later were married."

Kristene's first album released through Jesus Culture Music, 'Those Who Dream', was issued in 2008. The singer/songwriter remembered, "It was recorded in a basement in the middle of Redding heat so there was a lot of sweating. I'd say the biggest thing for me was watching God take these songs I wrote thinking no one would ever hear them and realising how tremendous the faithfulness of Jesus is. I realised that all I walked through to pen these songs would not be in vain, they were meant for much more people than just me."

Two songs from the superlative 'Those Who Dream', "St Francis" and "Trust", became Cross Rhythms turntable hits. Kristene spoke about their genesis. "'St Francis' is a song about San Francisco. I lived there for three years and was a part of a house of prayer. I wrote the song as a song of hope over the church in that city. 'Trust' I wrote during a very confusing time of my life. I had no peace about a relationship I was in, so in order to maintain the relationship I had to keep lying to myself that everything was okay. In the process I began to feel lost and as if everything had gone cold, it was so hard to feel anything good. I went for a walk one night to see the ocean and to clear my head. I cried out to God as I sat on a rock and all I heard was, 'I've got you'. It was all I needed and I ended the relationship and began to feel peace again."

Kristene admitted that the recording of 'Safe Place' was "a tough process." She explained, "The first album was so simple because I had no expectations from people around it. 'Safe Place' was different, and I over thought the album a lot before I actually even started. God taught me through this album to love what I write no matter what. He taught me that writing from a place of sorrow is actually less powerful than writing from a place of joy and thanksgiving. 'Safe Place' came out of a joyful time and I finished it right before my daughter was born. I'd say that lyrically the two strongest songs on the album are 'Hope' and 'Deanna's Song'."

Though not a member of Jesus Culture, Kristene has deep connections with the Redding-based ministry. She explained, "I contribute a bit. I'm not a part of the band but I'm on their music label along with the Torwalts and Derek Johnson. We all champion one another and support each other. Banning Leibscher [director of Jesus Culture Conferences] has opened up amazing doors for me and believes in my gift and voice more than anyone. I do about three events with them a year."

Does Kristene feel under any pressure being something of "a professional worshipper"? She responded, "It's sobering, I have to be more mindful of my actions and words. They carry more weight than they did before. Worship is still worship to me and I'm so glad it hasn't turned into a job in my heart. I try to approach every set with an expectation that God will show up and make wrong things right and bring dead things to life."

Motherhood has made a huge impact on the singer/songwriter. Said Kristene, "My daughter Lorelai Praise is just about two years old and my absolute joy. Being her mom has changed the way I see everything. My worship leading is even different, I find myself way more patient with people and it feels like my heart grew 10 more sizes. Lorelai loves to dance and worship, draw, watch the show Wipeout and laugh, sing, play with rocks and read books. Pretty much everything she does makes me proud and I love her so much."

I am going through a difficult time and find comfort in listening to your songs especially It Is Well.
Do you have a piano song book for sale?

I never heard of Kristene or her music until a few weeks ago, just days after my 32 year old son died in prison for a crime he did not commit. The Lord led me to YouTube to listen to Christian music in the depths of my grief and inspired me to look for the song âIt is well with my soulâ...and there she was.

I now know Godâs message to me through her song was Him letting me know âIt is wellâ with Ryanâs soul, as he came to know Godâs love, mercy, and salvivic forgiveness in the bowels of hell on earth. Thank you Kristene for being a willing instrument of Godâs healing touch

Just heard the song "It is Well" this week at a celebration of life for a 1 year old who was tragically shot and killed. The song made me feel inspired to always keep my eyes on Him. It is well.

I just want to thank Kristene for using the gift that God gave her. I love, love, love worship music and yours really ministers to my heart. I find it brings me into a deeper relationship with God. It makes me to fall in love with Him more. Please keep writing the songs God gives you. Your a blessing to the body of Christ!
Blessings to you and your loved ones.
David

I just want to thank Kristene for using the gift that God gave her. I love, love, love worship music and yours really ministers to my heart. I find it brings me into a deeper relationship with God. It makes me to fall in love with Him more. Please keep writing the songs God gives you. Your a blessing to the body of Christ!
Blessings to you and your loved ones.
David

I really like it that Kristine Dimarco's song is a rendition from a a very old song by Paul Spafford "It is well with my soul" The Chorus! and yet she has brought it alive again with Gods anointing and some special words & Lyrics. Thankyou thankyou oh so much and thankyou to our creator at this time as my wife who is under going cancer treatment find this song so therapeutic.

I am slowly emerging from a very hard place; a wilderness in many ways for the past seven years. I am a worshipper and your voice and music, filled and empowered by the Holy Ghost, are helping me to draw closer to Him and His marvelous Light. Grateful for your gift. I was also born on January 28... in the year 1950. God holds us in the palm of His hand.

So many korean love her song.
"IT IS WELL" is wonderful song.
Lost sunday mornimg, my grandmother went in god.
With "It is well", I am missing my grandmother.
Thanks for beautiful song.

Kristene is my oldest of 4 wonderful daughters. I love her music, not just because shes my daughter but because they have inspired me. After spending my whole life in the Niagara Falls New York area, we finally moved 2,700 miles away to Redding California. The lyrics of her songs on her new album really inspired me to keep moving forward. Also, I laughed when she said she hopes no one ever see's her old CD's but I kept copies of them in hopes that she re-records them some day. Glad your enjoying her music! Blessings Doug

What a beautiful note about your daughter. I love witnessing such interactions, because they remind me of God's love. Amen. You are a witness to me.