Land: A song-by-song rundown of their 'Point Me To The Skies' album 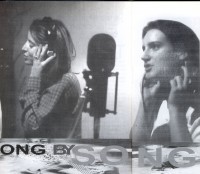 "Silver And Gold"
A meditation based on Proverbs 3. "A perfect way to start an album," says our good friend Dougie Adam. My wife Lynne and I had invested pretty much all our savings and pensions into this album. My work contract had expired at the end of 1998, after recording the album, and we were working out how much we had left to live on. Suddenly, the office rang asking if I would renew my contract for another year. We pushed our calculations aside and praised God for his provision and timing. It sounds crazy but I guess sometimes you've got to get crazy for God. We have, as a result, ended up with an amazing album and more blessings, and troubles!, than we could ever have imagined.

"Have Mercy"
A petition based on Genesis 18:16-33. Eddy's drums come in like thunder and make the song so dynamic. The lyrics are based on Abraham's plea to God. It's a prayer for Israel - the 'grains of sand' - but it's also a prayer for everyone. The guitar and oboe break have a real Hebrew feel. Someone said there are too many "have mercys". I think you can't have enough.

"Whatever Is"
A meditation based on Philippians 4:8. This track came to me in a dream. I dreamt of a gospel choir singing the song. I woke up and croaked the song into the tape recorder in the kitchen. 12 months later, I'm in Castle Sound Studios watching a gospel choir walk in - along with some pals - and sing the song with us. Amazing! Watching everybody's faces during the playback was very special. For me it's the best track on the album - really uplifting. There are so many bad things in the world, it's good to focus your time on good things.

"The Same Sun"
A lush acoustic track. This song can be about the Lord, or an absent loved one here on earth or in heaven. I wrote it for Lynne. It's about the bond we have on a spiritual level through Christ. Even if all modern forms of communication fail we still are 'closer when we pray.' It's also about communication with God. Even though we can't see him we can still feel his presence. The orchestral arrangement by Calum is marvellous and Shirley-Anne's vocals are so heartfelt.

"Broken"
A petition for the broken people. A very hard lyric to sing because of its depth of feeling. Diane gives a wonderful, deeply emotive performance and Yvonne's piano playing is simply beautiful. The line 'wishing they'd not been born' comes from the film It's A Wonderful Life. The lyrics have a healing quality and each verse has an optimistic ending. The 'cry out his name' in the bridge is a reference to the promise that "all who call on the name of the Lord will be saved". The powers that be are forcing a lot of stress on people and it is the Church's responsibility to minister to these people. Let's not miss out!

"Little Symphony"
An instrumental tribute to all the musicians and singers who worked on this album. At Greenbelt 98, Mike Yaconelli described the Church as an "incredible symphony". I see us as a little symphony working together with a mystical unity that only God can provide.

"In The Company Of Angels"
This song was inspired by an angel experience documented in Hope Price's book Angels. It occurred at Spring Harvest when several people hearer angelic voices singing along with the congregation. The lyrics express the mystery that we are not alone when we sing to the Lord. I also wanted to differentiate a scriptural view of angels from the secular view expressed in movies such as City Of Angels/Wings of Desire. There are some very touching moments in these movies but what may not be appreciated is that the Meg Ryan's character actually falls in love with a fallen angel - therefore a demon. We want to point out that we are singing about God's angels who are full of reverence for the Lord.

"My Heart Is Aching"
A plea to God based on Psalm 119:20. The lyrics came from a poem I wrote on New Year's Eve 1997 after a turbulent year. I guess most people have felt like this sometime in their lives.
John's guitar solo at the end is just great.

"Taking Jericho"
As Yvonne said, "This song is so not about Jericho the town." It tells the story of Rahab the prostitute. It's a heroine's song - a song for women but also for everyone. It's about the Jerichos in our lives, the stubborn sins in our hearts. The third verse was written in the studio. Many people were praying for us and this verse was God-given. The ending is an awesome line from Joshua to his tribes: "Consecrate yourselves for tomorrow God will do amazing things." Amen.

"Life Never Ends"
Based on Psalm 133:3, this is a celebration of the eternal- life given to us through Jesus and a meditation on the Trinity. The title originated from a line in a Mark Hollis song. The track was meant to be a percussion-fest and Wilf did such a wonderful job. It starts with an electronic feel but changes to real instruments played by real people! The track really cooks at the end and Paul's bass line is a classic.

'Tears No More"
A meditation based on Revelation 21:3-4. This is a reprise from our last album and we had started to slow it down live and make it more thoughtful. I added lyrics to the middle section which expresses the hope we have in Christ for our eternal future. The accappella vocals at the end are an eye opener.

"Abide With Me"
The title of the album, 'Point Me To The Skies', is a line from this hymn. Long after deciding on the title I was watching the Rich Mullins, tribute video the morning of our first day in the studio and I was floored by what I saw - it was the last picture taken of Rich where he is standing on a hill top, arms slightly raised, pointing like an arrow to the skies. It was as if we were being told "It's okay guys, these ideas aren't your own. You're not in control, God is." We asked Steve Butler to play piano on this track and he said jokingly, "I don't do hymns!" He certainly did a marvellous performance on this one.

For more on Land visit the Land artist profile