Lara Landon: An exceptional pop talent with a heart for Haiti 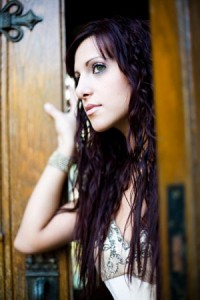 While the music industry continues to wobble, even big stars are finding it difficult to keep the engagement diary full. But this isn't the case with Nashville-based independent artist Lara Landon. In 2011 Lara has already been featured on two CDs, is touring heavily and is set to make her feature film debut. She said, "This has been an amazing year of new opportunities and doors opening for me. It's really a dream come true and I'm trying my best to be a good steward of the opportunities I now have to share God's love through my music and through my non-profit work."

The singer, songwriter, pianist has a fascinating background. Born to an Arabian father and a Sicilian mother, opportunity knocked for Lara when at age nine she landed the leading role in the popular musical Annie. Years of theatre followed. Lara studied the music business at Nashville's Belmont University. She told Cross Rhythms. "I loved Belmont and I am glad I went because it gave me a footing in Nashville. But the Music Business classes are so different to actually making connections. They don't tell you how to branch out or what to do in a lunch meeting. It's not practical; it was about looking over contracts. I wouldn't do that anyway because I would ask a lawyer to look at it. I liked Belmont, but the classes didn't really prepare me for the real world."

The real world came in a rush when Lara left Belmont and joined the hundreds of other young hopefuls struggling to get industry attention in an overcrowded music scene. After two years of playing writers rounds, open mic nights and contacting every manager and record label she could think of Lara got signed to Bema Media. She recalled how it came about. "There was a band called Mikeschair that was getting really big around campus. I asked the guys who their manager was and they told me about Jeremy Lee, who manages and is married to Plumb. I called him out of the blue and asked if I could come to his office to pick his brain. I was really nervous and scared meeting a big time manager, but I had the courage to tell him I had a show coming up downtown and asked him to come see me."

Lee and his pregnant wife caught Landon perform at an intimate writers night and were impressed. A few weeks later in that same type of setting, the couple brought record exec Robert Beeson, who was similarly gripped by the singer/songwriter. She was signed to Beeson's company and soon Landon found herself in the studio with legendary producer Michael Omartian (Amy Grant, Chicago, Rod Stewart, Whitney Houston), who began the 'Beloved' recording process. Said Lara, "Michael puts you at ease immediately and felt more like a dad than a producer, often comparing me to his daughter, which made the sessions feel really special since the beginning." 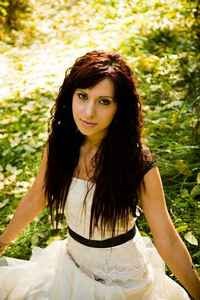 Lara's Omartian-produced 'Beloved' album gained her rave reviews. Lydia Akinola of Christian Manifesto wrote "the infusion of sounds old and new create something spectacular" while Jen Rose in Jesusfreakhideout enthused "the real star of this album is Landon's voice, part soft-spoken songstress, part soulful, soaring passion." A single from 'Beloved', "Closer" was on Billboard's Top 50 AC chart for six months while another track, "For The First Time", made it to the Cross Rhythms playlist.

In 2010 Lara and her sister Laila Mickelwort formed New Reality International, a non-profit organisation dedicated to helping those who are victims of extreme poverty, disease and injustice access free healthcare and vocational training. Just two months prior to the devastating earthquake in Haiti, Landon spent a few weeks there assisting in ongoing efforts to bring medical aid to a country in desperate need. Said Lara, "During my previous travels to Haiti, I realised what a wonderful country it has the potential to be. The people are so full of life and beauty. The children there truly stole my heart and when I saw the recent re-devastation of the country, I knew that God had been preparing me to respond through our organisation NRI. We are dedicated to helping Haiti recover and rebuild. When the world's attention has faded away we want to still be there making a difference in their lives. I feel very tied to this place now."

Recently Lara, along with other artists like Michael W Smith, contributed her vocal talents to the "Come Together Now" charity single and a various artists album 'Haiti: Unto The Least Of Those', both to raise funds for the suffering of Haiti. Now an independent artist Lara has released the EP 'Love/Majestic'. It was produced by Mitch Dane. Said Lara, "Mitch produced Dorothy Clay and lots of other Christian acts whose music I respect. I met him a few years ago and got in touch when it was time to do an album. I really liked his vision for the songs, and just got on with it. We had some great Nashville players on it and beamed out five records in two weeks. I am really happy with it."

But why an EP and not a full album? "I'm not with the label any more, I'm doing my own thing and it's hard to get together all the resources you need for a whole album. I think that people have a short attention span these days, and so if you give them your five best songs, people might appreciate it more than an album with filler songs. Not that I ever write filler songs! I write hundreds, so I always hope that by the time you get down to about 12 they will be good songs."

One of the best tracks on 'Love/Majestic' is "I See God In You". Lara spoke about the song's genesis. "I remember I was singing one time and my friend came up to me, gave me a big hug and said, 'I see God in you'. That was such a compliment, and since then I have always had that phrase in my head and recognise God in so many people, my friends, family or others. So that's what inspired the song."

Another attention-grabbing track is "Shrouded In Mystery" which comes with lashings of electronic effects on the voice. Explained Lara, "The song is really about how I am in hot pursuit of finding out more about Jesus who is a mystery to me. It was not like the mix was a shock for me. I was there with him, sitting in the studio pretty much the whole time. It was collaboration where Mitch would ask what I thought. So we thought it would be cool to do it!"

Lara has also provided the vocals for a worship/electronica album 'New Frontiers' in the DreamLab series. Lara had previously provided some vocals for DreamLab's 'Worship Revolutions' album. Explained 'New Frontiers' producer Paul Buono, "DJ Magellan and Lara had such a great experience doing that track together that when it came time for him to wrok on his project, Magellan's first thought was to ask Lara to be a part of it. She was such a perfect fit for the 'New Frontiers' project. I love the emotionality of her voice and her creative expression. She brought a tremendous amount of energy and determined focus, which allowed us to push each other toward some new territory, hence the project's title. Lara truly believes everything she sings and you can hear that passion in her performances."

Lara is now working on her next full album. She enthused, "It's called 'Overcome' and I have been playing it on the road. I have been getting such a powerful response and I know that is what God wants to release. We were all overcome and I'm excited about that message."

As well as all her recording and touring Lara has also found time to make her feature film debut. She will appear in the upcoming Frontier Boys, which stars multi-platinum country artist Big Kenny (Big & Rich) and Christian music hitmaker Rebecca St James.

Whatever her future in movies, one thing seems certain. Her rich, expressive vocals make her a natural for music success. The New Release Tuesday website recently wrote, "Landon has the talent, maturity and sound to make a big splash in the CCM market as well as the mainstream." It's hard to argue with that.

I have just found Lara on Facebook through a friend and must say that her voice is so richly soulful and beautiful.
Her passion for serving others and using her God given talent of singing to bless us is great to see and also to hear of in a woman so young.
I pray that God can use her through song, movies and any other outlet He so deems for many years to come.

I really love that article so much keep up the good work.She really means so much to us.

Awesome article, thanks for doing this for Lara Landon. I believe in her music and I feel her music can bring souls to Christ. Lara is a awesome woman of God.

Tony, yes, you see it too- Lara's gift. Her passion for Jesus and her ability as a singer/songwriter. I would really like to meet you someday.