Life.Church Worship: The multi-site church celebrating the goodness of God

Tony Cummings spoke to two of the worship leaders from the Oklahoma worship team, LIFE.CHURCH WORSHIP 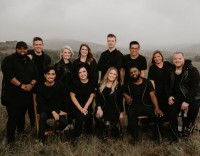 Life.Church is a multi-site church meeting at 33 physical locations in 10 states across the US. In addition, it's become something of an internet phenomenon as the online services are now accessed by a huge number of people around the world. With such a national and international reach, it was only a matter of time before their top-rate worship music impacted the Church community. This is now well and truly underway. The worship team of the youth ministry of Life.Church, Switch, have had a major Christian radio hit with the song "Symphony (ftg Dillon Chase)" while Life.Church Worship has produced a Cross Rhythms radio hit with the stirring anthem "We Lift You High".

Life.Church Worship's latest album, 'God So Good', is already getting glowing reviews. The Hallels website, for instance, wrote, "Put your headphones on and let the music of Life.Church Worship blast right through. Within the first few seconds, you will experience what singing for the glory of God is all about. Their vertical praises not only exude passion and truth, they sing as if their lives are a re-enactment of every word they sing." I had a chance to speak to worship leaders Dameon Aranda and Chris Kuti about Life.Church's expanding music ministry.

Tony: How was the 'God So Good' album put together?

Chris: "Well, the actual recording of the live album was done on one night, earlier this year, at the beginning of June. The pre-production was done the week before, but the songs had been in the works for over a year."

Tony: It must be a difficult song selection process, because you have an abundance of songwriters at your set of churches, haven't you?

Chris: "Yes, we have a ton. We probably have about seven or eight who contribute on a consistent basis, and so we have a process where we write and write and write. We wrote about 125 songs last year, and only 12 to 15 made the cut and started being sung live at all of our campuses. So that's less than 10% of the songs we write. It's one of those things where we really stepped on the gas the last two years on songwriting."

Tony: Are all the people singing on the album worship pastors in their own right?

Chris: "Yeah. As a church, we have 33 physical locations in 10 states. And at all those locations there is a worship pastor who is on staff. Life.Church Worship is essentially a collective of some of those pastors from our locations."

Tony: I should think that every worship pastor would love to get on the album. It must be a mad scramble to make it, there's a cut for the songs but there's also a cut for which singers are going to sing them, isn't there?

Chris: "We kind of suss out what we're going to do, like an A&R person would do. But it's more 'hey, what's going to serve the song the best?' Everybody's just happy to contribute in any way they can. So there's really no issue with who's going to do this and God just puts it on our leaders' hearts to be able to choose the right person to do it at the right time."

Tony: How does that A&R process work?

Chris: "There's about three or four people that delve into that process. I, for one, help figure out who's going to sing on which songs, so I A&R that way. But our overall head of worship here is JT Murrell. He really speaks about which songs are going to go on the album, as well as our Pastor of Operations here, Sam Roberts. They are removed from the whole songwriting. So they're not attached to anything and are able to make the right decisions most of the time."

Tony: One of the standouts on the latest album is "Where The Spirit Of The Lord Is". You can say God is always present through his Holy Spirit in every church gathering. In fact, he's present everywhere. But the fact is we need that powerful, experiential presence of the Lord in our church gatherings, don't we?

Chris: "We talk about this quite a lot. With faith in Jesus Christ, Christ promises the Holy Spirit. So for those who believe his presence is here - and it's not him that needs to do the showing up, it's us that needs to do the removal of the things that distract us from recognising it. And that is the cry of the song, it's also the understanding of the power that happens in our gatherings, that we would not, as Hebrews 10:25 says, 'forsake not the gathering of the assembly of believers'. Because there's power in our testimony, there's power in looking down the row and seeing somebody whose story you know, crying out to God in the midst of everything that they're facing. That shows my faith as well as theirs. That really is the heart of the song, that we recognise that where his Spirit is, there's power. There's power to overcome any circumstance. And where the gathering of believers is, his Spirit is present as well. And that alone is powerful. I'm thankful that that song is connecting. We're just so thankful that it's moved in our church."

Tony: Damian, tell me about a song which has got a strong personal connection for you.

Dameon: "There's a song called 'When I Say Jesus'. It's very personal for me, because the story starts when I was doing a funeral for one of my friends, and his wife was questioning whether she believed in Jesus or not and how she was going to go on. I remember saying to her, 'I don't know much but I know Jesus has really pulled me through so many things. There's so much darkness in the world, and it feels like there's so much darkness right now, but I'm telling you there is a light and his name is Jesus. Just call his name and I promise you, you will make it'. The next day we went with the team to go and do some songwriting, and that was the story that I told. Out of that story came the song 'When I Say Jesus'. That was just the simple thought: when I say Jesus, it shatters the darkness. It calms my soul. When I say Jesus, even a whisper, it breaks through my doubts and even my fears are gone. It's just one of those songs that actually started ministering to me after we wrote it because my father passed away about four or five months after we had written that song, and I remember going back specifically to those words as I was in my deepest grief. I was just so distraught, and I remember the promise in that song. And that's what that song's about. It's about hope in the promise of Jesus, and that when I say his name, everything is going to be okay."

Tony: Chris, tell me about another of the songs on the album.

Chris: "The title track of 'God So Good' is the thread that weaves all the songs together. There's goodness in every season. I think we can become numb to the fact that he is always, and will always, be good. That truth seems so simple, but it's his goodness that gets us through the times Damian was talking about. Goodness that sent Jesus, goodness that gives us grace every day, goodness that puts breath in our lungs. 'God So Good' has become an anthem for our church. We love it. And I think, if you want to call it a sleeper on the album, it's a toss-up between two songs, 'God So Good' and 'Grand Design'. That song is something really special. I was actually watching footage back from the live recording yesterday, and I was just so moved again by what God did in the moment that it was recorded. I'm just so glad we were able to capture it."

Tony: Is there a full-length live DVD planned?

Chris: "That's a great question. We've actually released the full experience on YouTube on 20th September. All the songs are on YouTube on our Life.Church channel."