Love & The Outcome: The Canadian duo declare "You Got This" 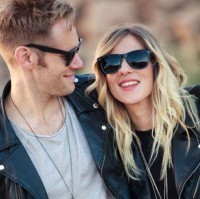 Now the couple, originally from Winnipeg, Canada and now based in Nashville, will be releasing through Curb/Word Entertainment on 6th March an EP 'You Got This' which follows on from their two successful albums 'Love & The Outcome' (2013) and 'These Are The Days' (2016). Jodi spoke about their forthcoming release: "Chris and I wrote 'Moving On' in a season of feeling stuck. In the middle of our frustrated prayers God reminds us that even when we feel stuck, he is still moving. As believers, we're never really stuck, we're just on pause for God's perspective. Once we get a glimpse of what he's up to, freedom comes flooding in." The couple recently debuted a music video for the 'You Got This' title track, in which their two young sons, Milo and Ziggy, steal the show.

In addition to debuting new music, Love & The Outcome are continuing to release regular episodes of their popular podcast that premiered in 2018. The podcast - available on Spotify and Apple Music-features the couple discussing relevant topics, offering encouragement and inviting listeners into their creative process. Recent guests were Christian authors Bob Goff and Rebekah Lyons. In March, Love & The Outcome will join 7eventh Time Down and Rhett Walker on the Ultimate PlaylistTour of the USA. And wherever they go they'll be striving to love and respect people.