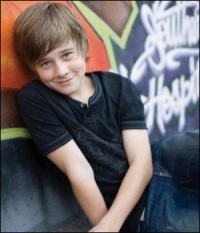 There are few CCM singers who begin their recording career at the age of 12, but then Luke Benward was a far from typical pre-teen. Born and raised in Franklin, Tennessee, he is the son of Aaron Benward and the grandson of Jeoffrey Benward who in the '90s released their own Christian music albums, both individually and as a duet together. Now 13, Luke has weighed in with his debut CD 'Let Your Love Out'. Christianity Today asked Luke, already a successful actor having appeared in the movies We Were Soldiers and Because Of Winn-Dixie, why he decided to record a CD. "Singing has always been a passion of mine. I thought it would be fun to do a record that I was proud of and would speak some truth to my generation."

So what role does faith play in his career decisions? He responded, "Faith plays a primary role. Every time we make a decision on a movie or TV role, my parents and I always pray together saying, 'God, if it's your will then let it be done.'"

Faith orientated music began in the Benward family tree with Jeoffery Benward, who by the mid-'80s was recording albums of inspirational balladry such as 'Jeoffery Benward' (Communication, 1985) and 'The Redeemer' (ForeFront, 1988). In 1992 the father and son duo Aaron Jeoffery were formed and their albums 'Aaron Jeoffery' (Starsong, 1994), 'After The Rain' (Starsong, 1996) and 'The Climb' (Starsong, 1997) produced radio hits like Dottie Rambo's "I Go To The Rock" and "We All Need". By 2000 both father and son released solo albums. Aaron Benward's 'Imagine' showcased some excellent soft rock tunes focussing on the general theme of recognising of what is possible through Christ. Wrote Encyclopedia Of Contemporary Christian Music, "Benward was perhaps affected by an event in 1999 when he, his wife and their children were unharmed by an accident that caused their truck to flip over four times."

As it turned out, it was acting not music which initially caught Luke's imagination. His first break was at the age of five, appearing along side Mel Gibson in the film We Were Soldiers. At six years of age, he was cast in the television pilot Life On The Water and by age seven starred in the television pilot for the WB series Family Affair featuring Tim Curry and Gary Cole. He was cast as the southern speaking, toothpick chewing Stevie Dewberry in the family film Because Of Winn Dixie at age eight. During the fall of 2006, movie goers laughed as Luke (Billy Forrester) choked down 10 worms in the hit movie How To Eat Fried Worms. Most recently, Benward played the brainy Charlie Tuttle, who invents a time machine that allows him to travel 48 hours into the past in Disney Channel's Minutemen.

Luke's other credits include commercials for McDonald's, Nintendo, Willy Wonka, American Express and Hamburger Helper. In 2003, he shared success with country music superstar Martina McBride when her music video "Concrete Angel", starring Benward, was nominated for a Grammy and won the award for Female Video Of The Year at the CMT Flameworthy Awards.

Christianity Today asked Luke whether he'd felt parental pressure to succeed in the entertainment industry. "No. My parents don't ever make me feel that way. They make it two different things - their success and my success. My career is similar to any other extra-curricular activity for any other kid."

Luke recently signed a production deal with In Crowd Productions who's collective credits include Hilary Duff, India Arie, Backstreet Boys, Mat Kearney, Death Cab For Cutie and the Jonas Brothers. His first release, a five-song EP 'Let Your Love Out', is an effervescent piece of pop which with Luke's unbroken voice sounds a bit like the Hansons.

Luke is keen to credit his mother and God in the success he has so far seen in the entertainment industry. He said, "I believe God has a plan for me in the entertainment world. But through the years my mom has not only supported me and been patient with me, she has helped me make wise decisions and become a serious actor. Everything I know she has taught me. She's the most amazing actress I know."

If anyone knows how to contact them, would you please pass along our information and ask them to contact us?

Thanks and may God bless you!

luke benward is so cool actor

Hey Luke u r amazing at singing i was really exicted to hear that a movie star that i absoulty ador is a christian just like me
p.s. i really enjoyed the ishine consert in may at the church of nazerine.

Hey Luke!! You are really good at singing, and I really like your Ishine shoe. I love it that you really like Jesus I do too. TTYL.Eva