IN a dimly lit rock club in Stourbridge a metal band are finishing their opening number. Their charismatic frontman addresses the crowd who are just picking their jaws off the floor from the explosion of power they have just witnessed. "LET'S GET ONE THING STRAIGHT RIGHT NOW!" bellows this Roaring Lamb. "WE ARE ALL CHRISTIANS IN THIS BAND AND WE CAN JUMP AROUND AND SHOUT WITHOUT SWEARING TO HAVE A GOOD TIME!" John G, the frontman of one Britain's hottest nu metal bands, Emergenza-winning Gen, turns to his band mates to begin the next sonic assault.

Welcome to the world of nu metal, the vehicle that along with punk has brought hard music back into the public eye. So what is nu metal? The term was invented by some unidentified journo somewhere looking for a way to identify the re-emergence of heavy music. It can better be classed as metal fused with other elements, most notably hip-hop, to form rapcore. But even that isn't the whole story. The evolution of nu metal can be traced back to Faith No More and the Beastie Boys who both started mixing rap with heavy metal and guitar riffs. As well as hip-hop another element that also normally goes into the melting pot is funk mostly from the bassist side of things. Flea of the Red Hot Chilli Peppers is a prime example of someone mixing a slap funk bass ingredient into hard music.

Another ingredient in nu metal were grunge pioneers Nirvana and particularly Kurt's different take on lyric writing, an approach which today pops up on many nu metal songs. Similarly influential were Rage Against The Machine who took rap metal and fused it with their sociological and political ideas. With the band Korn, nu metal found its particular stylistic focus, the early attempts at rap metal by Faith No More through the funk metal of early the Chillis and the political angst of Rage Against The Machine all playing their part. Korn from Bakersfield, California were also the guys who brought the seven string guitar from jazz into metal. The extra low b string can be seen used to excellent effect by two of Britain's best Christian guitarists, Mike Spear (Kosher) and Richy Styles (Gen). So what of the current crop of Christian nu metal bands? In America of course P.O.D. have enjoyed unprecedented success, while acts like Project 86, Pillar and Sweden's Blindside are all making a dent in the maintream.

UK wise there are three bands you need to look at nu metal, or metal fusion as I like to call it, who have the creative potential to make it into the CD racks alongside the top mainstream bands. With Kosher about to sign a major record deal and Gen having just released a truly brilliant debut album, clearly British Christian hard music is in its healthiest state for years.

Where can they be found? Cardiff 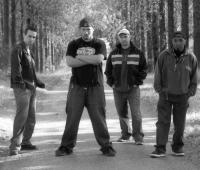 Some people have made the comparison of these guys with Limp Bizkit. In reality they are nothing like Fred Durst and his crew. Kosher is one of the hardest and hardest working bands I know. Their gritty determination has paid off with them getting a major record deal with Steel Works. Kosher are a band who do use the hip-hop metal crossover that nu metal first rode out on but they have taken it to a new level again, bringing a scratch deejay into the musical brew and featuring in Mo Sullivan one of the most arresting and challenging lyricists in Christendom. Kosher have always been seen as the most controversial in British hard music. To quote Mo in a recent interview, "Me gob always gets us into trouble." But Mo's renowned ability to step on theological and cultural corns is in many ways a John the Baptist gift, telling the Church what it needs, but doesn't want, to hear. Kosher are now concentrating in the mainstream taking their brand of hardnosed, hardcore music and a powerful message out into the clubs that need to hear it. After all, a doctor doesn't come for the well, he comes for the sick. Their forthcoming 'Rezzurekt' album could be a masterpiece.

Where can they be found? Solihull

Where can i download freely the music of Axlanbay and Kosher

good info and i would def like to hear these guys but the websites are wrong any way i can get a taste of what these guys sound like. thanks and def good info on the nu metal era