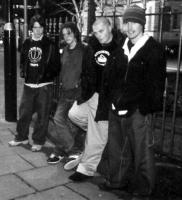 Gen, who have just released a killer album, their American produced 'Rite Of Refusal', and having won the British side of the major UK talent search Emergenza, are clearly on the way up to the bigtime. Gen have a passion about them that no one can stem and be it at Eddie's (a Yorkshire rock club) or an outreach in a local high school, the Gospel is always communicated when Gen take the stage. Gen don't really have a style and easily cover early rapcore, early P. O. D. -style with songs like "Exile" to the new evolution of nu metal of bands like System Of A Down (" Helix Doll" and "Hinting @ Nothing"). Flameboy also has one of the most dynamic voices since the likes of Benji Webbe going from sweet and innocent vocals to gruff dog-like barking screams and back again in seconds. Add John T's machine gun-like drumming and Andy's funk bass riffs underneath Richy's guitars and you have one of the most exciting sounds Britain has heard for years.

Where can they be found? Cardiff

Axlanbay arose like a phoenix from the ashes of Gareth and Luke's former band, pop rockers Eskimo Sunbed. As is similar with most nu-metal bands, they are a fusion of metal, rap and rock. Most commonly likened to Incubus and System Of A Down, Axlanbay are right in the middle of the Welsh metal/ rock revival. To quote Gareth, the reason he joined the band was "it was better than being a farmer." Axlanbay, like Kosher, are now heading more to the mainstream and have supported a few acts on tours such as Esther Alexander on her recent Yella Tour. Axlanbay have also headlined one of the CRN spin off Spring Rock Nights at the Upstairs at the Garage. And in case you didn't know, Axlanbay is "backslang" in backslang.

Where can i download freely the music of Axlanbay and Kosher

good info and i would def like to hear these guys but the websites are wrong any way i can get a taste of what these guys sound like. thanks and def good info on the nu metal era