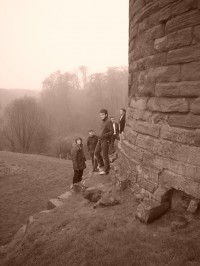 It's not often that a grassroots British band gets the opportunity to fly to America and play on the same bill as such acts as Third Day, MercyMe and the Newsboys. But that is what has happened to Lanarkshire's indie rock team Luma. This chance-of-a-lifetime came about when Luma entered the Kingdom Bound International Talent Search. A panel of judges saw them shortlisted with nine other acts at which time an online voting forum began. After a month with the public casting their votes Luma were declared the winners alongside US female harmony group Identity. Now Luma will be opening the massive Kingdom Bound festival in Buffalo, New York State on 6th August on he same bill as a bevy of top Christian music names. Not surprisingly, the band are excited about the opportunity. Says the band's bass player Liam Boyle, "Being part of this though has already given us exposure in the States that we would never otherwise have got. We were contacted during the voting period by a radio station in the States who had seen us listed on the Kingdom Bound website. Having listened to our music they requested a few signed CDs to give away on air and we have since been getting airplay as a result."

The group's singer Derek 'Del' McAlpine adds his thoughts: "We are greatly looking forward to this opportunity to play with bands such as Third Day and the Newsboys. It is surreal however to be recognised in the US where there is a very well established Christian music scene and not to have had the same success here where it should perhaps be easier to be recognised in a scene which hasn't got the same depth as it's US counterpart. We hope to impress another new set of people and perhaps make valuable contacts. ZoomAir have been kind enough to give us discounted flights also."

The origins of Luma go back to the childhood friendship of Del, Matt Brown and Ryan Ferrie (now the group's guitarists). Remembers Ryan, "We grew up playing computer games together, while listening to Oasis. Matt is only slightly better at Streetfighter than he is on guitar! Luma started when we decided we could do better than what our local pool hall juke box was blasting out one night. After a few text messages drummer Iain 'Dunky' Duncan was on board. We practiced and wrote material for about six months and then our bass player left due to study commitments... Liam was asked to join up and a few months later we were set to play our first gig at a Christian venue in Motherwell known as Lux. The first gig went down well and we gradually started playing more gigs in pubs, clubs and churches in and around Lanarkshire. Some memorable early achievements were winning the 2003 Lanarkshire Battle Of The Bands and playing to a packed Motherwell Civic Centre, next followed a support slot with Irish singer/songwriter Brian Houston, an artist who we really admire; we've played with him again recently and he is an awesome songwriter and performer, and a funny guy too!"

After playing some pretty rough venues around Glasgow, Luma landed the opportunity to play at the legendary venue King Tut's. Says Ryan, "King Tut's has a very cool history and is a great place to play, we've played there a few times now and you can't beat the atmosphere. We ventured through to Edinburgh's Liquid Rooms a few times and really enjoyed those gigs too. We performed live on Vic Galloway's show on Radio Scotland at the start of 2005, that was a very cool experience. We were invited to play at a snowboarding competition in Switzerland in February '06 and are heading to the US in August! We regularly play at youth events and Christian venues as well as pubs and clubs. We are happy to play just about anywhere... the band's "aim" is really to entertain people with well written and well performed songs. We were asked by a national newspaper recently if we were a "Christian rock band", a title that has immediate negative connotations.

"I guess we are a performance band who write songs that speak about our lives and experiences; as Christians it is inevitable that our experiences will be shaped and impacted by our faith and as a result our songs often carry a spiritual "message" or meaning, but we equally enjoy writing songs about girls, holidays and being bored at Uni. Being Christians in a band doesn't automatically remove you from reality (or at least it shouldn't!) and our songs reflect this - hopefully! We don't usually do covers but on some occasions we squeeze in a chorus that might fit with one of our songs, sometimes it's a Chris Tomlin song, sometimes it's a Chris Martin song!" 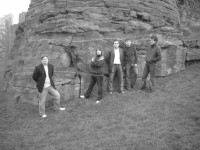 The band have so far cut two independent EPs, 'California' (2004) and 'Daytime TV' (2006). Liam speaks about these releases, "To anyone comparing 'Daytime TV' to our first EP 'California' there might not be a vast difference in feeling and sound, etc. This is partly due to the fact that we actually recorded the tracks for 'Daytime' quite soon after recording 'California'. This meant that we were recording songs which still had a bit of room for development and growth. As did we as a band. This wasn't an all together bad thing as it meant that there was a continuity in what was being released at a time when people are still getting to know who Luma are. However it lead to frustrations for us, as by the time it was released we knew that our sound had developed and that we would have new material that we would want to let people hear."

Del offers his views on 'Daytime TV': "The engineer, Stuart, was very experienced and was able to offer his thoughts and ideas, something that was never possible when recording the first EP. This is illustrated by the alternative mix of "Where You'll Find Me" which can be found tagged on at the end of the EP. The song "Daytime TV" was written whilst I was very bored in university and I feel it is a great little pop track and very catchy. "Don't Hang On" was pretty much the first song I ever wrote, so while it is catchy and straightforward, it perhaps shows a lack of maturity, but it is what it is, a three minute pop song. "Lonely" is probably the most overtly Christian song we have, and again perhaps shows a lack of maturity but again we feel it has its moments and again has a catchy hook. My favourite song on the EP is "Where You'll Find Me". I feel it shows a development in maturity in song writing both musically and lyrically. All of the band had input into the lyrics. It is a bit of an epic at seven and a half minutes but we feel it has a life message about no matter where you are God is always close. Or it could even be about a girl!"

Ryan is confident Luma's next recording will be their best yet. "It's our next EP that I'm most excited about! I don't know if every band thinks their most recent stuff is their best work, but we have three or four new songs that I love playing! Look out for the 'Blue Peter Garden' EP soon!"

In 2005 Luma made it to the final stages of the Ultimate Events talent search. Now Luma are making inroads on the festival circuit. Comments Liam, "This year has really seen us move out from only playing one-off gigs and starting to play at festivals. As well as Kingdom Bound we are also playing at Imagine Scotland and Greenbelt. Playing Greenbelt is a big one for us."

So what about the future for Luma? Says Ryan, "We have been building up a following online using MySpace and also iTunes, which has given us the opportunity to reach people outside of our gigs and a lot of the interest has come through being involved in Kingdom Bound. Perhaps someone will take an interest in us and help us get to where we want to be as it takes a lot of hard work from the guys in the band to get us where we are. That time could be better spent improving our songs and our live performance. Right now we're blessed to have some massive gigs coming up and having fun."

For more on Luma visit the Luma artist profile