MIC: The South African band with a new lineup and a new album

South Africa's most popular Christian band MIC are in Britain this summer. The band's Stephen Rothquel spoke to Tony Cummings. 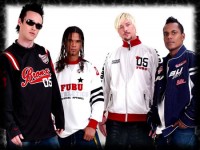 In November 1993 a group of teenagers from Durban, South Africa, released their debut album entitled simply 'MIC. In 2001 things have moved on significantly for the band. Not only is their new album 'Give You Love' currently getting mainstream radio play in their homeland, even peculiarly myopic Nashville has just acknowledged MIC's contribution to the scene, giving them a 2001 International Dove Award. Last year the group underwent significant changes. George Mhondera and Quintin Delport left MIC to join The Tribe and the South African band expanded to a five-piece. Judging from the snappy, urban-tinged pop sounds of 'Give You Love' the new MIC: founder members Stephen Rothquel and Gunther Schroeder and new boys Verdine Eaton, Samora Mbambo and Marlon Van Whye are MIC's strongest ever lineup. I spoke to Stephen within days of the band returning from an extended series of concerts in their homeland.

Tony: You're doing the Cross Rhythms festival this summer.

Stephen: We're looking forward to it. We had a great time last year so we are looking forward to coming back. We've been twice before and both times we've really enjoyed it. It's been a lot of fun. Also, great to get to know the people behind it. I think that counts for a lot.

Tony: Why the new direction?

Stephen: For the entire 10, 11 years we've been going myself and Gunther have been the two that have been driving the vision, driving where we decide to go. Through that 10 years we've had different people, not only band members but people who are on our crew, our lighting technicians, our sound technicians, people who join us and who share the same vision that we have. The last five years we've had a great stretch with Quintin and George, really got on well, shared a common goal, a common desire to do what we were doing. Then for them they just felt their season had come to an end and they wanted to move, had a great opportunity to relocate to England and be part of The Tribe. Gunther and I felt there was a lot more work for us to do, specifically with regard to this vision we feel God's given us for the young people in South Africa. So we felt there was reason enough and there was purpose enough for us to carry on. It's always hard to change but that's one of the ways God moulds our characters.

Throughout last year right from the very beginning I felt very strongly in my heart that God was calling us to do a lot more in our own country. We've always looked at ourselves as a ministry and seen ourselves as, yes, we want to be professional musicians, we want to do things of a high excellence. But the purpose for all of that is to communicate a message and we feel that the harvest is ripe here in South Africa. Young people need to have an opportunity to accept Jesus in their lives. We feel that God's created a platform with MIC to do that. Throughout last year I felt a pressing on my heart to set up something where we could be able to do a lot more in South Africa and to do it free. To do 60 shows every year for free for the young people of South Africa, to give them an opportunity to respond to the Gospel. So through that vision coming through and through Quintin and George feeling that their time was up, when that all culminated we felt well, we've got this vision in our hearts, we've got to carry on. So we went in search for guys who had the same heart, the same vision and they just happened to be all local boys which worked really nice for us. We had options in England, options in Cape Town, Johannesburg but God gave us some Durban boys from around the corner.

Tony: Presumably the first thing you had to do when you got the new line up was to begin work on recording the new album. Is that right?

Stephen: Yes, we basically went straight into that. We had started recording an album with Quintin and George and had done the first single, 'I Am Yours', and were moving on. So when these guys joined we started writing some new material and putting together a package that would in a sense say fairwell to Quintin and George by putting on the original 'I Am Yours' version and putting on two acoustic tracks with them on but then also showcasing the new guys and trying to lift the whole MIC music department to another notch.

Tony: It seems to have a very fresh and contemporary, R&B-influenced pop sound but also it seems to be quite worship orientated. A lot of the songs are clearly worship songs, but worship songs almost in a new style. You could almost say it was a worship album, couldn't you?

Stephen: The aim originally was, 'Let's do a worship album.' Most people when they think of MIC doing a worship album, even record companies, they immediately think, choose the 10 top happening worship songs, make sure you include 'Shout To The Lord' and do another 'Remix 2001' or something and do them MIC style. To be honest, that's what we intended but with both Gunther and I we find we can't do that. We've gotta stick something fresh in there. We found that we were writing more and more original songs and we decided to make an MIC worship album. I wrote a little note on the album saying that our dream for the album was not that people would listen and say, 'Oh yes, they're great songs that we could sing in church,' but more that young people would find themselves standing in their living rooms and bedrooms singing these songs and worshipping God. 'I'm gonna follow you/Do what you want me to/I'm never gonna stop/I'm gonna give all I've got... These are all songs on the album, songs that are directly talking to God, 'I am yours and you are mine.' Songs that uplift your relationship with God and we want that to happen in people's homes. We don't want people to always have to go to big concerts or meetings or church events but to actually begin to learn to worship God as a lifestyle. Our hope is that that has come out of the album.

Tony: You've now had an opportunity to work your vision through because you've recently done an extensive tour of South Africa, haven't you? How many concerts have you actually done?

Stephen: In the last two months we have done 59 performances taking us to churches, to schools, to television events, a number of different ones. Within all of that we've done 21 free all access concerts in school halls where we've seen over 20,000 young people attend those concerts and over 750 respond to the Gospel. I tell you, man, if ever you've wanted confirmation that you were doing the right thing it's there in front of us.

James Mawdsley: The 28 year old backpacker who was locked up in Burma

hi my name is zahra greyvenstien i was a small when you guys pefromed at the ethearbeth childrens home you guys give us a cv when it had a few songs on i was so inlove with the mucis that it got marks and didnt want to play. the point of my stroying now that im 26 years i want to buy your cv but some how i cant find the cv that you gave us.... please could you help me and send me a address where i could find thank you so much for being my inspertion