Despite having been on the scene for some time now, this year saw the release of Co Armagh worshippers the Mark Ferguson Band's first full length album 'Dust' - a collection of songs that had previously formed part of the group's live set since their formation in 2007. Described as both powerful and meditational, many of the tracks on the album have become firm favourites in churches the length and breadth of both the band's native Northern Ireland and the neighbouring Republic with countless people continually asking where and when they would be able to get their hands on recorded versions of songs that have touched their hearts and brought them closer to God.

For the band's front man Mark Ferguson, the success and critical acclaim of 'Dust' has certainly been no overnight phenomenon with the Portadown-based singer/songwriter, guitarist and keyboard player having honed his skills in a career that, in addition to a raft of live appearances over the years, has also seen two preliminary EP releases. Both the 2007 solo venture 'Open My Lips' and its full band successor the following year 'Your Name On My Lips' have served to whet the appetite of those who had experienced Mark's songs in a live setting and essentially paved the way for an album that sees Mark and his team hit full stride.

As well as its eponymous leader, the Mark Ferguson Band also consists of guitarist James 'Jimbo' Donaldson and brothers Tim and Matt Duke on bass and drums respectively but it's clear that the other members of the outfit are not there to merely make up the numbers, as Mark explains when I ask him what he enjoyed most about recording 'Dust'.

"Some of the highlights of making the 'Dust' album were just being with the other guys in the band," he comments. "As a band, we got closer as friends as well as spiritually and musically. Also, hearing a song that you've had in your head and you've maybe written in your bedroom then hearing it with the band is really special. It's nice to see the band take one of my songs and take it somewhere I didn't think it would go. Writing a song can be a very intimate and personal thing but the trick is letting go of it so that it becomes intimate and personal for everybody." 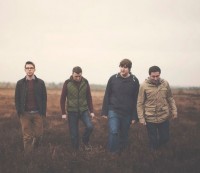 I ask Mark how it all started. "Back in 2007, there was a street evangelism project taking place in Portadown and the folks organising it needed a band for the week. That's how myself and Matt came together and then Jimbo on guitar and Tim on bass joined a little bit later. We didn't really set out to form a band - it kind of just happened in a roundabout way.

"The purpose of the band has evolved over the years," Mark continues. "It's meant different things at different times but the main focus has always been God-centred worship and trying to facilitate worship for people. We want to give people the opportunity to connect with God and to sing to him. We also try not to be of any one style or denomination - not trying to just appeal to young people but maybe taking old hymns and doing them in a new way for older folk to connect with."

I ask Mark how he balances having God as the main focus of his music with the appeal of being on a stage and having an album out. "Well, it's certainly not a performance thing," he clarifies. "It wouldn't be for us to take any glory from what we do. I've always struggled with standing up at the front and explaining we've got a CD for sale. It makes me shudder in many ways as it sounds so commercial but we've come to terms with the fact that this is about God and he's given us this gifting. It makes sense to promote and get it out there to as many people as possible because we want God to take it and use it in as big a way as he sees fit."

Whilst church venues make up the lion's share of the Mark Ferguson Band's live schedule, recent times have seen the group ply their trade in a number of more unusual settings. "We've played in shopping centres as well as more traditional places like churches and open air festivals," Mark advises. "At the moment, our local council are putting on an open air celebration concert featuring 2011 X Factor singer Amelia Lily and we've been asked to be on the bill. In short, we could end up playing anywhere and it's lovely to get opportunities in the secular environment as well."

Having built up a healthy following, it appears that there is quite an appetite for the songs that ultimately ended up on 'Dust', as Mark explains in typical self-effacing fashion: "There were quite a lot of people waiting for the album because they'd heard us play the songs live and the feedback about 'Dust' has generally been very good and really positive. We try to take that and give it back to God rather than taking the praise ourselves though. When I catch myself listening to some of the songs on the album, it feels like I didn't write them. They're God-given songs so there would be no reason for me to get big-headed."

I press Mark to name the song that means the most to him. "I suppose the most personal song on the album for me is 'Dark Clouds' which was written at a time when things went pear-shaped and, without going into the whole story, myself and my wife had to move out of our house and I had lost my car and had no job. Everything was going wrong and it was a very dark, difficult time for us. That song tackled the question of whether or not I still believed in God and, if I did, where was he. It's a bit like one of the psalms that David might have written that shouts at God and asks him to show himself. Thankfully, we've now come out the other side and I'm glad to say we're still in the same house and I have a wonderful job working as a music teacher with special needs kids. It's so clear that God was in it all and that's why, at the end of that song, it says 'you have saved me'. Even though we can't see everything at the time, God is in control."

With an upcoming support slot for American Christian bluegrass exponents the Isaacs later this year to look forward to as well as a steady supply of new songs, Mark is assured that God is in control of his music ministry too. "God has been amazing by giving us fresh songs," he adds in closing. "We've already been using some of them locally and people have been asking us where they can find them. Here's hoping we'll be able to record a follow up to 'Dust' soon. I wouldn't like to leave it so long this time!"